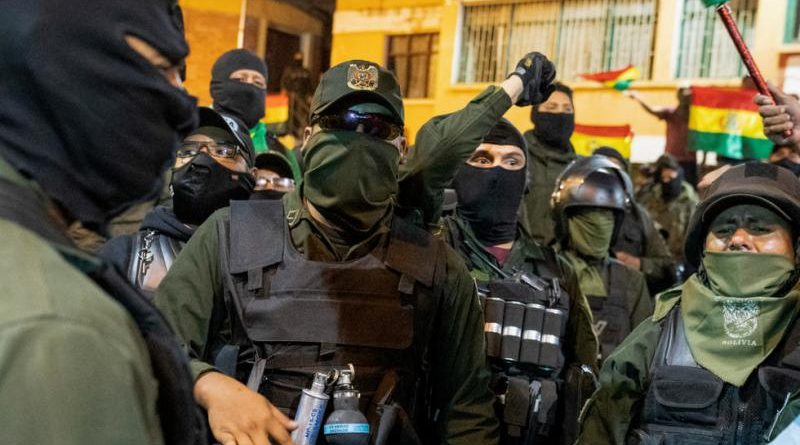 The successful regime change operation that was just carried out in Bolivia throughout the course of the country’s ongoing US-backed Hybrid War could have some game-changing geostrategic consequences if the coup “authorities” renege on the previous agreements that President Morales signed with Russia and China, especially in the lithium industry, as well as if they enable their new American patron to use their centrally positioned state in the continental heartland as a platform for spreading its divide-and-rule influence all throughout the rest of South America.

“The Hybrid War On Bolivia Succeeded In Carrying Out Regime Change” against democratically re-elected and legitimate President Morales, and the geostrategic consequences of this military coup could potentially be far-reaching. It first of all represents the belated success of the “Guaido Model” whereby a previously little-known politician (in the Bolivian context, Second Vice Speaker of the Senate Jeanine Añez) declares themselves “president” before, during, or after a Color Revolution and is installed in power with the help of military forces that betrayed the constitution, which didn’t work in Venezuela because of that country’s strong civic-military union but was pulled off in Bolivia precisely because the latter lacked the aforesaid, according to Venezuelan-Canadian freelance writer and activist Nino Pagliccia. Regional states much weaker than Venezuela could therefore fall victim to this regime change scenario, meaning that any potential gains that genuine grassroots forces might make in the ongoing so-called “South American Spring” could turn out to be temporary and possibly reversed so long as US spy agencies retain control of the military-intelligence faction of their “deep states”.

The author earlier identified Bolivia as the most strategically positioned state in South America in his June 2017 analysis about the continent’s geopolitics, pointing out how the Andean nation is integral for any regional integration initiatives to succeed. This holds true not only for institutions such as Mercosur, but also for connectivity projects such as the Chinese-backed “Trans-Oceanic Railroad” (TORR) that’s planned to cut through the country in linking the Brazilian Atlantic coast with the Peruvian Pacific one. The US, especially under the Trump Administration, is adamantly opposed to all of the New Silk Roads being built under the umbrella of China’s Belt & Road Initiative (BRI), so it can’t be discounted that the pro-American coup “authorities” might renege on their previous agreements with the People’s Republic in this respect and possibly even go as far as “recognizing” Taiwan instead. That dramatic diplomatic pivot could be encouraged by the US in order to capsize China’s $2.3 billion lithium deal that was clinched with Bolivia earlier this year, as well as to undermine their space and security cooperation since Beijing couldn’t continue these strategic projects in that scenario.

Russia also stands to lose some of its influence in the event that the coup-imposed “authorities” renege on their previous cooperation agreements with it too. The Eurasian Great Power has strategic interests in Bolivia’s lithium resources just like China does, which the author analyzed in his piece for Global Research over the summer about how “Russia’s Bolivia Gambit Is A Bold Economic Move”. The developing Russian-Chinese condominium over Bolivia’s lithium resources could have seen both multipolar leaders collectively asserting their technological independence in the forthcoming era of electric vehicles and thus preventing the West from becoming the dominant force in this industry. Lithium, it should be pointed out, is a required component of the batteries that store the electric power in those vehicles, and it’s actually much more important than cobalt (some of which is extracted by 35,000 Congolese child slaves) since the latter is being progressively phased out and replaced by other minerals that are more ethical, less costly, and more reliable from a supply chain standpoint. As it so happens, Bolivia has one of the world’s largest lithium reserves, thus making it disproportionately strategic.

RELATED CONTENT: Indigenous Women: “It’s not About a man: it’s About a People”

The author drew attention to this back in August 2016 in one of his Context Countdown analyses for Sputnik that was transcribed and republished by Global Research under the title “Lithium, A Strategic Resource: Here’s Why The US Wants To Break Bolivia To Bits With Hybrid War“, which presciently predicted some of the domestic fault lines that would later be exploited by the US during the latest Hybrid War in pursuit of obtaining control over this strategic resource. That piece came several months after the author first identified Bolivia as a likely victim of the US’ global Hybrid War campaign in a March 2016 forecast for Oriental Review about “Predicting The Next Hybrid Wars“, which was the third chapter in his “Law Of Hybrid Warfare” e-book series covering both the Eastern Hemisphere and Western Hemisphere. In hindsight, it therefore wasn’t surprising whatsoever that the US would target Bolivia for regime change since it always wanted to dominate the global lithium industry and create a geostrategic wedge for perpetuating its historic divide-and-rule policy in South America, both of which are in the process of being accomplished after the recent military coup.

As such, it remains to be seen whether the Russian and Chinese governments will recognize the de-facto results of this regime change operation despite its outcome being totally illegal by both domestic and international standards. On the one hand, they might believe that recognizing the coup-imposed “authorities” could prevent them from reneging on the aforementioned strategic agreements that these two Great Powers reached with Bolivia, while on the other, doing so might weaken their case for taking these same “authorities” to international court in the event that they do indeed renege on those deals. Russia and China are therefore in a very tricky position because the new “authorities” might use those agreements as blackmail for receiving those two’s recognition (as well as threatening to “recognize” Taiwan unless China bestows them recognition in the near future first), which would greatly “legitimize” the US’ Hybrid War on Bolivia as well as any forthcoming ones in the region and elsewhere that it successfully wages. From the Russian and Chinese positions, however, there’s no guarantee that those “authorities” will keep their word and won’t ditch the deals right afterwards.

From Great Powers To Passive Observers

Objectively speaking, the US has much more influence over the current Bolivian “authorities” than either Russia or China do, so it would ultimately come down to whether Washington has the “goodwill” to “allow” La Paz to respect those agreements or not, which is extremely unlikely. Neither of those two Great Powers could realistically reverse their prospective recognition of the coup “authorities” if the latter pull out of the agreements because it would then reveal their intentions in recognizing them in the first place to have been entirely self-serving and therefore harm their soft power standing across the world. Considering this, the optimal approach that they might choose to apply could be to maintain pragmatic working contacts with the new “authorities” but withhold recognition until the outcome of UN-recognized free and fair elections. The “politically inconvenient” fact is that neither Russia nor China have the capability to influence the course of events in Bolivia in one way or the other even if they had the political will to do so, so they’re essentially powerless to intervene and are thus nothing more than passive observers, albeit ones who stand to lose a whole lot if everything continues to go awry.