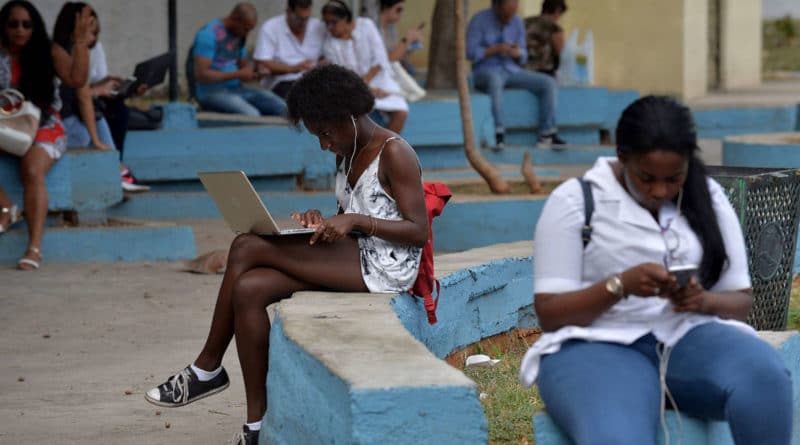 Trinidad, Cuba — Sitting at an outdoor café, Alian Rojas deftly thumbs the small keyboard on his iPhone as he calls up The New York Times website. Then he shows a reporter how easily he can use WhatsApp, Facebook, YouTube.

Cubans can even download the Miami Herald‘s Spanish-language El Nuevo Herald, infamous as a font of anti-Cuban government reporting. They can use Signal, an encrypted messaging app developed by Edward Snowden and others, which prevents even the U.S. government from eavesdropping.

“Cuba remains one of the world’s least connected and most repressive environments for information and communication technologies,” according to a Freedom House report on internet usage.

That claim plays well to those who assume that governments led by communist parties must, by definition, be totalitarian. As Rojas’s ready access to a wide array of sites shows, however, Cuba’s reality is far different.

As of January 2020, in a survey by the Open Observatory of Network Interference (OONI), an international group monitoring internet censorship, the Cuban government blocked only 36 websites.

Most are sites created by U.S.-supported dissidents such as blogger Yoani Sanchez and the Ladies in White, a group that organizes anti-government protests in Cuba. However, Cubans who really want to read such sites can easily download a VPN (Virtual Private Network), which allows unfettered internet access.

Ironically, as part of enforcing the unilateral embargo of Cuba, the U.S. government prohibits Cubans from using hundreds of commercial websites, including Amazon, computer companies and banks. The U.S. government blocks more websites than the Cuban authorities, says John Nichols, a Cuba expert and professor emeritus at Penn State University.

Ironically, as part of enforcing the unilateral embargo of Cuba, the U.S. government prohibits Cubans from using hundreds of commercial websites.

“The U.S. government has long criticized Cuba for violations of human rights,” he tells Truthout, “yet the U.S. policy response restricting the right of both U.S. and Cuban people to freely communicate via the internet is both hypocritical and counterproductive.”

However, due to economic conditions, Cuba faces real problems with technology, leaving it well behind the U.S. and even much of Latin America. Only 38 percent of Cubans are connected to the web compared to 70 percent for all of Latin America. Cuba only recently made roaming available, and it installed a 3G (third generation) network. Much of the world is switching over to 5G this year.

As a practical matter, many ordinary Cubans can send email and do Google searches but most don’t have the bandwidth to watch streaming movies or TV.

Nichols said the problem stems more from a lack of hard currency rather than an attempt to restrict internet access for political reasons.

“Cuba is not a rich country and the internet is a huge economic investment,” he said. “Cuba doesn’t have a lot of resources. But the country won’t develop economically without it.”

The Cuban government would like to expand internet usage as part of a plan to develop new computer-related industries. Cuba’s free education system has produced high-caliber computer scientists anxious to compete with their peers worldwide. Cuban President Miguel Diaz-Canel, who came into office last year, has been promoting computer sciences.

At the same time, however, Cuban leaders worry that the U.S. will use the internet to undermine the government. They are wary of “Twitter revolutions” promoted by the U.S. in other parts of the world.

“Some in government oppose too wide a diversity in political views,” a U.S. reporter based in Havana told Truthout. “But they know you can’t ban the internet.”

Meanwhile, Cuban leaders who fear the U.S. will use the web to promote anti-government activity are not engaging in conspiracy theories.

Nichols noted that the CIA and other U.S. agencies have a long history of utilizing technology to spread anti-communist propaganda on the island. In the 1960s, it was radio; by the 1980s it was TV.

If right-wing Cubans in south Florida flood the island with internet propaganda and fake news, the government might increase censorship.

In the early 2010s, the Office of Cuba Broadcasting, the U.S. government agency in charge of propaganda broadcasts to Cuba, smuggled in smart phones loaded with apps called ZunZuneo and Piramideo, which sought to mobilize Cubans to create a Cuban version of the Arab Spring.

“My students started getting text messages on their cell phones with news reports about demonstrations that never happened,” said Nestor Garcia, former head of Cuba’s Mission to the UN. “The U.S. is trying to create a climate to protest against the Cuban government.”

The social media apps failed to spark rebellion, but that didn’t stop the U.S.

In 2018 the Office of Cuba Broadcasting funded creation of phony Facebook pages designed to appear as if they were posted by Cubans discontented with the government. When Russian hackers carried out similar activities during the 2016 U.S. presidential elections, U.S. politicians across the political spectrum expressed outrage.

U.S. actions against Cuba are similar to Russia’s actions against the U.S., according to Nichols. “It’s covert interference in the communications system of another country for the purpose of changing the relationship of the government and people,” he said. “If we do not like others interfering in our domestic affairs, it only makes sense we shouldn’t do the same to other countries.”

Cuba has made steady progress in internet access. In the 1990s the vast majority of Cubans had little or no connectivity. A fast connection cost $12 per hour and was available only at tourist hotels. In 2020 Cubans can now subscribe to a roaming plan for as little as $7 per month.

Some Cubans with internet access participate in chat groups and log onto a restaurant food delivery service, AlaMesa. But by far the most popular technology for Cubans is the “Paquete” (Packet), a weekly offering of news and entertainment. For as little as 50 cents one can download to a memory stick the latest international newspapers, magazines, movies, and TV shows — without government censorship.

Nichols said the Cuban government remains pragmatic when it comes to censorship. If right-wing Cubans in south Florida flood the island with internet propaganda and fake news, the government might increase censorship.

“Whether they block websites depends on who is using the internet for what purposes,” he said.

For the moment, however, it uses a light touch.

Featured image: People use their phones and laptops to connect to the internet at a park in Havana, Cuba, on December 5, 2018. YAMIL LAGE / AFP VIA GETTY IMAGES