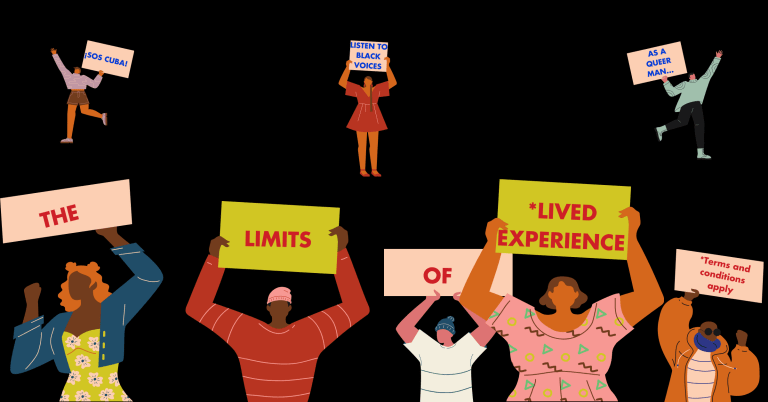 Online, the “left” continues to find itself in a never ending series of bad faith arguments around self-determination. Many terms/frameworks that may have had a subversive character within their original context when first articulated, have now been incorporated and distorted by liberalism encouraging radical individualism and anti-materialism. More and more, analyses that are dependent upon identity and “lived experience” are propped up, ultimately resulting in ad hominems, mud-slinging, intellectual dishonesty, and the inevitable tried-and-true anti-communism.

Anti-communist rhetoric from self-identifying socialists/communists is not new, but the relatively recent trend of rejecting revolutionary theory in favor of “lived experience” shows a lack in our processes for political education. The discourse following the protests that took place in Cuba on July 11th offers us a concrete example of this lack. Inside of the US, as anti-imperialist organizations and individuals worked to develop principled positions in response to the protests, counter-revolutionary forces, ranging from borgouise media, university academics, and anti-communist Cubans in Miami, were able to push their own narrative by abusing the device of “lived experience”. The demand was that everyone should “shut up and listen to Cuban voices”. However, at no point was a distinction made among which of those voices we should be listening. Should people listen to liberal Cuban voices? Should people listen to socialist Cuban voices? Should people listen to Cuban voices in Miami? More often than not, the answer to those questions is covertly the latter.

By dominating public discourse using identity (Afro-Cubans) as a weapon, history is negated. No account is taken for the relationship between Cubans, the Cuban state or it’s ongoing processes post-revolution. Therefore, a proper anti-imperialist response is thwarted because proper investigation has not occured. The scientific process has been denied. Amilcar Cabral understood this as the struggle against our own weaknesses. In his 1966 speech, The Weapon of Theory, Cabral says,

“When the African peoples say in their simple language that “no matter how hot the water from your well, it will not cook your rice,” they express with singular simplicity a fundamental principle, not only of physics, but also of political science. We know that the development of a phenomenon in movement, whatever its external appearance, depends mainly on its internal characteristics. We also know that on the political level our own reality — however fine and attractive the reality of others may be — can only be transformed by detailed knowledge of it, by our own efforts, by our own sacrifices.”

RELATED CONTENT: How the US Government Stokes Racial Tensions in Cuba and Around the World

In Cuba’s case, identity reductionism and a collaborated bastardization of afro-pessimism and abolition instead pushed forward lazy analyses from many “leftists”. This not only rejects historical and contemporary context around what influences current conditions in Cuba, but aligned with the continuous US aggression towards the island.

Much of this confusion is made possible through political education processes that discourage people from engaging Marxism negating how African revolutionaries, whose works we understand are vital (like Castro, Jackson, Bishop, Sankara, Nkrumah, Machel, etc) engaged and used those texts to come to understand their own conditions. Understanding that materialist theory is a culmination of many lived experiences that help us scientifically analyze our material conditions is crucial to navigating the world as is. Instead, “leftists” are evoking “lived experience”, not as enhancement or strengthening of material analysis, but as a substitution for material analysis, thus allowing for subjects to become personal and individualized while overlooking historical truths. When Walter Rodney was engaged in struggle while in Tanzania, he took up a number of the debates which were happening in the revolutionary state, while also knowing his place as an outsider and not overstepping. He discusses this issue in the Tanzanian socialist state pretty precisely as a struggle between idealism and materialism. For Rodney, this divide represented a class divide between bourgeois/individualist and proletarian/peasant contradictions:

“Therefore one found there’s tremendous conflict taking place between bourgeois knowledge and scientific analysis which derived from looking at the actual practice of the producer classes in Tanzania and in the world at large at this particular point in time. Some of the questions were of theory; they had to address themselves to the whole plethora of bourgeois knowledge and understand its methodology, its perceptions, to understand the struggle between idealism and materialism.”

RELATED CONTENT: Cuba: The Island at the Center of the Conspiracy – Interview with Ramón Labañino

Dialectical-materialism suggests that human knowledge can in no way be abstracted from practice if there is an understanding that the material basis of a reality is constantly changing. Undoubtedly, one’s impressions of society are intricately linked to society itself. Analysis and abstraction are interwoven and that must be taken into context. Lived experience, however, is flawed because non-materialist attitudes have formed opinions based on first hand accounts around issues, like patriarchy and racism, but not from the point of view of global movement. Moreover, a rejection of scientific approaches, rigorous analytic tools, and abandonment of returning to the source (i.e. traditional methods) has bore outright anti-materialist sentiment. At best, lived experiences can serve as anecdotal impressions of what it’s like to be a member of an oppressed group, but they are not inherently true, ethical, moral or correct simply because they come from a member of a colonized/oppressed group. Furthermore there are outright reactionary lived experiences being pushed forward serving as anecdotes.

The commonly retorted, “Listen to the people of [insert group]” statement is void of analyzing the class character of the people and voices being elevated. This places emphasis on individuals and not what is actually occurring, because the lens to view it through is blurred by varying interests. This is the exact issue with relying on lived experience as an analytical tool.

Material analysis should correctly apply dialectical materialism to a particular problem. One thing “the left” can agree on is a changed society, but that change can not come without knowing how society functions. That requires an observation and analysis of class, national, ethnic and cultural characteristics of a society, not an emotional appeal with no material basis. That requires a scientific analysis that is far removed from an individual point of view that evades the fact that ‘experience’ cannot adequately describe the material structures that dominate our lives. Society isn’t a collection of individual experiences informed by nothing. Experiences are foundational, but they are not pure. Outside factors always mediate the lived experience. The best way to begin to understand this is an emphasis on fundamental political education that emphasizes the material basis of a reality in constant change.

Erica Caines is a poet, writer and organizer in Baltimore and the DMV. She is an organizing committee member of the anti war coalition, the Black Alliance For Peace as well as an outreach member of the Black centered Ujima People’s Progress Party. Caines founded Liberation Through Reading in 2017 as a way to provide Black children with books that represent them and created the extension, a book club entitled Liberation Through Reading BC, to strengthen political education online and in our communities.