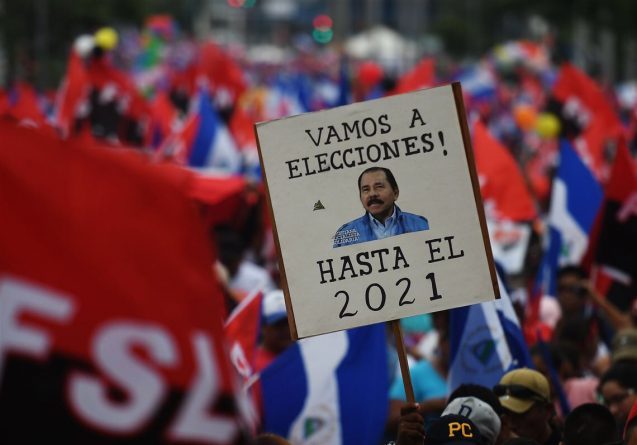 The intense focus on the “ills” of Nicaragua completely misses the deep issues of continued US intervention – imperial neocolonialism – into the sovereign lives of other countries, as here with Nicaragua. Whether you love or hate Daniel Ortega and Rosario Murillo, their personalities and personal lives are not the issue, whatsoever.

For US Americans to be so closely scrutinizing clearly the most progressive government in Central America, ignoring the new US friendly but unpopular president of Costa Rica, Carlos Alvarado Quesada; the systematic violence in the streets of El Salvador which is directly related to the US funded death squad governments of the 1980s; the repressive and illegal President of Honduras, Juan Orlando Hernandez; and the repressive and corrupt government of Guatemala under President Jimmy Morales, is very interesting, and disturbing.

The elaborate, well-planned conspiracy behind the April-July 2018 US-orchestrated coup attempt against Nicaragua, included most of the church hierarchy, many wealthy ex-Somocistas, many NGOs including the European-funded CENIDH, the NED (National Endowment for Democracy) and USAID, and a couple thousand young Nicaraguans trained over 4 years in the use of social media to blitzkrieg an agenda-loaded propaganda campaign when the right opportunity arose. It had been in the works since at least 2011 when Nicaraguan Felix Maradiaga teamed up with Colombian narco-trafficker Julio Cesar Paz Varela to develop a drug distribution network in Nicaragua, many of the proceeds of which were to be devoted to overthrow the Sandinista government.

The facts are that the few NGOs (of over 4,000 NGOs in the country) who have recently been curtailed by the Nicaraguangovernment, is because of their support of various criminal activities designed to overthrow the government. Their accountability to the law was long overdue. The same goes for several TV stations (funded largely by NED), the internet news outlet Confidencial (funded by the NED), and La Prensa (funded by NED) which have openly supported opposition “terrorist” activities (yes, that is correct), something that would never be tolerated in the US or in virtually any country. Many of the hundreds participating in dozens of murders, arsons, destruction of buildings, tortures, and destruction of equipment (including over 50 ambulances), etc., committed by Opposition members, are fortunately now on trial or in jail. Over 200 fugitives remain in Costa Rica.

It is also ironical, that those people in the US who are so condemnatory of the Nicaraguan government, remain comfortably removed from the terror campaign, April-July, which was awful as I can attest as a resident, while I was forced to read and view, with rage and anger, the spew of scripted lies days after day on social media, and major media outlets, not based on any actual investigative reporting. Ironic, because the US is one of the most oligarchic, non-democratic countries on the planet, and its citizens possess no legal or moral authority to judge others. The US possesses the largest prison per capita population in the world, with 80,000 of prisoners in solitary confinement; it produces the most waste and pollution; it has military troops in 150 countries, and war  planes and ships everywhere; it is the wholesale terrorist force on the Planet; it has on average 3 citizens a day murdered by US police; it has a president who has been accused by over 15 women of sexual misconduct/assault, a president who lies multiple times each day; it is a country where student debt keeps graduates in a kind of servitude for life to the banks; it has thousands of homeless living in tents and abandoned cars in virtually every city; it is a country without accessible health care for millions of its citizens; etc. It has a political election process unreliable due to systematic voter suppression, gerrymandered Congressional districts every ten years, privatization of the voter counting process, while the process itself is literally owned by the millions and billions of dollars of the rich and mighty, headed by the military industrial complex that makes obscene profits on intervening everywhere.

So, Nicaragua is an easy center of focus. If any one of us, or any other Central American government, was subjected to the intense efforts to destroy us, or any country, then one can predict the likely consequences. Neighboring Honduras has not yet recovered from the 2009 US sanctioned coup of President Zelaya. The fear and the repression there is horrendous, but it seems that with those in the US, including in the government, nobody gives a shit? The NICA Act should be the HICA Act for Honduras instead of Nicaragua. But Honduras is a safe Cry Uncle government, despite the fact that the people live in constant fear.

And the idea of name calling people as usual is not helpful in the discussion. Catherine Cusic, who has called Camilo Mejia a liar, has called me several times as an idiot – then, in the past, and now.  Not too constructive for healthy debate.

When will the issue of US imperialism be taken seriously, and a recognition that the US political economy is so destructive it is on a path to destroy the planet? And, yet, the most progressive country in Central America (where there really is NOT repression) – Nicaragua –  with no friends in the Senate or House of Representatives, very little support in the solidarity community, and only supported by the ALBA countries of Cuba, Venezuela, and Bolivia, is targeted for destruction. Lies, lies, more lies. Disgusting beyond disgusting. The truth as I have documented is virtually the exact opposite of what most social media and major media organs spew as if reading from a script. Joseph Goebbels, Hitler’s Propaganda Minister, is famous for saying that a lie told enough times becomes the truth. Goebbels principle has come once again to haunt Nicaragua. And the US govt. has spent millions of dollars through NED, US AID, NGOs, etc., at least since 2014, getting ready for the overthrow of a progressive government, primarily because it IS progressive compared to the other Central American governments. It is not a Cry Uncle government. And despite the lies, the Sandinista government remains popular with a majority of the people, similar to Assad in Syria despite intense western media propaganda against him.

So, Libya, The Ivory Coast, the Ukraine, Venezuela, Russia, and on and on, are touted as enemies, subject to the “exceptional” US to seek their overthrow to “correct” matters,  if they haven’t already succeeded. It is interesting that Trump’s fanatical security adviser, John Bolton, has identified the Troika of Cuba, Venezuela, and Nicaragua (and soon Bolivia) to be targets as threats to the national security of the US. So preposterous yet it is official US policy.

Astonishing, absurd, and criminal. So continue, folks, focusing on the issues you have with Ortega-Murillo, while the US continues on an uncontrolled imperial savagery. Meanwhile, feel smug with your support of “humanitarian intervention” by the most dangerous country on Earth.

S. Brian Willson, as a 1st lieutenant, served as commander of a US Air Force combat security police unit in Viet Nam’s Mekong Delta in 1969. He is a trained lawyer who has been an anti-war, peace and justice activist for more than forty years. His psychohistorical memoir, “Blood On The Tracks: The Life and Times of S. Brian Willson” was published in 2011 by PM Press. A long time member of Veterans For Peace, he currently resides in Portland, Oregon