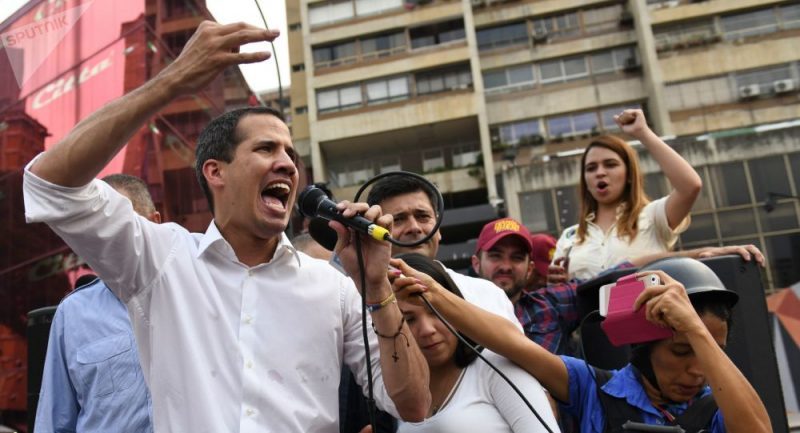 The Venezuelan right has a pattern of repeated behavior: it poses all or nothing strategies without having the conditions to achieve them. It happened previously in 2017 and has happened again in 2019. On both occasions it called its followers to overthrow Nicolás Maduro without opening the possibility of an intermediate negotiation.

In 2017 the result was a defeat with domino effect that resulted in frontal internal disputes and electoral failures. At this moment the question is: will the same thing happen? That possibility operates as a desperate accelerator in some of its ranks.

This new assault has a variable that complicates the picture: the design of a parallel government without the capacity to govern internally, but with partial international diplomatic recognition and as a way to legalize unilateral US aggressions.

How to undo the construction of Juan Guaidó as interim president with his representatives in organizations such as the OAS and recognized as ambassadors in several countries? The play was proposed as a point of no return to a wrong reading of the battlefield.

This initial error was calculated on bases similar to 2017: underestimation of Chavismo as a force with identity and social roots, reduction of the leadership of Nicolás Maduro and a handful of civilians and military, the imminent breakdown of the Bolivarian National Armed Forces (FANB) ), the explosion of the popular “barrios” in the face of the economic situation and direct sabotage.

The whole combination of factors was going to solve the Maduro question. Instead, what was anticipated happened: the impossibility of reaching the final objective.

That situation appears clearly when placed in the chronology of the four main events of this year. The first around January 23, date of self-proclamation of Guaidó accompanied by violent actions in the days before and after. The second on February 23 with the attempted entry by force of “humanitarian aid” via Colombia (and Brazil).

The third with the attack on the electrical system in early March that pushed the country to a borderline situation. The fourth was the military maneuver of April 30 that was unsuccessful and led to asylum requests at Embassies, arrests and laments. After that came the public recognition of the dialogues in Oslo and what usually appears in each scenario that takes the form of defeat: the exposed divisions.

Oslo is more than Oslo: it is one of the two scenarios that automatically divide the Venezuelan right. One is dialogue, the other is elections. In Norway, both issues are mixed in, the dialogue is, among other things, to agree on a possible resolution around an electoral option.

So the opposition enters into a degree of confrontation and crossfire, it is no longer contained under the umbrella that Guaidó repeats as a mantra: cessation of usurpation, transitional government, free elections.

US Secretary of State, Mike Pompeo, said it in an audio revealed on Wednesday: “Holding the (Venezuelan) opposition together proved to be diabolically difficult.”

From his words you can conclude: first, that those who have ordered the strategy have been the North American operators, such as Pompeo, John Bolton, Elliot Abrams and Marco Rubio; second, that what was achieved through unstable unity was thanks to them, and, thirdly, that a possible favorable resolution for the right-wingers depends on the US.

It is necessary to characterize the Venezuelan right, its narratives about a possible exit of Maduro and what would come later, within the hypothetical scenarios of victory that they build.

In the first place, there is a sector that has five nodal points: the exit of Maduro as a condition for any other step, the denial of all kinds of dialogue with Chavismo, any form of shared transition architecture – a phantom that is named recurrently-, to the participation of Chavismo in elections, and to its very existence once they would have occupied political power.

The last means to erase both the main political instrument that is the United Socialist Party of Venezuela (PSUV), as well as each person who has held office in Government. This narrative is hoisted by figures such as María Corina Machado, Antonio Ledezma, and communication operators from Miami such as Patricia Poleo.

Secondly, there are those who argue that the first step must be -corresponding to the previous narrative- the exit of Maduro, but then leave the possibilities open. Dialogue is possible and necessary to advance, there may be amnesties for senior military and public officials, and the existence of the PSUV as a party is recognized.

The one who expresses this idea clearly, without the pressure of other sectors of the right and of the same social base, is Elliott Abrams, who argued repeatedly that the non-negotiable is Maduro, and that the rest can be subject to agreement, recognizing the PSUV and its social impact.

That line is the one that Guaidó loads as a direct piece and without autonomy from the US, as well as sectors of the opposition that went to Norway, like the “Un Nuevo Tiempo” party.

Third, there is a sector that joins the public policy of Guaidó – having recognized him as president in charge against its will – without exposing itself to announcing what the resolution of the conflict could be, in a possible agreement.

Within this sector “Accion Democratica” figures, “Primero Justicia” figures, as well as minor parties of the right can be incorporated to the party. The tactic is to leave open doors to seize opportunities, or resort to the political metaphor of unsaddling until it clears up when the storm presses too hard.

The instability is permanent within each sector and each party, a table on which the right itself mounts operations to create fights, confuse, betray. As Pompeo said in that same audio: “The moment Maduro leaves, everyone will raise their hands and (say) ‘elect me, I’m the next president of Venezuela’, there would be more than forty people who believe they are the legitimate heir of Maduro.”

The Secretary of State placed that diagnosis on the right from the year 2017, when he himself was director of the CIA.

The Oslo talks divide even more and only the US can maintain a portion of unity. The first problem of the all-or-nothing strategy posed in the “cessation of usurpation, transitional government, free elections”, is that a negotiation underneath would be perceived as a claudication / betrayal by the social base of the right.

The second is that a resolution that includes elections with the presence of Maduro would be boycotted by the first sector. The result would be to stand for elections with little support from the social base and a partial participation of the opposition with crossfire. A picture similar to 2017, which resulted in the electoral defeat in the elections for governors and mayors.
The correlation of forces does not allow the US or the internal sectors willing to negotiate to demand the exit of Maduro. At the national level, Chavismo holds a position of greater strength; in the international senario there is a tie. The weak point for the government lies in the economy, where the blockade makes stabilization difficult.

What is Chavismo willing to give up? It already announced the probable overtaking of National Assembly elections. It demands a cessation of the blockade that the US does not seem willing to offer.

The game is locked and the passage of time puts in despair the right that leads the actions: it loses capacity and credibility. That position forces them to try strong actions to improve their strength when sitting at a table with the government and international mediators. For the moment they have stated that there is no agreement in Oslo and that their roadmap remains the same. In this context, President Maduro announced that the Security and Defense Council will be in permanent session.

What will the US try? How far are they willing to move forward to their goal? For how long in lieu of the next electoral scenario? Abrams wrote on Thursday that one of the possible forms of resolution is for Chavismo to undo the National Constituent Assembly – which already voted to remain in office until the end of 2020 – to join the AN, and from there to move forward in a transition without Maduro.
The special envoy for Venezuela aims to divide, open escape doors, maneuver to achieve his objectives. The right as a whole is outside those decisions: the decision makers are out of the country.