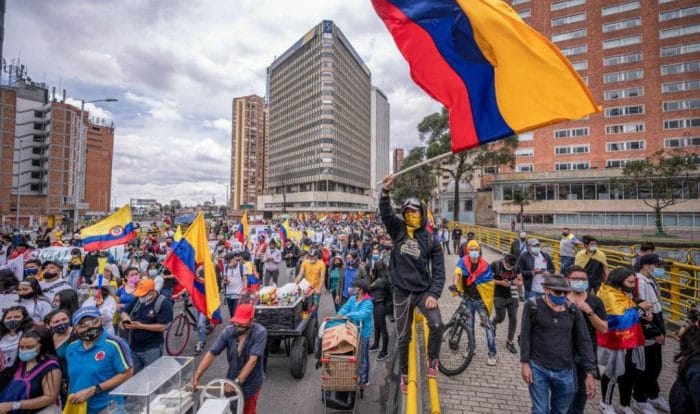 The protests in Colombia have continued for 23 days in the midst of brutal repression that has resulted in more than 50 demonstrators killed, according to the non-governmental organization INDEPAZ (Institute of Studies for Development and Peace), as of May 18, 2021. There were 46 cases of killings by police, in addition to six other cases that were in the process of verification, the latter in the city of Cali.  As of May 12th, according to a joint report by INDEPAZ and Temblores, there had also been 278 wounded, 32 eye injuries, 356 physical aggressions, 18 acts of sexual violence, and more than 1,000 arrests. At this time, 134 people have gone missing and have not yet been located.

The most visible case of sexual violence occurred in the city of Popayán on the night of Wednesday, May 12th. It was documented in a recording by local media filming the protest in that city. Alison Meléndez, a 17-year-old girl who was a by-stander near the demonstrations, was recording what was happening and was violently detained by four police officers. She was taken to the prosecutor’s office where she was sexually abused.  She was later released and committed suicide at her grandmother’s house. This is one of the 18 cases of sexual aggression against women by members of the National Police in the context of the protests that have been shaking the country since April 28th. The generalized repudiation in the country and the recordings widely published by the social networks forced the police, which initially denied the facts—calling them fake news—to finally admit to the violent detention of the young girl, who was also the daughter of a police officer. The events ended with the burning of the facilities of the Detention Unit where the sexual abuse of the minor allegedly took place.

The magnitude of the repression is disproportionate and corresponds, in my opinion, to a deliberate strategy of the government and the security forces to try to contain and suffocate the demonstrations. The aim is to provoke fear and reduce popular protest by force. Infiltrating the demonstrations and showing the unfettered action of paramilitary groups in the city of Cali and in the neighboring city of Yumbo, proof of this strategy has been widely documented by citizens who have recorded both the excesses of the public forces and the presence of armed civilians. Together with the police, civilians shoot at unarmed demonstrators. This occurred on Sunday, May 9, in the city of Cali against the Indigenous Minga, resulting in the wounding of 12 indigenous people. To date, and despite the recordings showing these events, the Attorney General’s Office has not offered any results of the investigations it says were undertaken. They wanted to reduce the protests with violence. And despite the dreadful toll in deaths, injuries, arrests and violence, the protest continues. In the face of national and international pressure, President Duque has reluctantly, and without showing remorse, acknowledged the excesses of the security forces. The truth is that there has been no condemnation and no results of the investigations have been released. The government continues to use repression to try to weaken the protest movement, but has not succeeded. So far, this strategy has failed, but that does not mean that the Uribe-Duque government has given up on it.

The government has refused to authorize the request of the Inter-American Commission on Human Rights, IACHR, which wants to go to Colombia to investigate what has happened and what is still happening. Nor has it issued a statement in favor of the formation of a Truth Commission that, with the presence of international delegates, would investigate the events that occurred in Colombia and the way the State responded to the protests. These proposals are part of the document that the National Strike Committee delivered to the government last Sunday, May 16. There has been no concrete response from the government except for the presidential speeches which have neither acknowledged the proposals nor taken responsibility for the excessive use of force against demonstrators.

The other strategy is to criminalize and prosecute social leaders who have been active in calling for the strike and the ongoing demonstrations. In this strategy, the most notorious event was propitiated by the Minister of Defense himself, Diego Molano. On May 15, at the end of a security council meeting in the city of Popayán, Molano accused four recognized social leaders of being the instigators of the attack and subsequent burning of the URI and the headquarters of Legal Medicine in that city. Molano’s outburst was so ridiculous that the Governor of the Department Elías Larrahondo Carabalí and the Mayor of the city of Popayán, Juan Carlos López, came out to deny what the minister had said, pointing out that this issue had not been considered in the security council and that the Molano’s accusations were made against four well-known social leaders in the city. They further said that the four social leaders had nothing to do with the vandalism against the official facilities. This is another problematic strategy that puts the life and honor of protest leaders at risk. For this fact, and for the murders registered during the protests, as well as for the repression and violence against the demonstrators, Molano will have to face a motion of censure next Tuesday, May 25th. We will see what happens, but so far the motion of censure does not seem to have the necessary votes to remove him from office. However, the pressure that the mobilizations exert on Congress comes back into play.

While continuing with this strategy to weaken the movement, the government is moving in two other directions. One of them is to broaden the political support base with new partners. The first objective is to add the Liberal Party led by former President Cesar Gaviria. Two long conversations took place between Duque and Gaviria last week with a bittersweet outcome for Duque. Gaviria, one of the mentors and promoters of the neoliberal model—the real cause of the social crisis and poverty, aggravated by the current pandemic—publicly stated that he supported Duque. He advised Duque that he should get rid of several ministers. First, dump the Minister of Defense, Diego Molano. Gaviria told Duque he could support his new tax reform project, as long as the new resources did not affect the middle class and the popular sectors. But still, he has not managed to integrate liberalism to the government. And the fact is that Gaviria has serious differences with a sector of his party in Congress, which does not agree with backing an unpopular government such as Duque’s with an electoral campaign for Congress next March. Even with these limitations, this position gives Duque an air of support, although nebulous.

The situation is very volatile in the political arena. This is mainly due to the proximity of the presidential and congressional elections. Proof of this are two new defeats that the mobilizations and protests have achieved. The first one is the exit through the back door of the opaque and erratic Foreign Minister Claudia Blum, who presented her resignation letter after making a number of mistakes. Nothing new is expected in terms of international relations with the appointment of the loquacious Vice President Martha Lucia Ramirez. The other more significant defeat was the axing of the health reform bill which sought to deepen the privatization of the health system. After resisting in the Congress, both in the House and in the Senate by large majorities, the bill was defeated on Wednesday, May 19. This was another victory for the street protests that had called on the government to withdraw it.

Attrition, exhaustion and future of the movement
The intensification of repression does not seem to be the government’s primary strategy, although the person who is really pulling Duque’s strings—former President Alfaro Uribe—continues to insist on it. That strategy would escalate internal divisions and does not seem to me to have enough acceptance today in the government and its partners in the business associations. Neither does the possibility of a coup d’état. There are powerful adverse factors in this situation. The pressure from the international community is strong and above all the pressure from an important parliamentary block of US Democrats. So are the critical positions of the European Union, the United Nations and some governments of the region. They point to the repression and tie it to the amount of military assistance being given to the government. And little would be added to this strategy by the declaration, at least in the short term, of internal divisions.

The collaboration of the control agencies also allows the government to use repressive mechanisms without major consequences, given that the prosecutor is a government official, as well as the Comptroller General, the Attorney General and the Ombudsman. The Justice Department, with the communiqué issued by the high courts, is also under the control of the government, although somewhat limited; it is the only institutional counterweight that has worked so far. In addition, there is a non-existent Congress, since it functions “virtually” with many limitations. The government continues to have narrow majorities in the Congress, but majorities nonetheless. Duque and Uribe are now seeking to keep their closest partners satisfied with quotas and resources to avoid weakening their alliance, which explains the change of ministers and Duque’s hopes to bring the Liberals into the government coalition. So, on the institutional front, the regime is in control. Therefore, I see neither internal divisions in the short term nor a coup d’état.

The popular protest movement will now have to face its own fatigue as a result of long weeks of mobilization. Lots of people turned out for the demonstrations yesterday, Wednesday, May 19—which was big but smaller than those of other days called by the National Strike Committee. The sit-ins and blockades remain in effect, but have been lifted at some points due to the demands of communities facing food shortages and the decrease in commerce and street sales where a very important part of the population obtains its means of survival. Perhaps it is time to temporarily rethink the mobilization strategy. Give way to staggered mass mobilizations that maintain the pressure while awaiting the outcome of the negotiations. At the same time, broad processes of deliberation could be opened on the contents of the proposals for tax reform, basic income, massive public employment plan, policies for rural/farm economies, public policies for youth, zero enrollment for higher education, reform of the security forces, political reforms, which are, in my opinion, the central issues of the protests at this juncture. Perhaps it is time for the collective construction of public policy proposals on these and other priority issues. Preserve and expand organization and deliberation accompanied by large peaceful mobilizations. These issues should be debated in the movement and, of course, in the National Strike Committee.