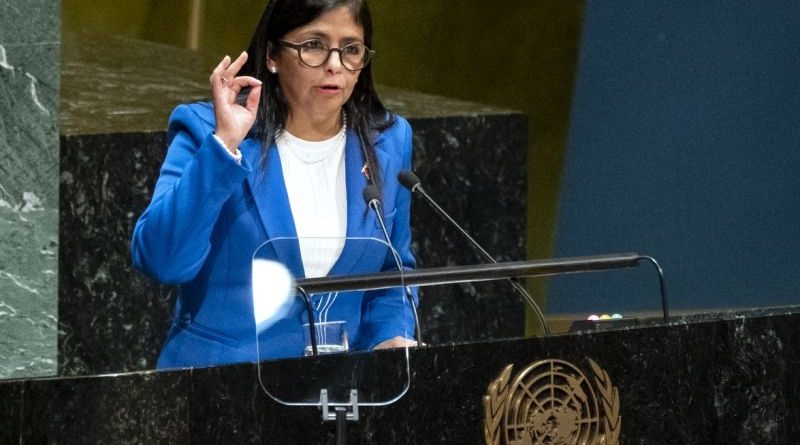 As Rodriguez said, Venezuela is “dignified and indivisible.” We believe that what distinguishes the real Venezuela from its imaginary illusion created by the US are precisely those qualities in addition to being truthful.

By Nino Pagliccia
All those wondering who is in charge in Venezuela, should stop reading the biased and confusing corporate media and should look at who represents the country at the United Nations. The UN is not a perfect institution but it is one that is clear on the issue of membership despite powerful attempts at obfuscating that clarity.

Much media effort has been put in creating the illusion that the legitimate Venezuela is the one “ruled” by a self-appointed (read, unelected) interim (read, for an undefined term) president that presides with no army, no cabinet, no judicial and no recognized congress. His name is hardly recognized in Venezuela were it not for the unrelenting promotion by his major supporter, the United States government.

As we are still grappling with an old geopolitical world model that has left us with divided regions and countries, North vs. South, East vs. West, and Western vs. the rest, now we can add a new type of division, Real vs. Virtual. The “virtual” illusionary Venezuela defined above has no territory that controls, and its supporters have a programmatic agenda that is only based on negating, ignoring and disregarding the reality that surrounds them in the hope that it will go away.

At the UN General Assembly last September there was no ambiguity. The legitimate government of President Nicolas Maduro of the Bolivarian Republic of Venezuela was represented by its Vice President Delcy Rodriguez despite a reported attempt to prevent her from addressing the 74th UNGA. Foreign Minister Jorge Arreaza, Vice Foreign Minister Carlos Ron, and Venezuela’s Ambassador to the UN Samuel Moncada were also part of the Venezuelan delegation.

An undetermined group of delegates walked out of the hall as Rodriguez approached the podium to give her speech. The simultaneous action showed a deliberate intent and possibly prior agreement. More importantly, to a keen observer it showed contempt not against the speaker, as suggested, but against the ideal of an institution that is supposed to be a forum for voicing official positions, disagreements, reclamations and ideologies for the whole world to hear, consider and build upon.

Those delegates were free to walk out and we know that eventually they will end up reading Rodriguez’s speech. However, in the context of the United Nations this was more a statement that they did not accept the spirit of the UN Charter and opted to temporarily exclude themselves from that institution. In doing so, they negated, ignored and disregarded the reality and legitimacy of the United Nations. They superimposed their attitude towards Venezuela on the institution of the UN.

In contrast, Delcy Rodriguez made reference to the UN as the “sacred enclosure for public international law”, and recognized the UN as the space for direct communication without the mediation of compromised media. During her speech she invoked several times the UN Charter by affirming that the unilateral coercive measures (sanctions) imposed by the US on several nations are against the UN Charter. They are indeed. Only “between 2015 and 2019 the US government has imposed more than 350 unilateral coercive measures against Venezuela” including individuals and institutions.

Delcy Rodriguez is a powerful communicator. She has been instrumental in defending Venezuela as the country’s representative at the OAS against the repeated attempts of the organization’s Secretary General to condemn Venezuela for violating the Democratic Charter. Her solid and convincing arguments prevented a majority vote against Venezuela albeit unwittingly forced the creation of the “Lima Group” as a splinter group of that body.

Eventually, Venezuela decided to withdraw from the OAS but the government has consistently defended and abided to the charters of all the international bodies it belongs to. It has become a trademark of the Venezuelan delegates to flag the organization’s Charter whenever they refer to it. In fact, Rodriguez, flagging the UN Charter booklet in her right hand, made her final point, “Venezuela asks for an investigation over all the infamous violations of the UN Charter by the United States.”

In her speech, Rodriguez effectively addressed the US financial system as the root cause of induced economic crisis in the world: “There is a new kind of terror or state terrorism imposed on people that does not use bombs but banks and financial institutions that can simply reach for a key on the keyboard in our digital era.” “It is the [US] Treasury Department the Economic Pentagon that militarizes the international relations…to impose regime changes”. She added that between 2015 and 2018 Venezuela has lost $130 billion that could have been used to satisfy the needs of the population through the “Bolivarian socialist model.”

The Venezuelan Vice President addressed credibly all major issues that affect the Bolivarian socialist model, but perhaps she achieved the greatest score in credibility when she convincingly refuted the accusations of Colombian President Ivan Duque that Nicolas Maduro was directly responsible for his “support for criminal and narcoterrorist groups operating in Venezuela to attack Colombia.” To make his point Duque produced photo “evidence” during his speech at the UNGA. The photos were immediately proven to be taken in Colombia instead. The abrupt dismissal of the Colombian intelligence chief who provided the photos fully confirms one of a long history of lies to discredit the Maduro government.

As Rodriguez said, Venezuela is “dignified and indivisible.” We believe that what distinguishes the real Venezuela from its imaginary illusion created by the US are precisely those qualities in addition to being truthful.