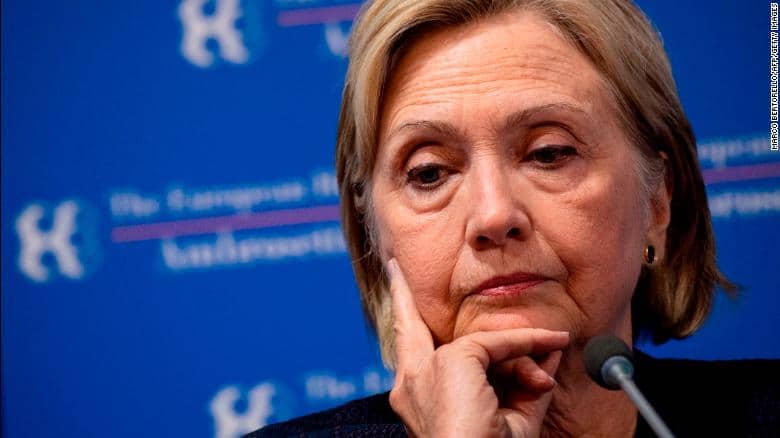 It’s not clear if smear-mongering Clinton is running for president, or just fleeing reality.

When Bill Clinton campaigned for the presidency in 1992, he spoke of his partnership with his wife thusly, “You’ll get two for the price of one.” He certainly was not joking. When he left office, he and other Democrats in New York engineered a Senate seat for Hillary Clinton before she even moved to the state. But the Senate was never her goal, it was merely a stepping stone to what she hoped would be her own presidency.

She thought the 2008 nomination was hers, until Barack Obama unexpectedly defeated her. Their contest was close enough that she negotiated the position of secretary of state in exchange for dropping out of the race that she came so close to winning.

After Obama was elected and re-elected, she of course ran again in 2016. In that year it was Bernie Sanders who exposed her personal and political weaknesses. She emerged victorious as the nominee but under a cloud of questionable behavior and the revelation that she and the Democratic National Committee rigged the race against her rival.

She spent 2016 encouraging media coverage of Donald Trump, who she felt was least able to beat her. She didn’t change that opinion even after he easily dispatched other Republicans when even he didn’t think he would win. Tone deaf and clueless, she mistakenly believed that white voters would be impressed with a parade of generals and surveillance state operatives who endorsed her. Their affinity for the open racist who dispensed with code words and dog whistles went unnoticed.

Hillary Clinton raised more than $1 billion but didn’t bother to do the all-important work of fielding a get out the vote effort, the lowest hanging fruit of a presidential campaign. That task is especially important for Democrats. Black peoples’ votes are suppressed or stolen outright and Democrats must always increase their margin of victory. On election day, she won the popular vote but lost in the electoral college, one of the worst debacles in American political history.

Still she wouldn’t go away. Instead she blamed Bernie Sanders for her defeat and even wrote a book to discredit him and prevent him from winning what she had thrown away with her hubris and scheming. She couldn’t accept that she lost and returned periodically to throw brickbats at Sanders or anyone else who might usurp the place she thought she deserved.

At every opportunity she said that she would not run again. But in the last few weeks that claim has been called into question. She recently said of Trump, “Obviously I can beat him again.”

That little hint has become more real in recent days as Joe Biden’s campaign has faltered. Biden’s lack of intellect and inability to form coherent sentences have brought him from most favored by big money Democrats to public laughing stock. Of course, these same funders want to see another neoliberal, Democrat in name only get into the race. Enter Hillary Clinton.

In typical fashion she orchestrated a hit job on Congresswoman Tulsi Gabbard. First came the New York Times smear job. Then her minions like Samantha Power posted twitter messages blaming third party candidates for the Clinton screw up. At last Hillary Clinton entered the fray herself, rehashed blame of the Green Party and mentioned that one Democratic candidate was a Russian asset who might make a third party run.

It isn’t clear if she will throw her hat into the ring again or if she is targeting Gabbard because her positions call into question the war against Syria that Clinton and Power so eagerly stoked. Gabbard endorsed Sanders in 2016 and briefly threatened not to attend the latest debate because of media bias and arbitrary DNC rules which determine who can and cannot participate.

It isn’t clear if Hillary Clinton has just lost it and can’t control herself, really thinks she can make a third presidential run, or is trying to keep the unraveling narrative of her defeat together. Like all establishment Democrats, she has Bernie Sanders in her crosshairs and will do anything to keep him from getting the nomination.

Whatever her ultimate goal, her reappearance spells disaster for the Democratic Party. It is proof that their plot to upend Sanders will only end in defeat and another Trump term in office. His stupidity has given them the gift of the Ukraine scandal. But as in the now dead Russiagate effort they overstate their case and err in believing that there is an impeachable offense. Overrated Russiagater Congressman Adam Schiff is once again leading the comical effort, and holding secret hearings which will make Trump look like the injured party.

Trump has done nothing in Ukraine, Syria or anywhere else that Obama, Clinton and Power didn’t do first. The game is up and desperation is in the air, hence the return of Hillary Clinton. The silver lining of this bad drama is that the Democratic Party’s self-immolation is just what the country needs. If the people aren’t fooled by Hillary’s machinations they can begin the all-important work of creating a new system that will make the Clintons and Trump irrelevant.