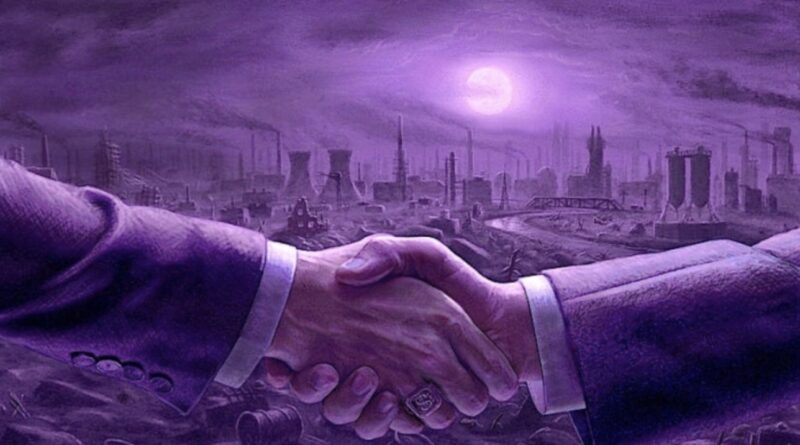 The breakdown of civilization is not inevitable. Socialist China has shown this throughout the pandemic, when it’s reduced poverty at the same time that around 100 million people throughout the capitalist world have so far been pushed into extreme poverty as a consequence of the capitalist world’s response to the virus. By 2030, which is when the UN estimates 130 million people will have become extremely poor due to global warming, this trend will be more than twice as pronounced. By 2040, which is when the Pentagon has roughly estimated there will be a power grid collapse within the United States, it will have gotten so big that the darkest expectations of climate futurists will be fulfilled.

These expectations are summarized by Professor Jem Bendell in his 2018 paper Deep Adaptation: A Map for Navigating Climate Tragedy. After laying out a vision of the coming decades that’s caused many people to become doomsday preppers upon reading his paper, Bendell warns that:

When we contemplate this possibility of ‘societal collapse’, it can seem abstract. The previous paragraphs may seem, subconsciously at least, to be describing a situation to feel sorry about as we witness scenes on TV or online. But when I say starvation, destruction, migration, disease and war, I mean in your own life. With the power down, soon you wouldn’t have water coming out of your tap. You will depend on your neighbours for food and some warmth. You will become malnourished. You won’t know whether to stay or go. You will fear being violently killed before starving to death.

Here’s the important caveat behind this passage: while it doesn’t contain any factually incorrect information in isolation, the paper’s research is seriously flawed. Bendell succumbs to the pitfall of reacting to the reality of climate catastrophe, then accepting exaggerated claims about this catastrophe as true. As several researchers from Open Democracy found last year, “Deep Adaptation consistently cherry-picks data, cites false experts, puts forward logical fallacies, and disregards robust scientific consensus.” It does this by estimating the date of the first ice-free Arctic summer as far closer than research has actually shown will be the case, by claiming this event will cause far more warming than it actually will, and by claiming that non-anthropogenic methane emissions from the Arctic will become the dominant factor in greenhouse gas emissions—to name a few examples.

Yet even though Bendell’s description of the near future was based on faulty science, the nature of the capitalist empire we live under may well make his nightmare vision come true regardless. The U.S. empire is such a destabilizing force that it has the ability to turn a problem which otherwise could be mitigated fairly easily into an unprecedented catastrophe. The unsurpassed number of COVID-19 deaths that the U.S. has had, in contrast to the relatively miniscule pandemic deaths within China and the other socialist countries, has proven this. When the climate crisis reaches its 2030s form, our socioeconomic system will produce hardships many times greater.

To understand how to respond to this crisis, says Open Democracy’s repudiation of Bendell, we need to understand the settler-colonial context within which the crisis is unfolding:

Deep Adaptation’s vague framing of “collapse” ignores important aspects of severe societal disruption. It’s not a binary; there can be varying degrees of collapse, and different kinds of collapse. At every step, it always makes sense to keep fighting, both to prevent further damages and to recover from past ones. There is no better demonstration of a persistent fight than the ongoing resistance of indigenous peoples to colonialism and environmental destruction. Deep Adaptation takes a different kind of inspiration from Indigenous struggles: Bendell references the abilities of Native leaders to come up with new forms of hope as they were confined to reservations — what Deep Adaptation calls “their new lifestyle.” There are myriad problems in this framing of the attempted destruction of Indigenous societies: most prominently, it ignores the genocidal intent of the US government, the willful and violent land grabs of settlers, and the resulting rampant despair in Indigenous communities. We would do far better to look for guidance on the climate crisis from indigenous resistance to colonial rule and extraction than in strategies for passive resistance. Indigenous communities have been fighting the climate and ecological fight for generations; it’s past time that settler communities step up and join that fight.

The climate crisis wouldn’t be happening if not for settler-colonialism. Because the Americas were colonized, the U.S. empire was able to be created. Because the U.S. empire was created, there’s now the U.S. military — the largest institutional petroleum user. It’s for this reason that the journalist Abby Martin has called the U.S. military “Earth’s Greatest Enemy,” with it being just one facet of the environmental destruction that Euro-American imperialism is creating. If not for the U.S. empire’s perpetual operations to protect corporate interests by sabotaging global proletarian movements, we wouldn’t be in a situation where 100 companies are collectively responsible for around two-thirds of greenhouse gas emissions. The green new deal that China has been carrying out would be able to occur on a planetary scale, since socialism would be allowed to develop worldwide.

On a deeper level, capitalism—the system that’s driving the planet’s destruction—wouldn’t even exist if not for settler-colonialism, since capitalism developed in the midst of the first decades of colonial genocide. Decolonial researcher Gerald Horne titled his book on early colonialism The Dawning of the Apocalypse for a reason: the murderous theft of Native lands and the enslavement of Africans created the conditions we’re in now, where settlers have become afraid of experiencing the kinds of horrors that colonized peoples have been living in since the empire’s beginning.

The fears of starvation, displacement, and war articulated in Deep Adaptation are anxiety about the apocalyptic consequences of colonialism finally reaching those most privileged within the imperialist order. Given the visceral and morbid nature of this anxiety, it’s no wonder why Bendell and the researchers he cites have been inclined to think this climatic blowback is going to be even bigger than it actually will be. This blowback has been building up to hit them since Columbus started the colonial genocide in 1492.

This information can help us by compelling us to embrace the only set of goals capable of saving us from climate collapse: the abolition of the United States, Canada, and the other settler-colonial states; the overthrow of all capitalist states so that socialist workers states can be built within the liberated indigenous First Nations; and the payment of reparations to the indigenous and African nations, along with all the global nations U.S. imperialism has pillaged and slaughtered. Without this agenda of revolutionary solidarity with all nations which have been targeted by the U.S. empire, no one will be saved but the super-rich, who’ve built luxury doomsday shelters to escape the climate collapse. They plan to leave us all behind.

RELATED CONTENT: With Earth on Edge, Climate Crisis Must be Treated Like Outbreak of a World War

The U.S. military is preparing to try to make this vision of only the wealthy escaping climate chaos a reality. Throughout the last decade, Pentagon documents and internal training videos have been claiming it’s “inevitable” and “unavoidable” that in the near future, the U.S. will undergo catastrophes like new climate-created pandemics, massive unemployment, expanded slum conditions, and breakdowns of much of the country’s electrical grid.

The military only finds this notable because it anticipates that such conditions will intensify class conflict, prompting the invasion and occupation of numerous U.S. urban areas and an overall increase in domestic militarization. This militarization is already occurring in the forms of private mercenaries that have lately been assaulting peaceful Minneapolis Black Lives Matter protesters, the deployment of troops to the Mexican border to help enforce ICE’s concentration camp system for indigenous climate refugees, the acceleration of Army equipment aid to police departments, and the sending in of the National Guard and police-aligned paramilitaries during the Black Lives Matter protests. The recent police brutality against Minnesota Indigenous anti-pipeline protesters is also part of this drive towards importing U.S. imperialism’s global counterinsurgency tactics.

As the African and Indigenous nations bear the brunt of this preemptive class war, along with the worst impacts of the pandemic and the new Great Depression, such conditions of violence, scarcity, poverty, and disease are being steadily expanded. The purpose of neoliberalism is to engineer a societal collapse so that ever-greater amounts of colonial wealth get siphoned up to the bourgeoisie, a measure made in reaction to capital’s contraction throughout the last half-century and the decline of U.S. imperial hegemony. To preserve their position amid climate collapse, the bourgeoisie need this dynamic to be intensified, need even more austerity, privatization, regressive taxation, and wage cuts.

To varying extents—with the Global South being the most impacted—these policies and their militaristic fortifying measures are being increasingly applied to the entire capitalist world. They’ll leave all of these places, including the core of the empire the United States, less equipped than ever to handle the climate’s deterioration. If we don’t win the class war, we’ll all be faced with their logical conclusion: a breakdown of social stability and a drastic shrinking of the planet’s habitable land. It’s socialism or barbarism.