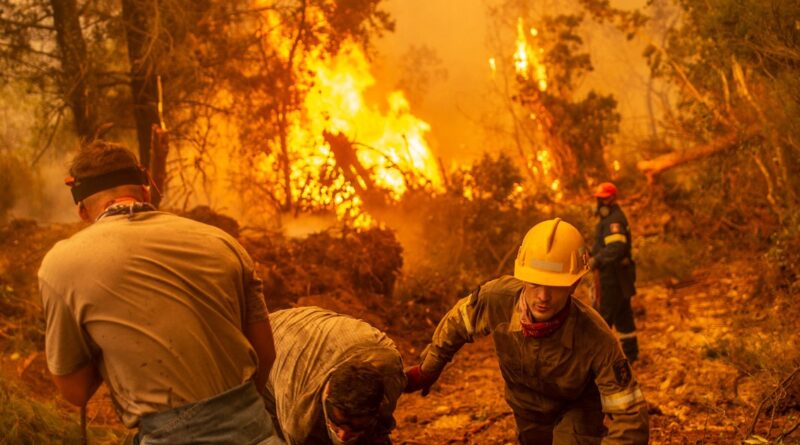 Humanity and the environment are under massive assault by global warming caused by human activities.

The new Intergovernmental Panel on Climate Change (IPCC) report released today, August 9, 2021—the first of four that make up the IPCC’s Sixth Assessment report—reiterates in scientific language (it deals with the physical science basis of global warming) what we have already known for quite some time from scores of previous studies: humanity faces a climate emergency, global warming is human driven, major climate changes are irreversible, and time is running out to avoid a catastrophe of unimaginable proportions.

It is, nonetheless, an extremely valuable report because a damning indictment of humanity’s wholly destructive actions towards all life on Earth now carries the stamp of approval of the world’s most authoritative voice on climate science. And, ironically enough, the new IPCC’s 6th Assessment climate report is also approved by the very same entities—195 member governments—largely responsible, although surely not all to the same extent, for the looming global climate catastrophe.

United Nations Secretary-General António Guterres described the report as “a code red for humanity.” U.S Special Presidential Envoy for Climate, John Kerry said the report made clear the “overwhelming urgency of this moment.” And U.K. Prime Minister Boris Johnson said the report is “sobering reading” and should serve as a “wake-up call” for global leaders ahead of the COP26 summit, which will be held in Glasgow from 31 October-12 November 2021.

The planet is expected to warm by at least 1.5 degrees Celsius by 2040, according to the IPCC’s latest findings. But the report also underscores the key point that, without “immediate, rapid and large-scale reductions in greenhouse gas emissions,” even limiting warming to even 2 degrees “will be beyond reach.”

The IPCC’s latest report points to temperatures rising faster than previously thought. In fact, on current trends the world is moving fast towards 3 degrees Celsius.

Yet, the scientists behind the writing of the latest IPCC report say that the worse can be avoided if the world acts fast. In other words, rescuing the planet comes down to politics—and economics. And to human nature, one might add.

There is no doubt that the task ahead is exceedingly difficult, to say the least. A global existential crisis must be addressed in a world occupied by primarily egoistic and highly imperfect creatures; where the nation-state remains the primary political unit; and with an economic system in place that is destructive and unsustainable. Nonetheless, the odds can be overcome because it’s either survival or extinction. Reason must prevail, international cooperation needs to replace national antagonisms, and sustainability take priority over short-term profits.

All of the above are realizable goals through a political decision to move away from the fossil fuel economy and, in turn, to implement a green new deal on a global scale.

World War II was won through economic breakthroughs, technological cooperation, and the formation of a primary alliance against the Axis powers.

The climate crisis must be treated like a world war—World War III. Humanity and the environment are under massive assault by global warming caused by human activities. The biggest polluters on the planet—US, China, India, Russia, Japan, Germany—must form an alliance to lead the global economy away from fossil fuels as quickly as possible. The rich countries, which are responsible for the climate crisis, also have a responsibility to finance the bulk of the transition to a global green economy. Moreover, various studies have shown that financing the Global Green New Deal is not a particularly challenging task. UMass-Amherst economist Robert Pollin, for example, has argued that there are several large-scale funding sources for the greening of the global economy, and they include things such as carbon tax, the transfer of funds out of military budgets, lending programs introduced by Central Banks, and the elimination of all fossil fuel subsidies. He has also estimated, a figure corroborated by other similar studies, that the cost of the clean energy transformation would require an average spending of about $4.5 trillion per year between 2024 and 2050, which is when most countries have committed to reaching zero emissions.

In sum, all is not yet lost, which is also the conclusion of the ICPP’s latest report. Of course, whether we can overcome the institutional, structural, and even intrinsic obstacles to designing a long-term, truly sustainable world economy remains to be seen. But if we convince ourselves that combatting the climate crisis is equivalent to fighting a world war, we do have a realistic chance of rescuing planet Earth.

C.J. Polychroniou is a political economist/political scientist who has taught and worked in numerous universities and research centers in Europe and the United States. His latest books are Optimism Over Despair: Noam Chomsky On Capitalism, Empire, and Social Change and Climate Crisis and the Global Green New Deal: The Political Economy of Saving the Planet (with Noam Chomsky and Robert Pollin as primary authors).

Featured image: Firefighter and volunteers use a water hose near a burning blaze trying to extinguish a fire in the village of Glatsona on Evia (Euboea) island, on August 9, 2021. (Photo by Angelos Tzortzinis/AFP via Getty Images)