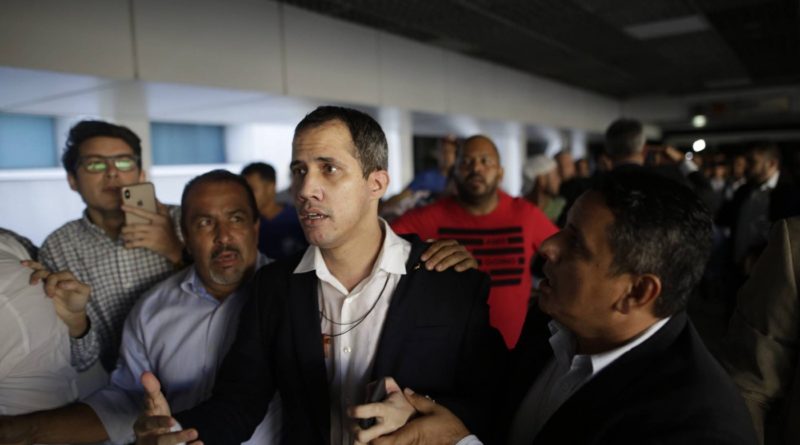 Pretending to be the acting president of the Venezuelan legislature, this Wednesday, April 15, Juan Guaidó has once again led a looting maneuver against Venezuelan money just when the country is most in need of resources due to the Covid-19 pandemic and to the multifaceted financial pressures that Washington exerts against Caracas.

The annulment of Parliament

Through a videoconference, Guaidó led a kind of informal meeting of deputies from opposition political parties to “decide” (outside their competences) on a set of issues related to Venezuelan finances that are beyond their powers. In principle, Guaidó does not institutionally dominate the Parliament, but once he proclaim himself president of the country in a public square, with the support of Washington, the border between fiction and reality disappears.

The actions taken since 2019 by the National Assembly have been aimed at endowing the supposed “interim government” of Guaidó with a strange legal body, with a view to investing institutional legitimacy in the capture, theft and looting of oil assets and liquid resources of the country.

This has represented a blow to the Venezuelan state model, along with the balance of powers that the Constitution expresses. By US mandate, Guaidó is “president” of two public powers (the executive and the legislative) and the period of his virtual “government” has a time limit until “the usurpation ends.” A legal delusion.

Although this invention has no handles in the legal and political reality of the country, the ideological production and organizational model of the “interim government” resembles that of a protectorate with a parliamentary fiction.

The idea carries with it an ideological burden very similar to the Platt Amendment that the United States imposed in the Cuban Constitution after the Spanish-American war, designed with the purpose of politically and economically “protecting” the Caribbean island.

That idea of semi-colonial tutelage and control has permeated not only the most exalted anti-Chavista discourse, it has also influenced the acts that they try to project as legal from a ghostly Skype videoconference that pretends to be a parliament.

As a result, the concept of popular sovereignty has been turned upside down: Guaidó’s “decisions” have legitimacy because the United States supports him, and not because they respond to what the voters decided at the ballot box in late 2015.

Washington believes that its war of regime change has resulted in the abolition of the Venezuelan Republic, which also includes the Parliament that Guaidó claims to govern.

In this delirium, the self-proclaimed would be an official similar to an imperial proconsul who invests the metropolis’ dominance over the economy, commerce and the authorities that lead the country with legality.

The Venezuelan ruling class has unlocked new levels of anti-Venezuelanism by making borders within the geopolitical project of the most disaffected and criminal world elite in history.

In pirate mode: transfer of wealth to the Federal Reserve

As this neocolonial expedition has run aground as a result of the resistance of the Venezuelan people, Washington has moved quickly to depending on what is at hand, while seeking to rearm the coup agenda in the midst of the Covid-19 health disaster and the vigorous rise of China that has changed the dominant position of the Empire in the international order.

And it is that urgency which marks the current times. In the “remote session” of opposition deputies led by Guaidó, the transfer of a balance in dollars from an account of the Central Bank of Venezuela (in the financial US institution: Citibank) to another account in the Federal Reserve of New York, was approved.

The decision that breaks all legal principles was rejected by the (BCV), the country’s leading financial institution. Through a statement, It asserted that this movement came from an “illegal order emanating from the US Treasury Secretariat (…) consummating a vulgar dispossession of financial resources belonging to the Venezuelan monetary authority through the misappropriation of assets whose sole owner is the Venezuelan State.”

The transfer is estimated to amount $342 million, according to the Telesur website. It is in doubt that the BCV has an account with the New York Federal Reserve, so the money has an opaque and corrupt whereabouts.

The illegal guardianship of the United States over Venezuelan money and the country’s public accounts in gringo territory has made these transfers of wealth possible, which are very little different from a pirate looting. And Guaidó’s legal simulation only makes it more evident and crude, since in reality he does not have control of the BCV to decide on the country’s resources.

The management of Venezuela’s oil, industrial and liquid assets that have been subject to dispossession is currently fraught with opacity and convincing doubts of corruption. In January last year, Trump’s then national security adviser, John Bolton, indicated that Venezuelan money captured by the Treasury Department would be deposited in a trust.

As of today, there is no information on that trust or a verifiable source to determine the status of the assets. They have tried to erase the evidence of the crime.

The dispossession of Venezuelan resources occurs in the midst of the country’s currency drought as it struggles to defeat the coronavirus. The abrupt drop in the oil market and the escalation of the sanctions war have led to increased inflation, the decrease in imports and remittances and the shortage of gasoline.

These looting maneuvers in the midst of a pandemic have damaged the image of Guaidó among the economic spokesmen of the opposition. The economist Francisco Rodríguez, who is running as the ideologist of Venezuela’s “economic transition” in a neoliberal approach, stated a couple of days ago that “Guaidó has accounts abroad for billions of dollars.”

Rodríguez argues that the deputy of Primero Justicia “Carlos Paparoni declared that there were 3 billion dollars. They themselves approved $ 80 million a month ago to finance their travels. Don’t tell me later that they don’t have money.”

The anti-Chavista economist who had a managerial position at Bank of America and who has constantly questioned the use of crippling sanctions against Venezuela, warns that the money is being spent for the payment of the debt in an untransparent way without prioritizing the situation in the country.

Money? For them of course there is …

Following the illegal transfer of Venezuelan money to the Federal Reserve, a wave of resources were approved under the so-called “Special Law of the Fund for the Liberation of Venezuela and Vital Risk”.

Faced with the pandemic and the serious social risks involved, Guaidó has chosen to accelerate the circulation of part of the stolen resources among the political mafia of the parties. Scraping the pot and quickly seems to be the underlying message, since the Venezuelan state is acting at the legal and international level to gain access to the accounts and blocked assets.

In total there are 80 million dollars that would allegedly be distributed as follows, according to the website Chronicle One :

The narrative used to describe the ends of these resources stripped from Venezuela seeks to confuse public opinion using humanitarian language but at the same time confusing in its core because it is vague. They are projected as good news or as a solution to the crisis, even when it reiterates the state of siege of the country’s economy.

However, mathematics does not lie and the anatomy of these priorities, even less.

The proposed “budget” represents a tiny fraction with respect to what Rodríguez affirms that Guaidó manages, and that it could even be more if we count the embargo (and the revenues) of Citgo, the assets of PDVSA spread throughout the continent, the seized gold in London and the international bank accounts blocked with the country’s liquid money.

But it is also a new attempt to launder the dispossession with a deceptive and extortionate offer, since that money belongs to the country and Guaidó is not a legitimate and legal authority to manage it at will.

There is nothing to be thankful for. Venezuela is fighting a pandemic and cannot use its resources because the United States has taken them from it in order to collapse the economy and politically prop up Guaidó.

According to the proposed scheme, the money will be distributed among the opposition deputies affiliated with Guaidó, the fake ambassadors who pretend to represent the country and the media and journalists who have been on the sentimental payroll of the State Department and the CIA for years.

The fake controller, who worked with foreign companies that disputed control of Citgo years ago, will also receive an envelope.

As if it were a gangster movie, Guaidó divides part of the looted money among his own to keep a fragile political loyalty in the short term, at least while the 80 million dollars last.

The effects of the scramble of a corrupt elite are costing the country the financial capabilities necessary to quickly overcome its complicated situation.