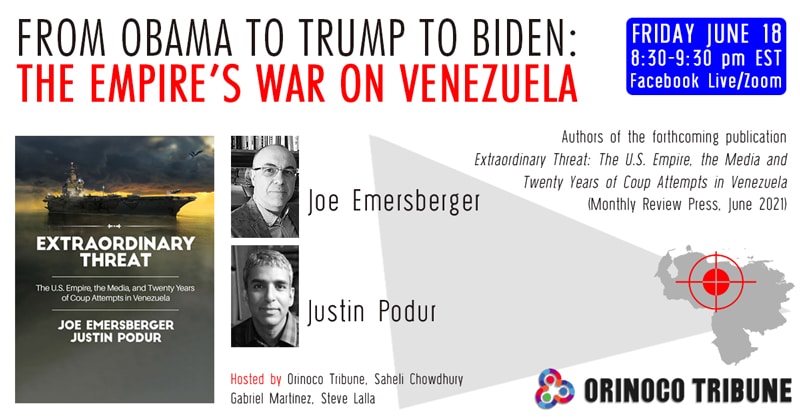 NOTE: This livestream is now complete and can be viewed on Youtube here or in the window below:

On Friday, June 18, Orinoco Tribune will host a live discussion with Joe Emersberger and Justin Podur, authors of the new publication Extraordinary Threat: The US Empire, the Media, and 20 Years of Coup Attempts in Venezuela, forthcoming from Monthly Review Press.

Emersberger is a writer with Ecuadorian roots based in Canada. An engineer by profession and member of Canada’s UNIFOR trade union, he has written for FAIR.org, Telesur English, ZNet, CounterPunch, and many more. Podur is a Toronto-based writer and the author of America’s Wars on Democracy in Rwanda and the DR Congo, and Haiti’s New Dictatorship in addition to three novels. He is Associate Professor with York University’s Faculty of Environmental and Urban Change and a fellow of the Independent Media Institute’s Globetrotter project. Podur has reported from India, Afghanistan, Palestine, Haiti, Democratic Republic of the Congo, Colombia, and Venezuela for TeleSUR, rabble.ca, Ricochet, and other outlets.

Together they have written a much-needed publication that examines and exposes the participation of mainstream media outlets and human rights organizations, purportedly neutral or even branded as progressive, in the hybrid war on Venezuela. The work concentrates on six coup attempts since the 2002 failed ouster of Hugo Chávez, in which the president was removed from office for less than 48 hours before his reinstatement by a civic-military uprising. The publication will be released on June 22, 2021.

“Nobody can follow closely every country the US wants to destabilize,” wrote the authors in a recent interview with Roberto Sirvent. “It’s not always easy to discern how big a kernel of truth there is, if any, to US allegations against a state it has singled out as an enemy. We hope people read our book and come away feeling more comfortable suspending judgment when they can’t look into such allegations closely, and if they… choose to look into them, to try very hard to find independent sources. Moreover, we hope they realize that the allegations, even if true, can rarely justify war or the kinds of economic sanctions the US has imposed on Venezuela, which are essentially criminal acts of war.”

Beyond their detailed analysis of six coup attempts since 2002 and the “manufactured consent” used to bolster support for them, Emersberger and Podur provide an overview of significant events in Venezuela dating back to 1989’s Caracazo tragedy. Particular attention is paid to the media warfare of US, UK and Venezuelan outlets, both private and state owned. The publication provides an integral study, not only of the media tactics and illegal “sanctions” that comprise the US campaign to strangle Venezuela, but also of the political and ideological deceptions behind the concept of democracy in industrialized capitalist societies.

NOTE: This livestream is now complete and can be viewed on Youtube here.

Special for Orinoco Tribune by Steve Lalla and Saheli Chowdhury