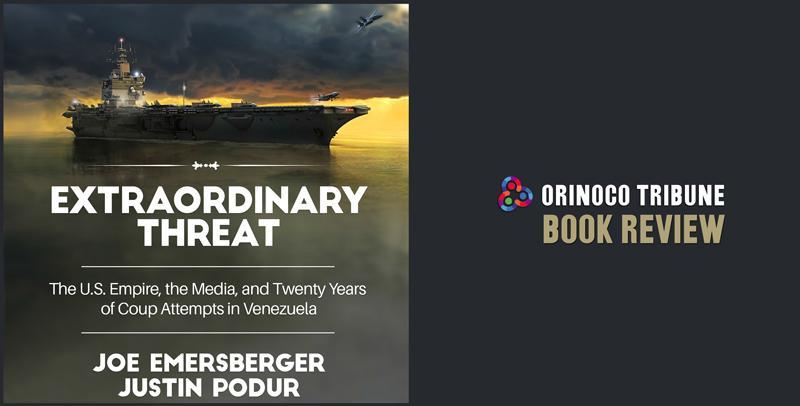 Since the election of Hugo Chávez in 1998, Venezuela has been subjected to a campaign of hybrid warfare at the hands of the US and its allies. In that span of time the Bolivarian Republic has weathered six coups attempts including the attempted assassination of its president, a mercenary invasion by former green berets, and an economic blockade that has killed over 100,000 of its citizens. A new book  by Joe Emersberger and Justin Podur, Extraordinary Threat: The US Empire, the Media, and Twenty Years of Coup Attempts in Venezuela, to be published this month by Monthly Review Press, sheds some light on these crimes.

Beyond their detailed analysis of each coup attempt since 2002 and the “manufactured consent” used by the media to justify them, Emersberger and Podur provide an overview of significant events in Venezuela dating back to 1989’s Caracazo tragedy. Particular attention is paid to the information war waged by US, UK and Venezuelan outlets, both private and state owned. The publication provides an integral study, not only of the media tactics and illegal “sanctions” that comprise the US campaign to strangle Venezuela, but also of the political and ideological deceptions behind the concept of democracy in industrialized capitalist societies. In this review, three Orinoco Tribune contributors weigh in with their impressions.

How media kills in the name of democracy
An important aspect of the Empire’s hybrid war against Venezuela is the media narrative that paints the country’s democratically elected government as a “dictatorship,” to manufacture public consent in the United States and among its allies for the murderous blockade on Venezuela and the ongoing regime-change operation. Emersberger and Podur, apart from detailing all the sanctions, threats, and coup attempts that Venezuela has lived and is living, describe how the media narrative in support of these is constructed through distortions, half-truths, outright falsehoods, lies of omission, and often through uncritical and unquestioning repetition of US government propaganda.

To explain how the trope of “Venezuela is a dictatorship” is sold to the public, the authors discuss the role of traditional media and human rights NGOs , especially those that present themselves as liberal or even left-leaning but actually serve the interests of the Empire. Outlets such as New York Times, NPR, The Guardian, Reuters, and rights groups like Human Rights Watch (HRW) and Amnesty International have all done their utmost to either normalize the brutal sanctions against Venezuela as a “non-lethal” alternative to military invasion to bring “democracy” to the country, or invisibilize them altogether. In the section “Extraordinary Deceit,” the authors discuss the case of Rory Carroll of The Guardian as a particular example of an apparently leftist source engaged in this task, who for years lived in Caracas and demonized Chávez and his administration through his hostile reporting, while never mentioning the social and economic achievements of the government, or the huge challenges that the Bolivarian Revolution faces. Carroll even resorted to applauding racist attacks against Chávez and Chavistas by the opposition, something that should have been incompatible with the progressive values that The Guardian claims to espouse.

On the rights front, HRW has continuously denounced both Chávez and Maduro for alleged human rights violations based on scant or no evidence, and branded Chávez’s internationalism and opposition to US aggression in countries around the world as “embracing abusive governments”; while Amnesty International has repeatedly refused to denounce the US-imposed sanctions for having caused food scarcity in Venezuela, and instead considers it the Maduro government’s responsibility to solve the crisis. The authors also expose the double standards of these groups and outlets that praised—or sometimes only faintly criticized—really brutal aggressive regimes like those of Saudi Arabia or Colombia. In addition, “members of the left” including progressive politicians of the US Democratic Party and UK Labour Party, have further contributed to the anti-Venezuela narrative by decrying “authoritarianism” in Venezuela, based on propagandistic reports of these influential human rights groups that they consider “trusted sources.” According to the authors, the demonization of Venezuela through distorted coverage and lies of omission and commission while Venezuela was making its most progress allowed the US government to escalate the hybrid war years later with almost no opposition.

The all-encompassing economic and financial blockade against Venezuela has already claimed over 100,000 lives in the Caribbean nation, through deprivation of items as basic as food and medicines, items that are taken for granted in the Western world that comprises the sanctioning countries. The authors warn that if these countries ever start a conventional war in the name of “humanitarian intervention” in Venezuela, public support for it will have already been manufactured through twenty years—and counting—of lies demonizing the targeted nation, a strategy that was already applied against Haiti, Iraq, Libya, and Syria, and is currently being employed against China, Russia, Nicaragua, and Iran.
-Saheli Chowdhury

Deconstructing myths
Besides its exhaustive analysis of the several coup attempts that have been carried out in Venezuela, and the role Western media has had in manufacturing consent and acquiescence in favor of a possible further escalation, Emersberger and Podur place an important emphasis in directly addressing the narratives and myths about Venezuela pushed by US interventionism.

Extraordinary Threat begins by dealing with the myth of a once prosperous oil-producing Venezuela turned poor by Chavismo and ends with another: that Venezuela would be better off now if only it had given in to the coup attempts—at least that would have taken the brutal sanctions off its back. This is another myth that must be debunked, for it underscores a looming danger.

Emersberger and Podur take the examples of Haiti and especially Venezuela’s neighbor Colombia to make the case, and point out that were Venezuela to yield to US intentions, it would go from a state of constant coups to one of permanent “low-intensity” civil war; to becoming a “US counterinsurgency laboratory” like Colombia, with its paramilitary and state violence against Black and Indigenous populations, its false positives, and drug-trafficking routes. Venezuela could also fall victim to extrajudicial violence like that exercised against supporters of Jean-Bertrand Aristide in Port-au-Prince’s poor neighborhoods after the 2004 coup in Haiti. The violence and repression continues in Haiti under the government of Jovenel Moïse, and in Colombia, evidenced by Duque’s violent response to the paro nacional.

Extraordinary Threat mentions an anecdote from the 2009 Summit of the Americas, where Hugo Chávez gave Barack Obama a copy of Eduardo Galeano’s Open Veins of Latin America. One would only need to look at the pages on Venezuela in Galeano’s book-long essay to realize that the myth of a prosperous oil-rich Venezuela was already that—a myth—in the ‘70s, and that the brand-new cars, air conditioning and foreign luxury goods contrasted starkly with the poverty in the hills surrounding Caracas, and the desolation in the oil wells of Lake Maracaibo. Like Galeano’s Open Veins, Extraordinary Threat does a meticulous job of demonstrating the fact that the imperial myths of the past and the present affect the reality and the future of Venezuela and Latin America.
-Gabriel Martínez Saldívar

A balanced perspective
In English-language media and publications, opinions about Venezuela—as of other countries that have been consistently targeted by disinformation campaigns—are deeply polarized. Ideology often takes the place of objectivity. For these reasons the authors’ strategy of dissecting media narratives and comparing them to facts on the ground, airing both sides of the story in most cases, is refreshing and much needed. Although the authors approach the subject as anti-imperialists, their incisive perceptions are not limited to a critique of Empire. The authors depart from dogmatism and don’t hesitate to detail the failures of Venezuela’s economy prior to the US “sanctions,” for example, and provide a balanced and often critical appraisal of the policies of Venezuela under its socialist leaders Hugo Chávez and Nicolás Maduro, especially in the economic sphere. In “Chapter 6: Second Coup Attempt: Oil Strike, December 2002-February 2003” Emersberger and Podur call into question the fixed exchange rate that in 2003 replaced the floating exchange rate imposed by Chávez a year earlier. The failures of Venezuela are contrasted with—perhaps unfairly—the economic success story of Evo Morales’ Bolivia.

The authors provide a welcome account of Maduro’s May 2017 decision to convoke a Constitutional Assembly, dismiss Attorney General Luisa Ortega Díaz, and thwart the fifth coup attempt. The tangled web of legal issues and political decisions, challenging to navigate via the countless news items and short articles devoted to this intrigue, are summarized and contextualized in detail. This diligently researched book is indispensable reading for those seeking to form a balanced picture of the national and international dynamics at play in this key battleground for US hegemony.
-Steve Lalla

Solidarity with Venezuela
Although the publication is not entirely a praise of the Bolivarian Revolution—the authors offer detailed critiques where criticism is deserved—overall the book stresses the importance for people of good conscience to defend the example of Venezuela. Through grassroots democracy and popular participation, Venezuela is trying to chart an independent course and overcome centuries of imperialist domination, a heroic resistance against the “extraordinary threat” of the most powerful empire of modern times.

On Friday, June 18, Orinoco Tribune will host a live discussion with Joe Emersberger and Justin Podur, authors of the new publication Extraordinary Threat: The US Empire, the Media, and 20 Years of Coup Attempts in Venezuela, forthcoming from Monthly Review Press (June 22, 2021).

Emersberger is a writer with Ecuadorian roots based in Canada. An engineer by profession and member of Canada’s UNIFOR trade union, he has written for FAIR, Telesur English, ZNet, CounterPunch, and many more. Podur is a Toronto-based writer and the author of America’s Wars on Democracy in Rwanda and the DR Congo, and Haiti’s New Dictatorship in addition to three novels. He is Associate Professor with York University’s Faculty of Environmental and Urban Change and a fellow of the Independent Media Institute’s Globetrotter project. Podur has reported from India, Afghanistan, Palestine, Haiti, Democratic Republic of the Congo, Colombia, and Venezuela for TeleSUR, rabble.ca, Ricochet, and other outlets.

Featured image: Book cover for the forthcoming publication Extraordinary Threat: The US Empire, the Media, and 20 Years of Coup Attempts in Venezuela, modified by Orinoco Tribune.