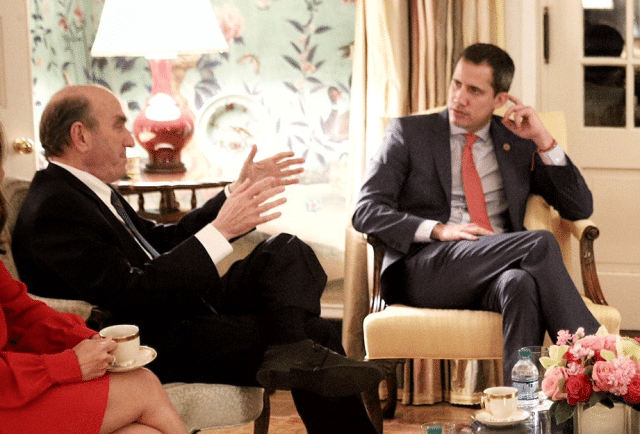 The far-right María Corina Machado, the fugitive from Venezuelan justice Antonio Ledezma and the “special envoy” for Venezuela of the Donald Trump regime, Elliott Abrams, are in a pitched battle over how they believe they should overthrow Venezuelan President Nicolás Maduro and end his government, elected in 2018 with more than 60% of the vote.

In that sense, both Ledezma and Machado have criticized the most recent position of Abrams, who seems to abandon the rhetoric of executing a foreign military invasion to remove Maduro; while they consider that this is the only way to end the Venezuelan government.

Ledezma says that the statements by Elliott Abrams, in which he said that María Corina Machado lives in “magical realism” for insisting on the military invasion against Venezuela to remove Maduro, also seem to be “surreal.”

Ledezma, who uses as resources to promote the military invasion of Venezuela, false arguments such as Maduro’s alleged links with “terrorist” and “drug trafficker” groups, and the “Cuban invasion”, with “Iranian missiles” and “Russian weapons” without having any proof to certify it, seems to be living the same “magical realism” that Abrams says Maria Corina lives.

On Monday night, the anti-Chavista Colombian media NTN24 published an interview with Abrams, where he stated that the application of a plan B (military invasion) to oust Maduro, called by him “Operation of Peace Stability,” is not a “healthy response to what Venezuelans want.”

“María Corina is free to say what she wants. She lives in magical realism and she’s calling for a plan B, I don’t think that’s a sensible answer to what people need. You have to start from the grassroots with the Venezuelans,” Abrams stressed.

For his part, Machado, who recently fought with Juan Guaidó, said that Guaidó has 120 days left of fictitious “presidency” and she added that he has not succeeded in overthrowing President Nicolás Maduro.

The ultra-rightist said, in response to Abrams, that “the duty” of the extremist opposition is to “convince” the administration of Donald Trump to execute “by force” the departure of the current Venezuelan government.

‘They will have to be convinced, that is our duty. There is a real threat to the hemisphere here and that has been said by the Southern Command and Vice President Mike Pence. The fantasy is to believe that the regime is going to leave through another mechanism that is not by force,” she said in an interview in CNN.

According to Machado, to remove Maduro – elected in the 2018 presidential elections with more than 60% of the votes – “we need to articulate the forces from within and without. There is no other way, they will not go out any other way,” and she added, in reference to Juan Guaidó, “that the Venezuelan opposition must be purged.”

“Here you cohabitate with tyranny or you confront it. But you cannot be in the middle, you have to speak clearly because we Venezuelans have already decided. We are willing to do our part, but we need leadership that in the end they will not give us,” she said.

According to Machado, within the various small groups of the opposition, “there have been actors who are infiltrators and have been surrounding Guaido and say they do not want action from the international community. There’s big money at stake. I told Guaidó that he has to cut those tentacles.”

In this sense, Abrams recalled that the instruction for the Venezuelan opposition is to remain united and thus continue with international pressure.

“The task is very hard. Many countries around the world have faced a situation similar to that of Venezuela. The advice I can give you is to try to keep the opposition united. Know that the world’s democracies will not hesitate to support you,” said a hopeless Abrams, with a speech that now seems distant from the “maximum pressure” plan that they launched a couple of weeks ago against Venezuela.

Abrams stressed that the United States and the Venezuelan opposition must continue to attack Venezuela through international coalitions. “What we have to do is listen to the Lima Group and the International Contact Group,” he said.