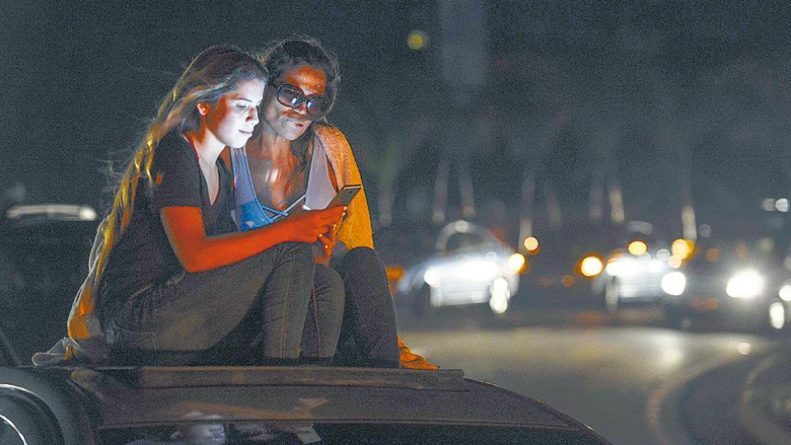 Between the hypothesis of sabotage and the national emergency.

Along with the blackout, truths emerge. The New York Times noted that the burning of trucks with aid was a Molotov bomb thrown from opposition ranks.

Caracas.- Ghost town, that’s how Caracas looked like on Saturday at midnight. The blackout was almost total, only some crowded luxury restaurants had lights, some service stations, pharmacies, hotels, and the few cars and motorcycles circulating. Silence and darkness, a cinematic setting. Again the blackout and a central element: the absence of pockets of violence, and a very small police presence at certain precise places.

In the wee hours of the morning the light returned to areas of the country and the city. In some places it had not resumed yesterday afternoon / evening, meaning that thousands of people remained in the dark for more than three days, from Thursday at 5:00 pm, the moment of the national blackout that brought the entire country into an unknown space-time dimension.

There is usually no awareness of everything that depends on electric power: communications, payments, (underground), land and air transport, health systems, day and night schedules, water, food reserves, the possibility of studying, working. A prolonged total blackout slows down until it almost stops a country, its companies, institutions, homes, everyday, approaching precipices as it continues, and that, it is known, generates reactions.

That is why the tranquility that was lived within the frame of these characteristics was key. The images of yesterday morning were the installation of fruit and vegetable markets, queues to load gasoline, get water, concerns for relatives, acts of solidarity, everyday life in times of siege.

It is not too random to guess that the objective of the blackout was to unleash an apocalyptic picture. “In the case of Venezuela, the idea of ​​a government like the United States intervening remotely against the power grid is quite realistic. Remote cyber operations rarely demand a significant presence in the field, turning them into ideal influence operations that are not recognized, “says an article published in Forbes magazine, wondering about the possibility of a cyber-attack to explain the blackout.

It adds: “The obsolescence of the internet and the country’s energy infrastructure present little challenges for this type of operations, and makes it relatively easy to erase all traces of foreign intervention (…) delegitimizing the current government in the same dimension in which the government in the shadow (US and Guaido’s) presents itself as a real alternative”.

The sabotage to the electric network in that magnitude can be framed in the sequence initiated since the beginning of the year, where some of the main events were: the non-recognition of Nicolás Maduro, the self-proclamation of Juan Guaidó, the meeting of the United Nations Security Council, February 23 as the key date for the entry of “humanitarian aid” and the impossibility of achieving that goal, new meetings of the United Nations, Guaidó’s return to the country and the blackout, (in that order).

After 23 a discursive displacement occurred: the withdrawal of the threat of military intervention by the United States, which could be due, among other things, to the negative impact it generates. The following act was the transfer to this blackout scenario, where the movement was deployed in two vertices: the fact as such, with all its consequences, and the interpretation, that is, the fight to determine responsibilities. At this point the centrality lies in the ability to convince.

One of the lessons that the last episodes have left, is the vulnerability of the truth before the immense capacity of positioning of ideas that the articulation between great agencies and governments has. The most emblematic case was the burning of trucks with humanitarian aid that the Venezuelan police supposely carried out on the 23rd. A recent article in the New York Times points out that, just as Página12 had said, it was actually a Molotov bomb thrown from the ranks of the right wing, and that there is no proof that there were medicines in the trucks. However, the fact was repeated as true by the media, the US Vice President Mike Pence, and the person in charge of the Venezuela case, Elliot Abramos, before the United Nations, among others.

The dispute for the conviction gains even more strength in the case of the blackout, due to the difficulty to prove it, the little trace of the attack, the ways in which the hits were deployed -as President Maduro pointed out- in a computer, electromagnetic, and physical manner,  and with internal complicities.

In addition, the instability of the electricity system has been recurrent in some areas of the country, such as Zulia state (for years). That, together with allegations of lack of investment in the electricity system, the daily repeated matrix that this government is exclusively a space of corruption, added to media deadlines, and the concrete effects of the impact, has made the sabotage argument unconvincing to a large part of society.

The urgency of the government lies in stabilizing the (electric) system, guaranteeing emergency supplies of food, water, gas, reordering daily life within the existing difficulties, for which, among other things, it ordered operatives into hospitals, food (distribution) and declared today Monday a day off. It can be predicted that there will be new attacks to re-generate a blackout and to work politically on its consequences. They could be of other characteristics, it is a complex scenario, of many variables, assault fronts, possibilities, actors, times and desperation.

We must not lose sight of the general scenario in which these events take place: the attempt to create a parallel government to force Nicolás Maduro to abandon political power, whatever the form might be. Guaidó announced an extraordinary session of the National Assembly (in content) for today to declare a State of National Emergency, once again making a call to the Bolivarian National Armed Forces with a last-chance warning. Other leaders of the right were again in favor of asking for a violent exit with intervention.

The battle for electricity, the center of the assault at this moment, is not over yet.