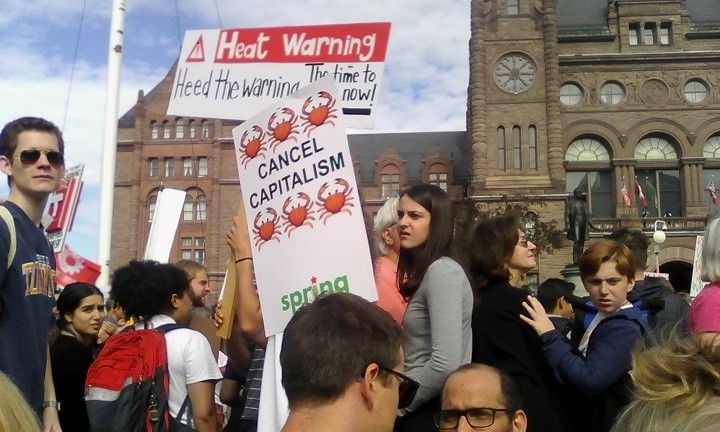 The culmination of Toronto’s Global Climate Strike on Friday September 27, 2019 made history. 20,000 demonstrators flooded downtown Toronto with a dazzling array of colourful, often witty, some devastating posters, vowing to stay the course in the battle with corporate society gone mad in a race to destroy the planet.

Here are a few of my highlights (please forgive heads and banners cut off!). I was astounded at the creativity both in image and word. I managed to scribble down 80 (more or less). Not quite Mao’s hundred, but i’m sure I missed at least 80 more. Leading the march were #FridaysforFuture, S27 Coalition Demands and #Climatestrike

Students were the large majority with parents supporting them:

*If we are done our education, why are kids schooling us?

*If you don’t act like adults, we won’t get to BE adults.

*The climate is hotter than my boyfriend.

(variation *The climate should not be hotter than my girlfriend, or better ‘than ME’)

Some math students: *The planet > profit. (variation *Planet Before Profit) *Cancel Capitalism and *Heat warning Heed the warning: The time is NOW. *There’s no place like the place you live in.

(Eva from Holland and Madalena from Italy ‘It’s like we’re at home. These demos are around the world. What a huge crowd!) Some science students: *There is no ‘planet’ B. (variation *Mars ain’t the kind of place to live in)

*Science, not silence. (variation *Science not to conquer nature but to live in it.)

Some chess players: *We’re in the Endgame.

*What use is money if we aren’t here to spend it?

*This is the ONLY issue.

*You’ll die of old age before we die from climate change.

*Boomers, we will not forget. (variation *STFU Boomers! (shut the fuck up))

*Or more simply, Fuck this Shit.

Some much less polite: *Keep earth clean. It’s not Uranus. *Did you buy Earth dinner before you fucked her?

(variation *Your mama is fucking dying!

Even more politely (a mother carrying her baby): *Love your mother! And another mother-baby: *You only have one mother. Love, respect and listen to her!)) *No Justice No Peace

The vegans were among the few with a solution: *Animal agriculture – 51% of human footprint.

*Veganism is the single biggest way to reduce your footprint.

*The elephant in the room is a COW.

The natives were the star: *No pipeline on stolen land. *This moment isn’t new for the 500+ years of indigenous resistance.

Drumming and chanting set the serious but uplifting tone of the demo.

*Don’t be a fossil fool. *Leave the oil in the soil.

*Save Earth, the only planet with cats.

*When all is said and done, more is being said than done.

*This is NOT a fire drill. (This Is Not A Drill: An Extinction Rebellion Handbook)

*Be the person David Attenborough wants you to be. *The sea is rising and so are we. (variation Oceans are rising) + *You can’t eat money.

*Standing with the trees.

*Are we in the age of stupid?

*Winter is NOT coming.

Lots of anti-coal rhetoric: *It’s getting hot. Take off your coal. A jolly green giant and helpers,

a mini-float of modest cyclists: *We Have part of the Solution Michael is chairman of the Green Committee at his apartment building (‘We reduced garbage by half with recycling. I took the day off work for this.’) *Fill the swamp. Restore wetlands. (and on the back: *Recycle refuse. Reuse rot.) Jeff was inspired to write some poems: *My world’s on fire. How about yours? That’s not the way I like it and I’m getting really bored!

(and on the back: *The ice we skate is getting pretty thin. The water’s getting warm so we might as well swim.) As I was leaving Queens Park, a tree hugger and a surreptitious smoke shared a tree moment. A nice Mexican touch as the party ended, with Lennon’s Image wafting over the thinning crowds and Monarch butterflies preparing for a long journey south: 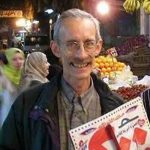