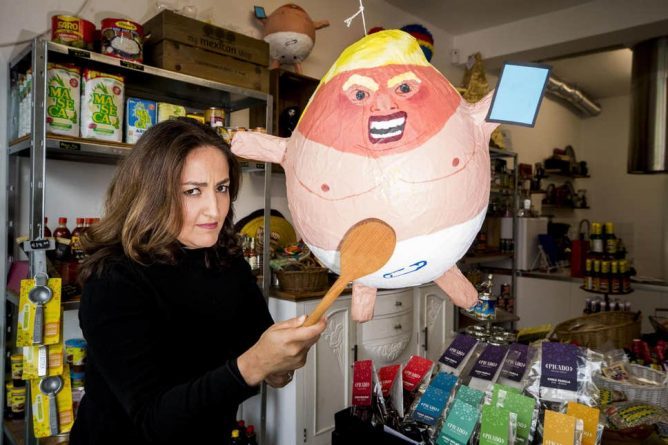 ‘When you whack it you bring all of the goodness out of the sweets or fruit and it symbolizes a new beginning’.

Piñatas modeled on the Donald Trump baby blimp designed to be smashed open by children at birthday parties are now on sale in Dublin.

The pint-sized models, which are made of dried paper and filled with sweets, were produced to mark the US president’s visit to Ireland earlier this week.

Mr Trump and his wife Melania spent two nights at his golf resort in Co Clare and met Taoiseach Leo Varadkar on the trip, which followed on from his three-day state visit to the UK.

After being flown at London protests a few days before, the Trump baby blimp made its first appearance in Ireland at anti-Trump protests held in Dublin on Thursday.

Maria Valdez Cortez-Plower, who was born in Mexico, took inspiration from the blimp when designing the piñatas. She said she modeled them on Mr Trump “so that no one would be feeling harsh about whacking him”.

“When you whack it you bring all of the goodness out of the sweets or fruit and it symbolizes a new beginning,” she said.

“In Mexico they just do it with your favorite character but in Ireland they just find it quite harsh.

“So I decided to do the Donald Trump so that no one would be feeling harsh about whacking him.”

It takes 20 hours to make a piñata. Ms Valdez Cortez-Plower said it is hard to dry them in Ireland because of the wet weather, but the end result is worth the effort.

“They just love it, you just create a big smile on people.”

During his meeting with Irish Taoiseach Leo Varadkar on Wednesday, Mr Trump said that Americans “love the Irish” and that he believed things would work out well with “with your wall, your border” after Brexit.

In response, Ms Valdez Cortez-Plower said: “Well I think he is just a divider, divide and conquer, he just likes to be a divider and to be all the time in the news.”

She said Ireland’s values are different from the US president’s, adding: “People are friendly and want to do something for their lives.

“It is not only about the money, it is to express the culture, community, to be social, to move forward and evolve as a society. Also to be friendly to the environment.