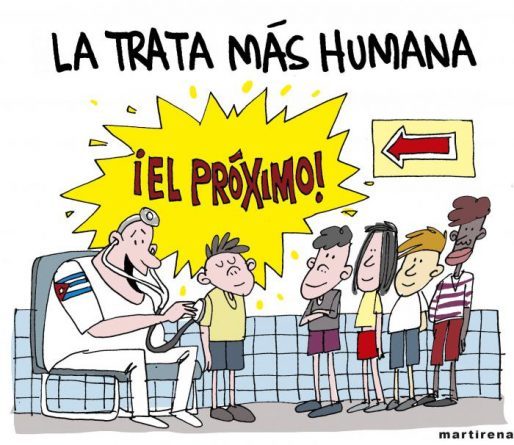 President Donald Trump has an obsession with Cuba and Venezuela, which leads him to be irrational, compulsive, monothematic and rude, repeating absurd arguments that are not even being believed in his own country

President Donald Trump does not cease in his accusations against Cuba. In an interview last Thursday with Telemundo – by the way, the first one offered to a Spanish-language television station – he said: “Do you see what is happening in Venezuela? It is awful. And do you know who is primarily responsible for the problem? Cuba. They have 25,000 soldiers”.

As if that were not enough, he also said that he is going to “fix the situation in Cuba” and that his policy of tightening the blockade and imposing other measures that reverse the bilateral rapprochement reached during Barack Obama’s term could “accelerate the transition towards democracy on the communist island”.

He reiterated that the largest of the Antilles is responsible for the prolongation of the crisis in Venezuela, for the military support it provides to the government of Nicolás Maduro, although he admitted that Juan Guaidó has not been able to “displace” the Venezuelan leader because that is “a process” that takes time.

Definitely, what the US president has with Cuba and Venezuela is an obsession, which leads him to be irrational, compulsive, monothematic and rude, repeating absurd arguments that are not even being believe in his own country.

RELATED CONTENT: Cuba: Where do Washington Millions for the Contra Revolution go?

Cuba has denied these and many other calumnies orchestrated from Washington, because we have the strength of reason and truth. The only troops we have in Venezuela are those that make up the army of white coats of Cuban doctors that helps save millions of lives there, as do thousands of others in many parts of the world. In the Bolivarian nation there are also our teachers and professors, who act as coordinators and advisors of the missions that have raised the quality of education in that country and have taken it to the most remote places. There are the art instructors who rescue and reinforce the national and Latin American identity, and the athletes who work in the recruitment and training of young talents.

Trump’s aberrations, like as those of his advisor John Bolton – another pathological liar – unwittingly expose who is really responsible for the situation in Venezuela: the same ones who try with vehemence to economically suffocate the Cuban people, to conquer us with hunger and diseases, discredit the will and love that spread our collaborators and denigrate the very essence of solidarity.