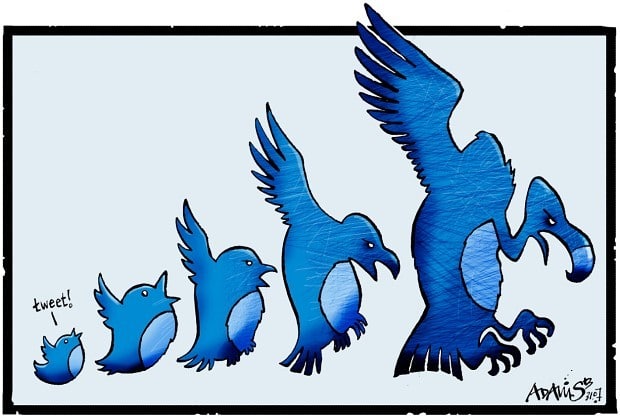 Dozens of Venezuelan public agencies have reported in recent hours that their Twitter accounts were restricted, which has caused outrage at a time when the social networks of personalities and institutions are used to disseminate information to face the Covid-19 coronavirus pandemic. The measures have affected the account of the country’s vice president, Delcy Rodríguez; the Vice Presidency of the Republic, the Central Bank of Venezuela, the Ministries of Education, Science, Housing, and Universities; the Bicentennial Bank, four governors and three media outlets. This occurs just 2 months after another massive block of accounts that Twitter carried out against Venezuelan institutions and sympathizers of Chavismo. 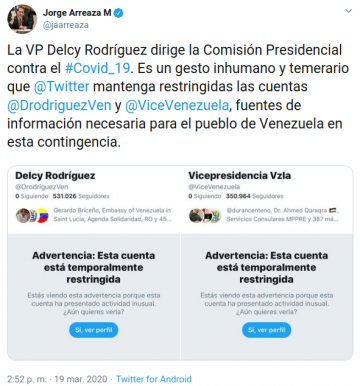 The accounts, for the most part, appear as “temporarily restricted.” According to Twitter , this occurs when it is presumed that you have breached the Twitter Rules . They claim that “they will be able to continue browsing Twitter,” but they will not be able to perform actions such as tweeting, retweeting, or using the Like function, “and only your followers will be able to see your previous Tweets.” In other cases, the account owner will see a message informing them that their account functions were limited for a specific period of time.
In some cases, the account holder is asked to verify their phone number through a text message or phone call, but the problems associated with sanctions against Venezuela sometimes prevent the call or the text message from reaching its destination.

RELATED CONTENT: Media Censorship & OAS’ Participation in Election Process May Ruin Bolivia’s Democracy – Journo
This is a list of the accounts that were restricted between March 16 and 19:

All these accounts are managed by Bolivariana de Puertos SA (Bolipuertos)

Journalists and people dedicated to communication

No information could be found about private media accounts, politicians, artists or journalists identified with the Venezuelan opposition whose accounts have been restricted.

Regarding possible causes, an entry published on March 16 on the company’s official blog Twitter reported that “they will increase the use of machine learning and automation systems to take a wide range of actions on potentially abusive and manipulative content”, which implies that they will use applications and software to automatically detect those accounts that are violating their rules.
On the other hand, they clarify that “although we work to ensure that our systems are consistent, sometimes they may lack the context that our teams bring, and this can cause us to make mistakes. As a result, we will not permanently suspend any account based solely on our automated compliance systems.”
In that article, Twitter also states that they are penalizing those accounts that issue tweets whose content goes against what health authorities recommend doing to protect themselves from the coronavirus.

In another article published in June 2019 on their blog, the Twitter company explained that, as a result of the accusations made against them by American politicians and media about having allowed the alleged interference of foreign countries in the 2016 presidential elections , started an account closure campaign focused mainly on states or governments that are allegedly trying to manipulate their platform.
Twitter claims that it is concentrating on attacking what they call ” state-backed information operations,” that is, state-orchestrated information operations, that may occur on its platform. They claim that states or governments are behind these campaigns aimed at influencing the elections in other countries, and that there are people who take advantage of their institutional power and consciously “abuse” the Twitter service.
Twitter indicates in its blog that they are concentrating on those who carry out this type of activities:

It is possible that Twitter is penalizing accounts that engage in tag campaigns which although they are usual in said digital social network, the company could be frowning upon if they come from states or countries that the US establishment considers as its enemies.

It is not the first time that important Twitter accounts linked to the Venezuelan government or Chavismo have been massively blocked, particularly during critical moments.