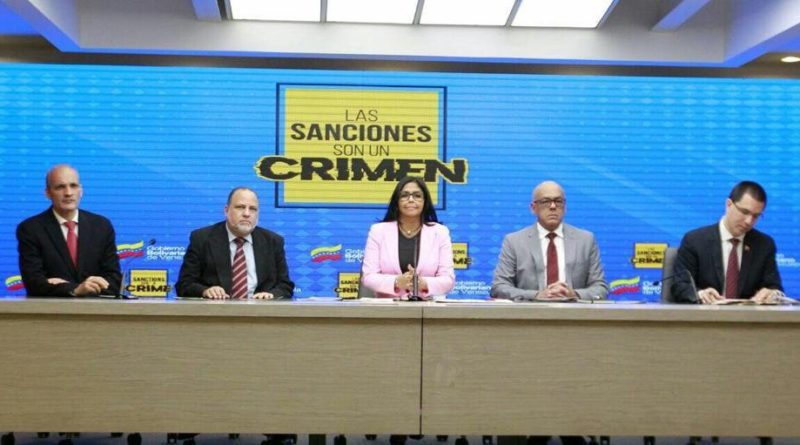 Venezuela has disclosed to the public that on February 13, 2020, it presented a document to the International Criminal Court (ICC) requesting that “the serious crimes committed against the Venezuelan population by the government of United States be investigated”, which brings us to a topic little known to Venezuelans: that of the international criminal court.

Point 8 of the aforementioned document answers the question about whether the International Criminal Court has the capacity to prosecute US authorities. In this sense, the official document says:

The United States of America has not ratified the Rome Statute and, therefore, is not a State Party to that instrument. For this reason, in the document presented by Venezuela before the ICC, the thesis of the “jurisdiction of effects” or “jurisdiction based on effects” is invoked.

We will make some considerations about the latter.

1. The absolute denial of the United States of America

In 2000, during the Bill Clinton administration, the United States signed the Rome Statute; however, the treaty was never presented to Congress for ratification.

In 2002, John Bolton “withdrew” the Rome Statute, later developing national legislation that prevents and penalizes the collaboration of US officials or civilians with this body.

Donald Trump’s government on this issue has taken a firm stance and made decisions that have generated controversy. Thus when the ICC announced that it could assess what had happened in Afghanistan and in the prisons that the United States used to confine the Taliban, it noted that “any attempt to attack US, Israeli or allied personnel to prosecute them will meet with a response. fast and vigorous”. The US announced that it would sanction the ICC and proceeded, in April 2019, to withdraw the American visa from Fatou Bensouda, chief prosecutor of the ICC.

2. The possible connection of States not party to the Rome Statute

This aspect should be looked at over time, observing for example how according to United Nations publications, the United States is part of the countries that declared itself concerned about the Rome Statute from its first discussions, specifically about the possible competence of this body on States that are not part of the Statute.

Thus, in the document “Rome Statute: Questions and Answers” it can be read that “the main objection of the United States referred to the concept of jurisdiction and its application to non-Party States.”

This statement leaves in historical memory a bit of what the discussion was about, how the permanent Criminal Court to which it aspired for many decades should be. There we can see that two opposing models were raised at the final debate :

One of them, which was held by the countries related to it, led by Canada, among which were Australia and Germany, who worked for the creation of as strong and as independent court as possible. The principles that this group was fighting for were the inherent jurisdiction of the ICC over crimes of genocide, crimes against humanity and war crimes; removing the possibility of a Security Council veto on prosecution; an independent prosecutor with the possibility of initiating prosecution of his own free will; and the prohibition to make reservations. So much so, that the German delegation proposed that the Court have worldwide jurisdiction based on the principle of universal jurisdiction, covering all crimes under international law, regardless of where, by whom, or against whom they would have been committed. The other model, which included the United States, China and India, was concerned about its sovereignty and the protection of its own nationals, wanted a weak and symbolic court, conceiving it as a permanent ad hoc court, activated by the Security Council.

We can understand that from the conception of the International Criminal Court, the content of the document could be applied to countries that had not ratified it, such as the United States and China, which is in keeping with the spirit of those years where the idea of universal jurisdiction was defended, or of the inherent nature of human rights, as being capable of constituting a part of the Law – jus cogens – so fundamental that no State could contradict it under any circumstances.

In this argumentative line, we could see that the entire internal legal framework that the United States built to prevent its nationals from collaborating or suffering actions of the International Criminal Court makes sense.

We must remember that, under the premise of the legal equality of the States, as well as the primacy of the norms dictated in the international order for international relations, the International Criminal Court could not recognize as valid the US right to deny its own rules.

Being that at the present moment a whole debate is taking place because, changing criteria, the International Criminal Court admitted on March 5, 2020 that the Prosecutor examine the events that occurred in Afghanistan.

Regarding this possibility, we must emphasize that: a) this interpretation is always subject to contrary opinions that incorporate new elements; b) that the exercise of jurisdictional law is not an isolated, neat process, detached from the elements of force that exist in international reality; c) that the case of Afghanistan must be followed to see if this is the reasoning of the International Criminal Court; d) that this is not the argument invoked by the Bolivarian Republic of Venezuela in its referral.

3. The “jurisdiction of effects” thesis

The document presented by the Venezuelan State expressly states that it refers the case to the ICC under the “jurisdiction of effects” thesis, which we do not find – at the stage in which this document is published – as a term expressly used in the Statute from Rome.

However, we must remember that since the entry into force of the Rome Statute on July 1, 2002, the ICC has jurisdiction over crimes committed on the territory of States that have ratified the treaty.

The “effects jurisdiction” thesis is, however, a well-known figure in US legal system, where, for example, it orders the courts to define whether they have jurisdiction – or not – in a matter evaluating whether the acts they judge produce direct effects, substantial and reasonably foreseeable in another State, as is the main allegation of Venezuela in relation to the unilateral coercive actions that the United States has dictated on its territory, the officials and / or Venezuelan affairs.

Having made these considerations, we must remember that in the Venezuelan case, the Bolivarian Republic joined the International Criminal Court on July 13, 2000 through the Law Approving the Rome Statute; that the International Criminal Court on February 7, 2018 announced that it would open a Preliminary Examination of Venezuela in relation to the events that occurred in the 2017 protests; and that, finally, it decided to take what Venezuela had stated as one of the aspects of this examination, since, in its opinion, they were events that occurred at the same time and place as those that its office was already investigating.

We must observe how these events are developing, including how two opposing complaints are going to complement those that originated in 2018 the Preliminary Examination, and this one that sheds light on the imperialist acts on Venezuela before being able to conclude whether the International Criminal Court decides to assume its international role or continues to be a body that grants international powers a jurisdictional arm.