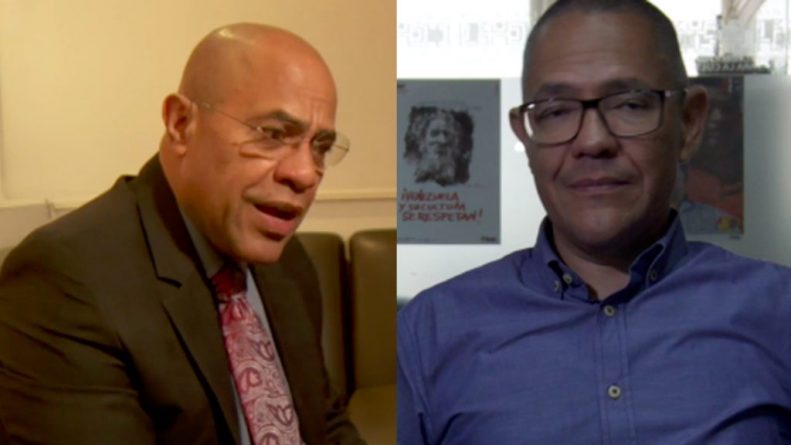 Vladimir and Ernesto Villegas – both well-known Venezuelan journalists – one part of the Maduro government and the other an ex-Chavista, navigate opposing sides of Venezuela’s political divide while remaining true to each other and to themselves. Ed Augustin reports.

NARRATOR: The TV show Vladimir at one o’clock is one of the only slots in Venezuela which gives space to voices from across the political spectrum. The host, Vladimir Villegas, was once a vice minister in Hugo Chávez’s government. But as the years went by, he became a critic.

RELATED CONTENT: Sentimental X-Ray of Chavismo (III): The Immense Fatigue
VLADIMIR VILLEGAS: My differences with the government of Hugo Chávez began from the moment he wanted to change the 1999 constitution. He wanted to change it so as to strengthen his hold on power and to restrict rights and democratic advances enshrined in the constitution. The government started to behave like other socialist models we’ve seen in the world those which are now extinct and those which remain.
ERNESTO VILLEGAS: That’s Fidel [Castro], Camilo [Cienfuegos], President Chávez – I mean President Maduro. There are more over here.
NARRATOR: His brother, Ernesto Villegas, couldn’t disagree with him more. He’s not only a passionate Chavista, he’s the Culture Minister.
ERNESTO VILLEGAS: You’ve got to be pretty mean not to admit that over the course of the Bolivarian Revolution there has been an explosion of culture like never before. And there is now also a national pride that didn’t exist before.
NARRATOR: The two brothers agree that things are bad right now in Venezuela. But they disagree about why.

RELATED CONTENT: These are the Anti-Chavista Groups That Pompeo Could Not Unite
VLADIMIR VILLEGAS: There is very little that can be salvaged from the Maduro government. Before, if you went to a cafe to eat arepas, our typical breakfast, you had to wait in line because there were so many customers. But today most Venezuelan’s cannot buy arepas in a cafe. Most people just can’t afford it. Why does socialism have to be a synonym of limitations, of poverty, of lack of freedom of speech, of repression, and even of inequality because there are privileged casts here.
QUESTION: Tell me what’s going on in Venezuela for someone that doesn’t know anything about the situation…
ERNESTO VILLEGAS: Right now Venezuela is under siege by the most dangerous economic and military power on earth – I’m referring to the US and its allies. This has led to grave suffering for Venezuelans. They have tried to violate Venezuela’s sovereignty on its borders [in an attack] disguised as “humanitarian aid”. They’ve tried to install a puppet government, remote-controlled from the US. I hope that this situation – the current confrontation with US imperialism – makes people on the political left think twice before abandoning this government because today there is no option but to close ranks around the leadership of Nicolás Maduro to face up to US imperialism. Anybody who says they are left-wing and undermines this unity is playing into Trump’s hands. So it’s a very strange left that comes up with all manner of arguments that open the way for the US marines.
VLADIMIR VILLEGAS: There was a gradual process of militarisation in our country. Public institutions were hijacked. For example, the separation of powers set out in the constitution has been violated, even under Chavez. They took control of the District Attorney’s Office, the Supreme Court, the Ombudsman, the comptroller. They took away the autonomy of the central bank. And all this has gotten worse under the government of Nicolás Maduro. People have gotten poorer, there are political prisoners. I saw Nicolas Maduro in prison when he was a chávista leader. I was at lawmaker at the time and I could visit prisoners. I saw him locked up in a cell. And now he has political prisoners living in similar or even worse conditions. So what’s revolutionary, Bolivarian or progressive about that?
ERNESTO VILLEGAS: This is an old debate in our country: whether there are political prisoners or imprisoned politicians. My father was a political prisoner during the Pérez Jiménez dictatorship and during Venezuela’s period of supposedly “representative democracy”. His “crime” was not to have assassinated anybody, it wasn’t to have shot anybody, it wasn’t to have encouraged others to burn people alive, it wasn’t to have sabotaged military installations or public services. My father’s “crime” was that he was a communist. And in Venezuela today nobody is in prison for their political beliefs or because of the party they belong to. If this were really happening, then we wouldn’t have this wide range of opposition political leaders who freely call demonstrations and do politics legally. The politicians that are in prison have been jailed because they have broken the law.
QUESTION: Is it uncomfortable that you are brothers and that you see things so differently?
VLADIMIR VILLEGAS: It’s not uncomfortable, it’s just the way things are. He has the right to think as our father taught us and act accordingly, and it’s my right to have my own opinions, – just like I was taught at home. Both of us act according to our beliefs, and that’s the way it should be.
ERNESTO VILLEGAS: We have our political differences and our disagreements take up a bit of our time but the rest of the time our relationship is based on love and common upbringing. These differences don’t stop us loving each other.