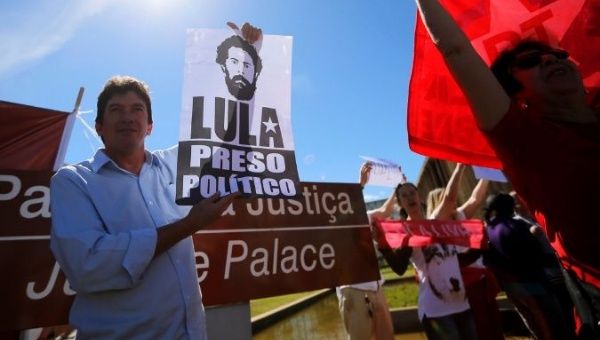 “Lula is a political prisoner, sentenced and imprisoned without having committed any crime,” the PT said in a statement.

“Contrary to what they affirm today in a bid to downplay their illegal moves, (Judge Sergio) Moro and the prosecutors of the Car Wash commission are transcending all the limits of legality and the limits of the rule of law,” the party said in a statement published on their website.

They added that such moves consisted in “crimes against Lula’s freedom, against the right to defense and the duty of a legal procedure, and, most of all, against people’s sovereignty in the electoral process.”

According to the party, the messages leaked by The Intercept “demonstrate, including to those who would deny the reality, that Lula is a political prisoner, sentenced and imprisoned without having committed any crime, but only the crime of having posed a threat, supported by the people’s will, to the outcome of the (presidential elections) desired by the elites.”

The Intercept said it was only beginning to report on an “enormous trove” of leaked messages between Moro and prosecutors on Telegram, an encrypted messaging platform, that it had received from an anonymous source. It said the messages raise serious questions about the impartiality of Moro, a former judge who sent the ex-president to prison.

The excerpts, released on Sunday, included exchanges in which Moro made suggestions to prosecutors about the focus, pace, and sequence of investigations.

Attorneys for Lula, a leftist icon who remains one of the most influential opposition figures in Brazil, have been petitioning the Supreme Court for his release and seized on the reports to argue that his sentence should be overturned.

Lula, who faces at least six other trials on corruption charges, ran for president last year but was blocked from appearing on the ballot because of his conviction by Moro, which was upheld on appeal. Lula led opinion polls heading into the election, which was won by far-right candidate Jair Bolsonaro.

Some excerpted conversations published showed prosecutors discussing how to block journalists from interviewing Lula in jail during last year’s campaign. A message attributed to one of the prosecutors, Laura Tessler, suggested that such an interview could help Lula’s stand-in on the Workers Party ticket.

The Intercept said it had secured the archive of texts, audio, and video outside of Brazil so “numerous journalists have access to it” and no one country can block use of the material.