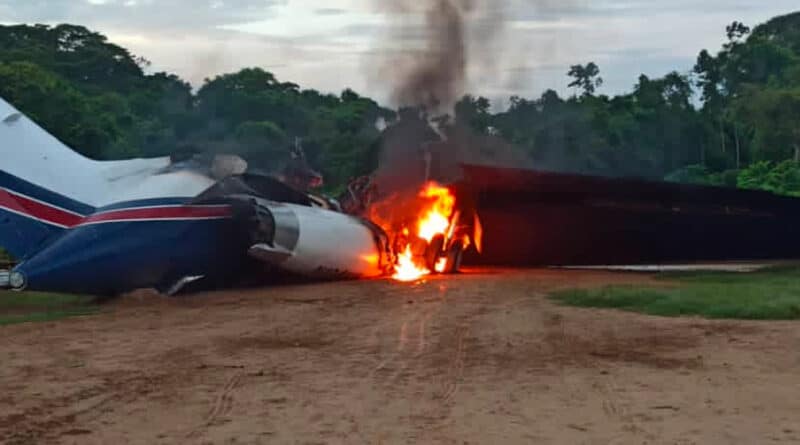 The Gulfstream II jet destroyed on a makeshift airfield near the Colombian border was the third US-registered aircraft taken down for violating Venezuela’s airspace in less than five months—despite Washington’s claims that President Nicolas Maduro is aiding drug-trafficking into the USA.

A Grumman Gulfstream IISP jet, with the US registration number N104VV, was discovered at the site in the Caño Amarillo sector of the forested Catatumbo region of Western Zulia state.

Meléndez said the ​Integral Aerospace Defence Command had “immobilised” the jet for “flying over our airspace without authorisation.” The photos showed the aircraft in pieces and burning on the makeshift dirt airstrip, which was dynamited and put out of action.

The narcotics chief added that the troops had also destroyed a Triton truck, a Suzuki motorcycle, flight navigation equipment and 200 barrels of Jet A1 fuel totalling 25,000 litres (5,500 imperial gallons)—enough to fill that model of aircraft almost twice over.

“Nothing will stop us!” Meléndez declared.

Venezuelan news website Aporrea reported that the plane was part of a “fleet” of “narcojets” used to smuggle cocaine from Colombia to Venezuela, then on to Mexico and finally the USA. The Gulftreamn II has a range of around 4,000 miles (6,500 km), more than enough to reach the US directly.

The National Bolivarian Military Aviation (AMNB), Venezuela’s air force, shot down a US-registered drug-trafficking aircraft in July and another in September after they violated the South American nation’s airspace. In March, US Attorney-General William Barr indicted Venezuelan socialist President Nicolas Maduro for facilitating drug trafficking into the US.

The Catatumbo area lies on the border with US ally Colombia, major source of cocaine.