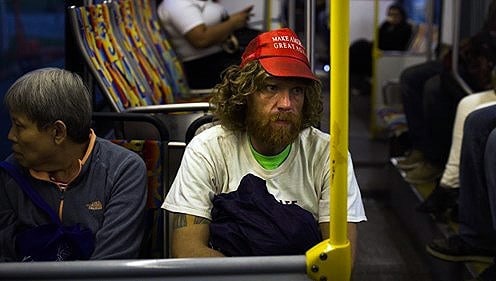 In reference to the depressing television show put on by Donald Trump on February 4 to present the traditional State of the Union address, I am borrowing for this article the title of an extraordinary satirical novel by Puerto Rican writer Giannina Braschi. Braschi’s English-language debut is what can be considered the novel’s first major tribute to Latino-Caribbean immigration to the United States. Using very creative literary resources, she dissects the terminal crisis of the US Empire and that’s why I relate her book to the Trumpian discourse-spectacle.

The country recounted by Brashi after the attack on the Twin Towers, where people who resemble headless chickens can be seen, is also the one we saw in Trump’s appearance before the U.S. Congress. This is a real piece of the worst bufo theater staged in the same place where the next day, following a script written well in advance, the Senate put an end to another bufa play by acquitting the president in the impeachment or political trial, opened by a weak and mediocre Democratic Party.

Trump and his entire gang are stubborn liars who have managed to overcome any mark of mendacity established in a previous government, even though lying has always been a common recourse for politicians in Washington. We know that. But listening to this speech one could not escape the astonishment, for hardly anyone, on that or any other important podium of world politics, has lied as much and in such a cynical and hypocritical way as the president of the United States on this occasion. In a country with millions of poor and helpless people, basic social rights dismantled, unions terribly diminished, infrastructure in critical condition and growing and scandalous social inequality comparable to that existing in 1929, a Trump drugged by narcissism and demagogy spoke of his very great achievements in terms of salary, employment, health and education which, as any moderately informed person knows, have nothing to do with reality.

An occasional good economic wind cannot hide such a social tragedy. Not surprisingly, the anti-immigrant and irrepressibly xenophobic tone of the speech was very insistent, a kind of worship of the wall god, underpinned by invented figures that would prove the criminal nature of those who arrive at the wall from the south: mainly the Latinos. Crazy as it sounds, this speech suits the Trump voter very well. They are the headless chickens of Braschi, alienated if we speak with political correctness. Alienation is, without a doubt, the worst crime of the capitalist system against human beings.

In a gesture that underscores his adherence to the Monroe doctrine, Trump charged Cuba, Venezuela and Nicaragua: “As we restore U.S. leadership in the world, we continue to support freedom in our hemisphere. That is why my administration reversed the failed policies of the previous administration on Cuba. We are supporting the hopes of Cubans, Nicaraguans and Venezuelans to restore democracy.”

He lies once again that he is “restoring” the leadership of the United States when it has never rolled so low before people and governments as under his command. He also lies by saying that he supports freedom “in our hemisphere” when his closest friends are the fascist Bolsonaro, the repressive Piñera, the narco-paramilitary governments of Ivan Duque and Juan Orlando Hernandez, the hated and corrupt Haitian President Jovenel Moïse, and the murderous dictator and presidential candidate of Bolivia, all of whom are repudiated by their own people.

He also lies when he invokes the hopes of the people because the only thing that interests Trump is Trump. It would be grotesque to always listen to a statesman brag about the murders he orders. The fact that he is president, even of a powerful country like the United States, does not authorize anyone to break the law at will, even if some of that is coming out of the defense that the Republicans have made of their leader in the impeachment sessions. But frankly, it is repugnant to see this man, so vulgar besides, displaying as a trophy the head of a fighter for the liberation of the peoples of the Middle East like the Iranian general Suleimani.

The highlight of Tuesday’s election show was the presence of Juan Guaidó, who was received the next day at the White House. But that is all Washington can do for him, since the coup and terrorist actions have not succeeded in overthrowing Maduro and, on the contrary, the Bolivarian and Chavista Revolution has become ostensibly stronger.

There’s nothing like having good friends when you live almost in the jaws of the monster. After Trump’s bluster, nothing is more auspicious than the visit of Russia’s foreign minister, Sergei Lavrov, to Cuba, Mexico and Venezuela. United Latin America is what Russia wants, reads an official statement from Moscow.