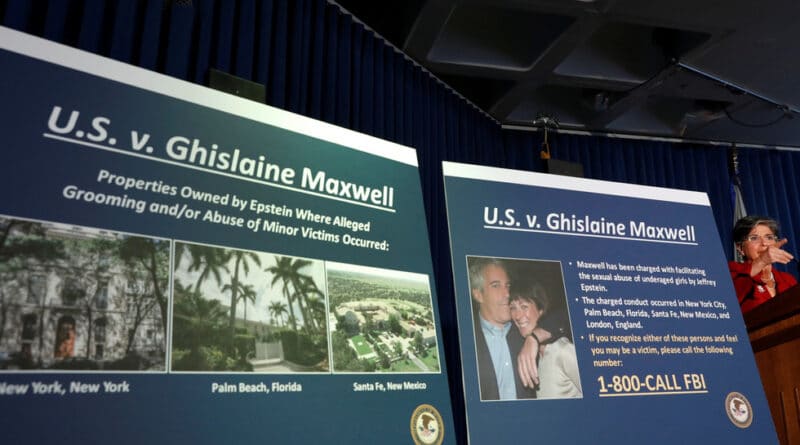 July 31, 2020.-  Newly unsealed files tied to the Jeffrey Epstein sex-trafficking case imply that former US President Bill Clinton visited the investor’s private island along with “young girls,” and that the FBI knew well about the minors’ abuse.

Comprising hundreds of pages of documents, the trove was released on Thursday night following a judge’s order last week to have it unsealed, over the objections of Ghislaine Maxwell, a former girlfriend to Epstein who has recently been charged as an accomplice in his alleged sex-trafficking operation.

The records stem from a 2015 defamation suit filed by Epstein accuser Virginia Giuffre, which was placed under lock and key after the case was settled in 2017, but was recently unsealed, as a result of a lawsuit brought last year by conservative blogger Mike Cernovich and the Miami Herald newspaper.

“When you were present with Jeffery Epstein and Bill Clinton on the island, who else was there?” one witness – presumably Giuffre – was asked during an interview, to which she replied that Epstein, Maxwell, an unidentified woman named “Emmy” and “2 young girls” had been on the island with the former POTUS. The witness did not elaborate on Clinton’s interactions with the girls, however.

The same witness also told her attorney in 2011 that she had overheard Epstein saying that Clinton owed him “favors,” but noted she couldn’t tell whether he was joking.

“He would laugh it off. You know, I remember asking Jeffrey ‘What’s Bill Clinton doing here?’… and he laughed it off and said ‘well he owes me a favor,’” she said. “He never told me what favors they were. I never knew. I didn’t know if he was serious.”

“He told me a long time ago that everyone owes him favors. They’re all in each other’s pockets.”

Six references to Bill Clinton in Virginia Roberts' chat with her lawyers on April 7, 2011:

"Yes. I do. It was a laugh though. He would laugh it off… I didn't know if he was serious. It was just a joke." pic.twitter.com/InugMgHOz5

How do you ignore what is objectively of the highest news value?

One of America’s top law enforcement agencies was also apparently aware that underage girls were still being abused at Epstein’s properties as far back as 2011 – years after he was sentenced for similar crimes in his first criminal case. During her defamation suit, Giuffre said she had provided the FBI a now widely circulated photo of herself and the UK’s Prince Andrew – where he is pictured smiling with an arm around her bare waist.

Remember that famous Prince Andrew photo with Ghislaine Maxwell and the victim?

The FBI had their own copy for years – even before the victim's 2011 FBI interview.

In 2014, moreover, Giuffre contacted the FBI to request evidence they had previously seized from Epstein’s residences to aid her civil case, suggesting the bureau had for long been informed of her allegations regarding Epstein and his continued involvement with minor girls.

The minor victim was asking the FBI for the evidence (photos and videos) they seized from Epstein.

So she could prosecute her civil case. pic.twitter.com/WlISCmN6Ze

The FBI was in contact with Epstein and Ghislaine Maxwell's minor victim back in 2014.

Yet they did nothing. pic.twitter.com/ItC7kOGO0i

President Donald Trump also made an appearance in the unsealed papers. However, an associate of Epstein, Juan Alessi, said in an interview that Trump “never” stayed overnight while visiting Epstein’s Palm Beach estate, and that he did not receive any “massages” there, as “he’s got his own spa.” An alleged victim also maintained that while Trump and Epstein were “good friends,” Trump made no attempts to “flirt” with her.

RELATED CONTENT: Partisan Media Coverage of Epstein Masks His Links to Both Sides of the Political Establishment

Despite repeatedly insisting he had no ties to Epstein’s sex-trafficking ring, legal scholar and former Harvard Law School professor Alan Dershowitz is directly accused in the documents of having “sexual relations” with an underage girl. He is also said to have witnessed “the sexual abuse of many other minors by Epstein and several of Epstein’s co-conspirators,” and would later help to negotiate an undisclosed immunity deal for himself during Epstein’s first criminal case.

The Ghislaine Maxwell (Epstein) documents have been unsealed.

Will be posting excerpts here –

Starting with allegations of minor being trafficked to Maxwell, Prince Andrew, and Alan Dershowitz (as prev. alleged).

Not only did Dershowitz abuse the minor, but he helped draft a non-prosecution agreement that gave Dershowitz immunity.

More than 1,000 pages of documents from Giuffre’s civil defamation case had previously been released in August 2019, indicating that a long list of wealthy and powerful figures regularly spent time with Epstein at his lavish properties. One day after that trove was unsealed, Epstein was found hanging in his Manhattan prison cell, dead from an apparent suicide after being charged with sex trafficking and imprisoned some weeks previously.

Maxwell was arrested and charged with procuring minors for sexual abuse earlier this month, after keeping a low profile in the period following Epstein’s death. She has pleaded not guilty to six criminal counts and remains in custody without bail, after prosecutors had labeled her an “extreme” flight risk.

Featured image:  US Attorney Audrey Strauss speaks at a news conference announcing charges against Ghislaine Maxwell for her role in the sexual exploitation and abuse of minor girls by Jeffrey Epstein. ©  Reuters / Lucas Jackson