Fascist US War Profiteers Are the Real Danger, Not Russia

Fascism Can’t Be Defeated Here While U.S. Funds, Trains, and Supplies Weapons to Fascist Governments Around the World

Hungry for Russia’s oil and gas, Washington is lying its way to war again
According to Avril Haines, the former head of the CIA and current director of national intelligence, Russia is on the verge of invading Ukraine. This is yet another lie brought to you by the same people who falsely claimed that Iraq had weapons of mass destruction or that Syria “gassed its own people” and so on. The US would lie its way into WWIII before admitting that its wars are fought one reason alone: to make rich men richer. Russia’s vast mineral, oil, and gas wealth is what the US is really after. 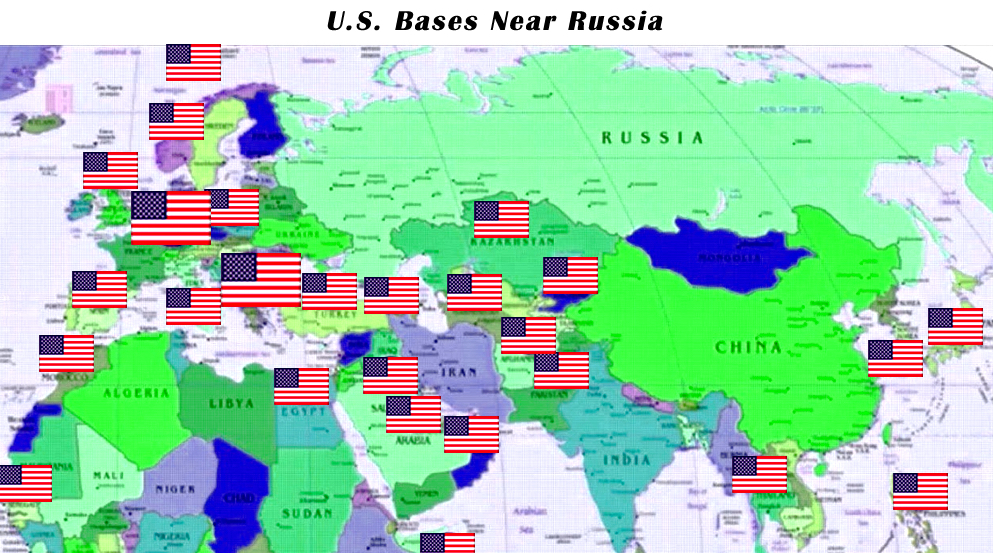 Is Russia a threat to US workers? Last year, Russia’s military budget was under $62 billion. The official budget of the US military budget is projected to be $753 billion—12 times the size of Russia’s. NATO’s joint annual military spending tops $1 trillion and is the rise. The real threat to workers is that every social benefit we’ve fought for will be sacrificed to feed the war profiteers at the trough of the ever-ballooning war budget.

Here’s the truth: the US has been on a steady march to push troops closer to Russia, despite assurances that US/NATO forces would not move “one inch eastward” in the words of US Secretary of State James Baker in 1990. To raid resources, expand markets, and exploit more workers, the US and the EU want Russia under their boot just like they’ve got Ukraine, Poland, and other countries of Eastern Europe. This would not only be a disaster for Russian workers, it would also increase the capitalists’ power to crush the living standards of workers everywhere.

The capitalists “served and protected” by the US military want complete and exclusive access to the land, resources, and labor of the world. That’s why they’re so desperate to replace the independent governments of Russia, Belarus, China, Iran, Cuba, Nicaragua, and Venezuela, all of which they demonize and all of which have been subjected to harsh US economic sanctions, terrorist attacks, and other forms of war.

US installs fascists to enforce corporate pillage of Ukraine
While the big business media incessantly beat the drum for war with Russia, they bury the fact that in 2021 alone, the US government pledged $400 million in tax-payer dollars to build up the military power of the fascist government of Ukraine which the Obama/Biden administration installed after a violent coup in 2014. The coup accomplished two main goals for the U.S.: Ukraine was forced to submit to the control of US and EU banks, and it became a major buyer of US weapons, which are now aimed at neighboring Russia. The US-backed government in Kiev relies on fascist terror to crush resistance to their policies of gutting social programs, destroying pensions, and privatization, which have resulted in mass unemployment and hunger throughout Ukraine.

Since 2014 the country has seen an explosion of terrorism against trade unionists, Roma, Jewish, and LGBT people. Fascist gangs like the C14 patrol the streets of Kiev with the official sanction of the government. Living standards have declined to the point that 30% of Ukrainian children suffer from hunger, according to the UN.

Anti-fascist fighters and their families in Donbass shelled by US Bombs
The people of Ukraine have resisted the attempted fascist takeover of their country. In the eastern part of Ukraine, in the Donbass region, anti-fascist fighters have waged a bitter war to defend the territories known as the Lugansk People’s Republic (LPR) and Donetsk People’s Republic (DPR). Since 2014, the Ukrainian war on the Donbas has killed nearly 14,000 people including thousands of civilians.

In 2015, leaders from Ukraine, LPR, DPR, and Russia met in Minsk, Belarus to work out a diplomatic cessation of the war in the Donbass. They agreed to self-government and territorial independence for the Donbass. But in practice, the US-backed Ukrainian government has done next to nothing to respect this agreement. Rarely does a day go by without some fascist Ukrainian paramilitary unit committing an act of terrorism against the people of the LPR and DPR. Ukrainian forces recently captured and tortured a Russian ceasefire monitor in Lugansk and carried out an armed attack on a settlement of civilians in the demilitarized zone of the DNR.

In April, Ukraine’s President Zelensky dropped all pretense at diplomacy when he declared that “NATO is the only way to end the war in Donbas.” Russia has made it clear that they would respond forcefully to any major escalation in the war as a matter of defense. It must be remembered that nearly 27 million Soviet citizens were killed in the war against the German Nazis. People of all nationalities in Russia do not want armed Ukrainian fascists menacing their country. They will respond to the threat by force if necessary.

Biden’s support of Ukrainian fascism comes home to roost
The fascist hell that Ukrainians are living through is what the US wants for Russia. But this future may come first for the United States if we workers don’t get to the root of the worldwide fascist movement. Above all else, the ultra-rich want governments that answer to the profit motives of banks and corporations. If for that purpose they feel they need to rally their shock troops under the swastika and rule by open terror, that’s what they’ll do. US-backed Poland and Hungary have already taken this path.

US-based fascist militias have been traveling to Ukraine to train with groups like the fascist Azov battalion, which is a unit of the National Guard of Ukraine funded by US taxpayer dollars. Andriy Biletsky, commander of the Azov battalion and former member of the Ukrainian parliament, in his own words states: “The historic mission of our nation in this critical moment is to lead the white races of the world in a final crusade for their survival against subhumans.” These is the ideology of the “white power” movement that Rittenhouse, the Proud Boys, and others are a part of.

Fascists are puppets of the super-rich that use racism to divide and terrorize the people so the rich can hold on to their stolen wealth. This describes Kyle Rittenhouse to a T. His trial and acquittal were a major advance for the capitalists behind the U.S. fascist movement who seek legal protection and popular support for their terrorist troops.

It’s imperative that US workers of all nationalities show up en masse to oppose racism and fascism. The fascists can only be defeated in the streets through mass action, not through the capitalist, white supremacist US courts and not be relying on the Democratic Party which funds fascists in Israel, Ukraine, and beyond. The fight must also show solidarity with our brothers in sisters in Ukraine and Russia. We must demand that the US withdraw all support to the fascist government of Ukraine. We can’t expect to win the fight against fascism here while it’s fueled by US taxpayer dollars abroad.

No to war with Russia—workers must unite to fight the fascists here and in Ukraine
The Biden administration is asking US workers to side with the fascist government of Ukraine in a war to colonize Russia. We’ll have none of it. From Kenosha to Charlottesville to Brunswick, Georgia, we’ve lost too many of our own to racist and fascist violence here. It’s time we come together and show the world that we will not be ruled by fear. Honor the martyrs of Ferguson, Kenosha, Donetsk, and Lugansk and the thousands more fighting fascism around the world.

Unite to Defeat Fascism and Racism from the U.S. to Ukraine!

Down with Fascism and White Supremacy, Up with Workers Power!

Featured image: US Soldiers coordinating with members of the Azov battalion, a neo-Nazi unit of the National Guard of Ukraine.