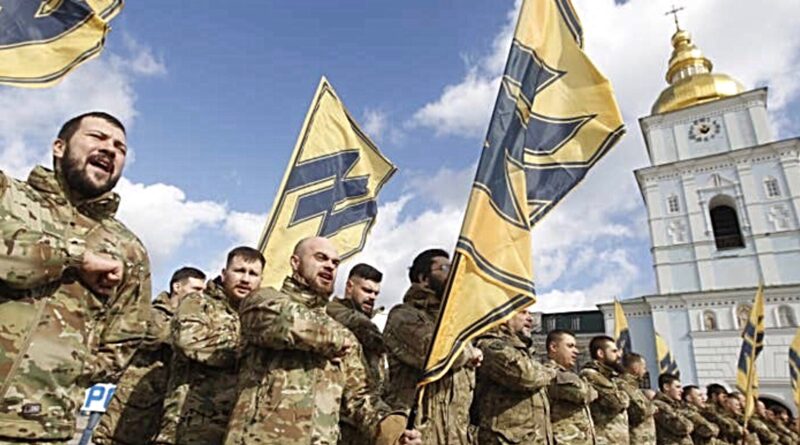 I warn about World War II repeating itself not because I expect Washington’s currently escalating anti-Russian proxy war in Ukraine to turn into a nuclear confrontation any time soon; as Moscow-based international affairs analyst Mark Sleboda recently assessed, the possibility of such a conflict between the U.S. and Russia emerging as a result of Ukraine is at least for now remote, with Syria representing a riskier battleground in that regard. The danger I’m talking about is longer term and more insidious than the conflict in Donbas, destructive and destabilizing as it is.

I’m talking about the general trend towards fascistic nationalism and war buildup throughout the capitalist world, which the developments in Ukraine provide a prelude to. As global crises like the depression, the climate catastrophe, and the pandemic deepen, the reaction from an increasingly desperate bourgeoisie is going to replicate the types of horrors that Ukraine is experiencing during its ongoing paradigm of Nazi-esque rule.

These are horrors that the imperialist powers, with their drive towards militarily subduing Eurasia’s rising anti-imperialist powers and towards crushing global class struggle, are eager to proliferate. It was an underhanded push by the Obama administration in 2014 that installed the fascist “Euromaidan” government into power in Ukraine, one whose replacement since then by a neoconservative cutout politician has retained its nature of ethnic cleansing against Russian speakers and other targets of Ukrainian nationalism, unprecedentedly destructive neoliberal warfare against Ukraine’s poor and working class, Nazi militias which recruit from white supremacists around the globe, suppressions of journalism and freedom of expression, and military provocations against a nuclear superpower.

“There are neo-Nazi pogroms against the Roma, rampant attacks on feminists and LGBT groups, book bans, and state-sponsored glorification of Nazi collaborators,” The Nation’s Lev Golinkin wrote in 2019. “These stories of Ukraine’s dark nationalism aren’t coming out of Moscow; they’re being filed by Western media, including US-funded Radio Free Europe (RFE); Jewish organizations such as the World Jewish Congress and the Simon Wiesenthal Center; and watchdogs like Amnesty International, Human Rights Watch, and Freedom House, which issued a joint report warning that Kiev is losing the monopoly on the use of force in the country as far-right gangs operate with impunity.”

Such is the way that fascists fill the power vacuum that emerges in a failed state, which Ukraine has become amid its ever-worsening corruption, inequality from post-2014 extreme neoliberal shock doctrine policies, and pandemic deaths that lately have been spiraling out of control.

The fascists, with help from their NATO puppeteers, have plunged Ukraine into terror, poverty, and war by gutting and replacing Ukrainian society’s foundations. The looting of the public sphere by oligarchs, which has become commonplace in post-Soviet countries and has been accelerated by the installation of Ukraine’s fascist regime, is cemented through the enforcement of a noxious racial nationalism which rewrites the country’s history to justify the glorification of fascism and the crushing of organized resistance to capitalist power. The Ukrainian Nazi collaborators who assisted in the Holocaust are held up by the ruling institutions as the country’s founding fathers, communist-era monuments have been removed, the government has aggressively pushed Nazi propaganda about fabricated communist atrocities like the “Holodomor,” and it’s been made illegal to publicly object to the portrayals of Ukraine’s Nazi collaborators as heroes.

“The attempt after the Maidan putsch to take control of the country, purge all the political representation and opposition to the Maidan, lustrate the then-governing Party of Regions, ban the Communist Party and all other leftist parties in the country, this was an attempt to rewrite the political DNA, the geopolitical orientation of Ukraine permanently to the West,” says Sleboda. “And they needed this blank slate without any political representation of East Ukraine to do that. This is a nation-building project. Nations are largely built, they have some limited amount of organic elements. But they do require a historical basis. In order to create an anti-Russian Ukraine, the only real period of history they have to fall back on to create this is these World War II-era Nazi collaborators. Which is why in Ukraine today, after the Maidan putsch in 2014, you see the celebration of these. They are the ‘founding fathers’ of the country. They are the heroes whom it is actually illegal in that country to challenge that characterization.”

This model of creating a safe laboratory for fascism and imperialist warfare, where the reactionaries uproot a culture so that they can construct a twisted new cultural hegemony in its place, is going to be replicated in the imperial center the United States. The U.S. imperialists are already exporting it to other Washington-aligned countries like India, where the Hindutva fascists — who are backed by the U.S.-aided BJP government — have been routinely carrying out murders of Muslims to further Hindu nationalism’s goal of ethno-religious purity. And when U.S. capitalism’s crises get severe enough, the equivalent is going to be done here.

In America, the “nation” that the fascists try to build will be a Christian theocracy, where an American exceptionalist version of God is given the unchallengeable role of the Ukrainian Nazi collaborators or the Hindu deities. The targets of the campaign to cleanse society here will be black people (as we’re seeing with the right-wing media’s campaign to make Derek Chauvin into a martyr), brown people (as we’re seeing with the ever-expanding ICE concentration camps), and Asians (as we’re seeing with the recent explosion of anti-Asian hate crimes motivated by the media’s cold war demonization of China), as well as Natives, Jews, the LGBT community, and other groups that the far-right sees as a threat to Christian supremacy.

This campaign of terror and mass extermination will be solidified by an effort from the state to bring about Christian dominionism. As Salon’s Paul Rosenberg writes, “the theocratic end they envision is chillingly akin to ‘The Handmaid’s Tale’ — reason enough to warrant far more attention than they’ve gotten so far.” In the America they want, protections for LGBT people against discrimination will be eliminated, Christian fundamentalism will be deeply integrated into the school system, and there will be institutional enforcement of the narrative that the U.S. is a “Christian nation” where the “true Americans” are being oppressed by anti-discrimination laws.

The same rallying cry of “defending the nation” will continue to be applied to their campaigns for banning abortion, or for detaining immigrants, or for suppressing the class struggle; the members of America’s right-wing Christian camp have already adopted Senator Joe McCarthy as one of their heroes, reflecting 21st century Americanism’s drive to censor communists, revive the old Cold War paranoia with communist China as the new bogeyman, and demonize Marxism through baseless accusations about China committing a “genocide” against the Uyghurs.

“Central to any totalitarian ideology is a constant inquisition against supposedly clandestine and sinister groups held responsible for the country’s demise,” Chris Hedges has written about what America will become like. “Conspiracy theories, which already color Trump’s worldview, will proliferate. The ruling rhetoric will whipsaw the population, swinging from championing individualism and personal freedom to calling for abject subservience to those who claim to speak for the nation and God, from the sanctity of life to advocating the death penalty, unrestrained police violence and militarism, from love and compassion to the fear of being branded a heretic or traitor. A grotesque hypermasculinity will be celebrated. Violence will be held up as the mechanism to cleanse the society and the world of evil. Facts will be erased or altered. Lies will become true. Political language will be cognitive dissonance. The more the country declines, the more the paranoia and collective insanity will grow. All of these elements are present in varying forms within the culture and our failed democracy. They will become pronounced as the country unravels and the disease of totalitarianism spreads.”

While the fascists erase cultures and facts to enforce their own twisted national identities, they’ll continue with their campaigns of imperialist militarism and neoliberal economic shock therapy. We’re experiencing the hollowing out of society’s institutions and culture for the benefit of an ultra-nationalist agenda whose goal is to defend capital at all cost. And the logical conclusion of this is a repeat of the horrors of World War II, where the fascist and imperialist powers slaughtered tens of millions for conquest and capitalist fortification.