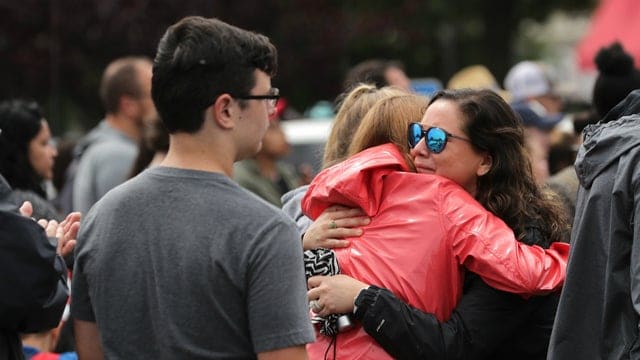 The FBI and Homeland Security continue to investigate the incident with the motive behind this act of violence still unknown.

Virginia Beach Police Chief James Cervera gave few details of what he knew about the mass shooting in the coastal resort city, but said the gunman “immediately and indiscriminately fired upon all the victims” after he entered the municipal building shortly after 4 p.m. local time.

A police officer was among the six injured people, saved by his bullet-proof vest, Cervera said.

“The suspect did shoot a police officer. The officers returned fire. The suspect is deceased,” Cervera said. He did not make clear whether the gunman took his own life or was killed in an exchange of gunfire with police.

According to police, this is the deadliest workplace-related shooting in the U.S. this year. The FBI and Homeland Security continue to investigate the incident and have not yet released their thoughts on the motive behind this act of violence.

However, Cervera said the employee, whose identity has not yet been released, was a longtime public utilities employee.

“This is the most devastating day in the history of Virginia Beach,” Mayor Bobby Dyer said at a news conference with the police chief. “The people involved are our friends, co-workers, neighbors, colleagues.”

In a statement, Virginia Governor Ralph Northam offered his condolences and said, “This is a horrific day for the Commonwealth of Virginia. We are devastated by the tragic shooting in Virginia Beach. I am in Virginia Beach with law enforcement authorities and Mayor Dyer, where I am monitoring the situation and offer the state’s full support.”

“This is unspeakable, senseless violence. I commend local and state law enforcement, first responders, medical teams, and all others who acted swiftly to respond to this situation. My thoughts continue to be with the victims and their families.”