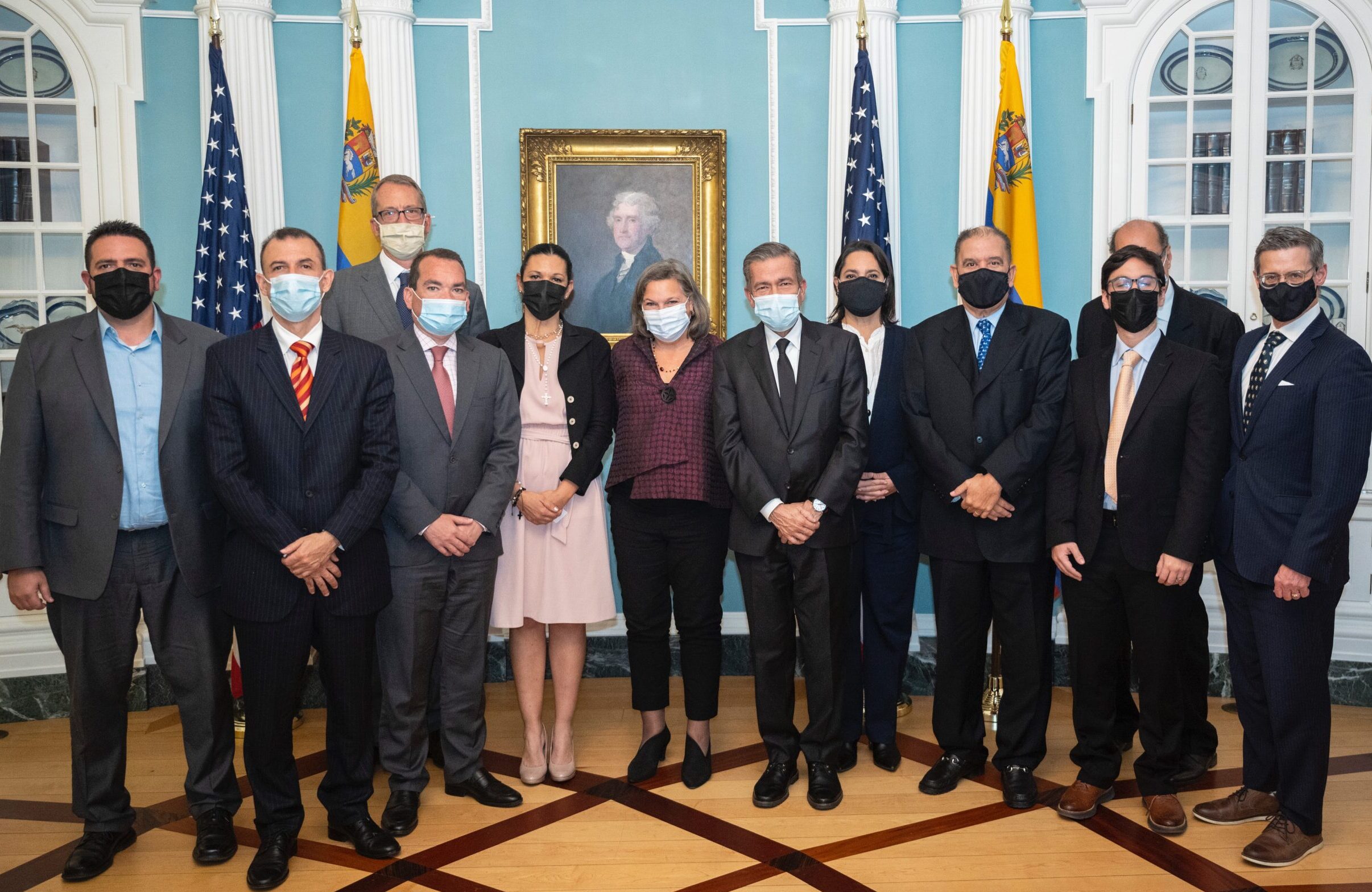 Opposition delegates to the Mexico Talks visiting their political sponsors in Washington. Photo by Twitter / @UnderSecStateP.

On Thursday, December 2, in a new interventionist act, the government of the United States, currently chaired by Joe Biden, urged the administration of President Nicolás Maduro to return to the negotiating table in Mexico with the mediation of Norway.

The individual taking responsibility for this announcement was undersecretary of state for political affairs, Victoria Nuland, after meeting with the delegates of the Unitary Platform and the pseudo-US ambassador to Venezuela James Story. Surprisingly, fake Venezuelan ambassador to the US, Carlos Vecchio, was not in the meeting.

“Met yesterday with Venezuela’s Unitary Platform to reaffirm US support for Venezuelan-led negotiations,” Nuland wrote on her Twitter account. “We stand with the Venezuelan people in their struggle for democracy, and urge the Maduro regime to return to the negotiating table for the benefit of all Venezuelans.”

Met yesterday with Venezuela’s Unitary Platform to reaffirm U.S. support for Venezuelan-led negotiations. We stand with the Venezuelan people in their struggle for democracy, and urge the Maduro regime to return to the negotiating table for the benefit of all Venezuelans. pic.twitter.com/oY7eF3RRaR

The meeting was attended by the coordinator of the opposition delegation, Gerardo Blyde, as well as the rest of the delegation: Freddy Guevara, Tomás Guanipa, Stalin González, Luis Aquiles Moreno, Roberto Enríquez, Mariela Magallanes, Luis Emilio Rondón, and Claudia Nikken.

The negotiation process began in August after several months of negotiations in Venezuela, encouraged by Maduro’s administration and carried out in Mexico with the mediation of Norway. The fourth round of consultations was to be held in October, but shortly before the agreed date, the head of the government delegation, Jorge Rodríguez, announced that Venezuela’s government would suspend their participation in the dialogue following the illegal extraction of Venezuelan diplomat and delegation member Alex Saab to the US, who had been kidnapped for 491 days in Cape Verde.

In this regard, the Venezuelan head of state recently reiterated that at the moment there are conditions are not suitable for the re-establishment of dialogue with the Venezuelan opposition. He stated that the US government must answer for the kidnapping of the Venezuelan diplomat.

“The US government is responsible for torpedoing the dialogue with the opposition,” said Maduro. “The conditions are not in place now to resume the dialogue. When this changes we will announce it to the public.” Many in Venezuela see Washington as the main hindrance to real negotiations between the opposition and the government.