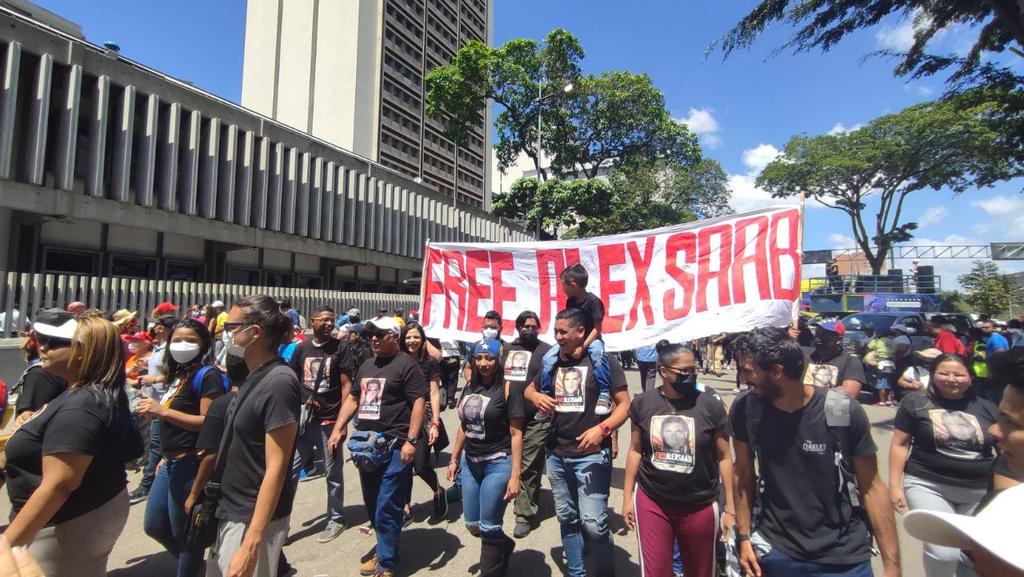 May Day march in Caracas with a contingent of Alex Saab supporters. Photo: Twitter/@machadodz.

Monday, May 2, the 11th Circuit Court of Appeals in Atlanta, Georgia, made public its ruling delaying the decision regarding the diplomatic immunity of Venezuelan ambassador Alex Saab, abducted by the US and imprisoned there since October 2021. The case will return to the hands of Judge Robert Scola, who did not rule out Saab’s diplomatic immunity in the first instance, which could lead to a new appeal by the diplomat’s defense team.

According to a statement from the court of appeals, the district court “did not address whether Saab Moran is immune from prosecution.” Therefore, it declined the invitation from the legal team to “decide that question in the first instance … since we are a court of review, not a court of first instance, and the determination of whether a person is a foreign diplomatic official is a mixed question of fact and law.”

“Here the parties did not have the opportunity to fully develop the record, and the district court did not have the opportunity to weigh the evidence concerning Saab’s claim that he is immune from prosecution because he is a foreign diplomat,” concluded the ruling. “Accordingly, we remand the case to the district court to consider, in the first instance, whether Saab Moran is a foreign diplomat and immune from prosecution.”

According to Saab’s defense team, US jurisdictional bodies clearly colluded to intentionally delay the procedures, as the appeal did not reach the court of second instance with jurisdiction and honor the right to have a second instance examining the claim. Instead, by the doctrine of collateral orders, which was not determined by Judge Scola at the time, the courts tried to prosecute Saab as a regular case, even while they were aware that diplomatic immunity is a procedural exception that makes Saab, as special envoy of Venezuela, immune from prosecution.

Strong arguments
On April 6, Saab’s team of lawyers, headed by David Rivkin, presented oral arguments regarding the diplomatic immunity of the special envoy of Venezuela before the Atlanta appeals court.

Rivkin assured that Alex Saab “cannot be prosecuted or persecuted in any way” because this would affect “the viability of the international system, which requires the absolute inviolability of ambassadors and special envoys.” Rivkin predicted “good results in the recognition of [Saab’s] diplomatic immunity,” and Saab’s “immediate release.”

Saab’s official accreditation by the Venezuelan Foreign Ministry, dated April 9, 2018, allowed Alex Saab “to take steps in favor of the Bolivarian Republic of Venezuela, aimed at guaranteeing the commercial and humanitarian procurement of essential goods and services.” Saab’s accreditation as a diplomat was then duly recognized by the governments of Iran and Russia.