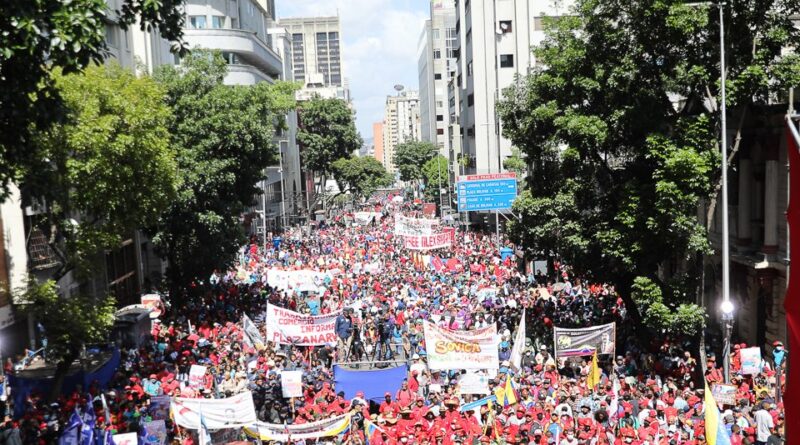 This Sunday, May 1, the day on which Workers’ Day is celebrated in most of the world, a large march took place in the streets of several cities across Venezuela. The one in Caracas was received by President Nicolás Maduro. When the march arrived at Miraflores Palace, the seat of the presidency, the head of state issued a series of pronouncements for the labor sector, including the announcement of a special single payment for retirees, the creation of a tourism system for workers and a digital bank.

In his speech, President Maduro acknowledged that in recent years retirees have been adversely affected by the economic war and the blockade imposed by the United States and the European Union. “There were retirees who left with a miserable payment,” he admitted. He also stated that in the future retirees will receive a “fair and dignified payment for the work accomplished in 30 years.”

“Retired men and women will receive a single repair special payment, for all those who have been retired from January 1, 2018 to May 1, 2022, a single bonus of 10,000 bolívars (equivalent at current exchange rate prices to more than $2,220 USD),” he said. Compensatory measures for workers retired before that time is being evaluated, added President Maduro.

President Maduro explained that the special payments will be issued in three parts, and that Vice President Delcy Rodríguez will offer more details in the coming week.

The head of state stated that 100 tourist destinations have been approved in Venezuela, including Los Roques, Morrocoy, Mochima, the Gran Sabana and the Hotel Humboldt, so that workers can enjoy their spare time.

President Maduro also mentioned that Venezuela will continue with the housing plan for workers, for which he ordered construction to be accelerated to reach five million homes, granting priority to those who are members of unions.

Likewise, he reported on the creation of the Digital Bank for Workers, where the various benefits granted to the working class in petros will be deposited. He asked Vice President Delcy Rodríguez to hold a press conference to inform the country about the details of each of these new benefits that will be established for workers.

It should be noted that President Maduro also insisted on the importance of recovering the workers’ wages, and assured that as assets arrive, the wage tables and the income of the workers’ minimum wage will be adjusted. It will be done “without making a fuss and gradually,” based on the expansion of economic activity and production, he said.

Pending labor laws
Maduro explained that, 10 years after the entry into force of the Organic Law of Workers, there are a series of laws that have remained pending. He instructed Jorge Rodríguez, president of the National Assembly, to begin to comply with the necessary procedures so that in the short term the laws that govern employment in agriculture, transportation; maritime, river and lake navigation; household chores, air transport, and culture, are passed. He set one year as the term within which this legislative debt would be paid.

Special fund for worker enterprises
In addition, the president announced the creation of a special fund for the financing of workers’ entrepreneurship projects, which will begin with a contribution of 100 million bolívars. These resources will be used to fund projects of those workers who want to finance cooperatives or small businesses.

During the event, the president welcomed the presence of the Free Alex Saab movement, highlighting their struggle to demand the release of the Venezuelan diplomat who was abducted by the US government last October 16, without respecting his rights as a diplomatic representative of the Venezuelan government. “Free Alex Saab!” shouted the President.