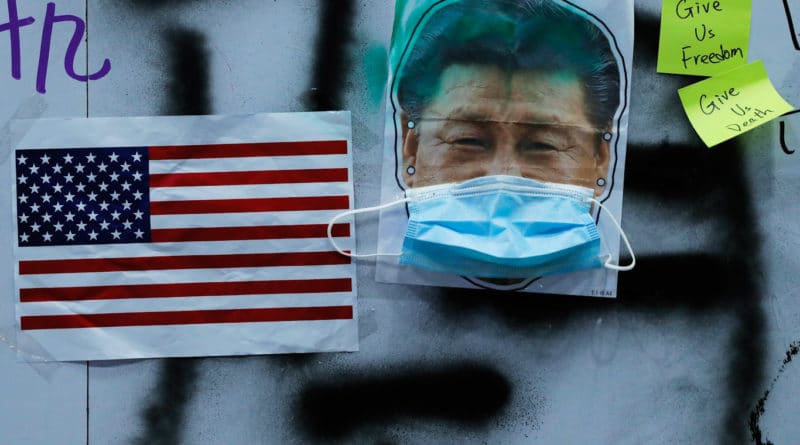 International Opinion
May 18, 2020May 18, 2020 Alan MacLeod anti-china campaign, blame the other to distract, China, smear campaign, US decline, Xi Jinping

Just three years ago, Americans had a neutral view of China (and nine years ago it was strongly favorable). Today, the same polls show that 66 percent of Americans dislike the country.

As the U.S. military turns its attention from the Middle East to conflict with Russia and China, American war planners are advising that the United States greatly expand its own online “psychological operations” against Beijing.

A new report from the Financial Times details how top brass in Washington are strategizing a new Cold War with China, describing it less as World War III and more as “kicking each other under the table.” Last week, General Richard Clarke, head of Special Operations Command, said that the “kill-capture missions” the military conducted in Afghanistan were inappropriate for this new conflict, and Special Operations must move towards cyber influence campaigns instead.

Military analyst David Maxwell, a former Special Ops soldier himself, advocated for a widespread culture war, which would include the Pentagon commissioning what he called “Taiwanese Tom Clancy” novels, intended to demonize China and demoralize its citizens, arguing that Washington should “weaponize” China’s one-child policy by bombarding Chinese people with stories of the wartime deaths of their only children, and therefore, their bloodline.

A not dissimilar tactic was used during the first Cold War against the Soviet Union, where the CIA sponsored a huge network of artists, writers and thinkers to promote liberal and social-democratic critiques of the U.S.S.R., unbeknownst to the public, and, sometimes, even the artists themselves.

Manufacturing consent
In the space of only a few months, the Trump administration has gone from praising China’s response to the COVID-19 pandemic to blaming them for the outbreak, even suggesting they pay reparations for their alleged negligence. Just three years ago, Americans had a neutral view of China (and nine years ago it was strongly favorable). Today, the same polls show that 66 percent of Americans dislike China, with only 26 percent holding a positive opinion of the country. Over four-in-five people essentially support a full-scale economic war with Beijing, something the president threatened to enact last week.

The corporate press is certainly doing their part as well, constantly framing China as an authoritarian threat to the United States, rather than a neutral force or even a potential ally, leading to a surge in anti-Chinese racist attacks at home.

Retooling for an intercontinental war
Although analysts have long warned that the United States gets its “ass handed to it” in hot war simulations with China or even Russia, it is not clear whether this is a sober assessment or a self-serving attempt to increase military spending. In 2002, the U.S. conducted a war game trial invasion of Iraq, where it was catastrophically defeated by Lt. Gen. Paul Van Riper, commanding Iraqi forces, leading to the whole experiment being nixed halfway through. Yet the subsequent invasion was carried out without massive loss of American lives.

The recently published Pentagon budget request for 2021 makes clear that the United States is retooling for a potential intercontinental war with China and/or Russia. It asks for $705 billion to “shift focus from the wars in Iraq and Afghanistan and a greater emphasis on the types of weapons that could be used to confront nuclear giants like Russia and China,” noting that it requires “more advanced high-end weapon systems, which provide increased standoff, enhanced lethality and autonomous targeting for employment against near-peer threats in a more contested environment.” The military has recently received the first batch of low-yield nuclear warheads that experts agree blurs the line between conventional and nuclear conflict, making an all out example of the latter far more likely.

A bipartisan affair
There has been no meaningful pushback from the Democrats. Indeed, Joe Biden’s team has suggested that the United States’ entire industrial policy should revolve around “competing with China” and that their “top priority” is dealing with the supposed threat Beijing poses. The former vice-president has also attacked Trump from the right on China, trying to present him as a tool of Beijing, bringing to mind how Clinton portrayed him in 2016 as a Kremlin asset. (Green Party presidential frontrunner Howie Hawkins has promised to cut the military budget by 75 percent and to unilaterally disarm).

Nevertheless, voices raising concern about a new arms race are few and far between. Veteran deproliferation activist Andrew Feinstein is one exception, saying:

“Our governments spend over 1.75 trillion dollars every year on wars, on weapons, on conflict…If we could deploy that sort of resource to address the coronavirus crisis that we’re currently living through, imagine what else we could be doing. Imagine how we could be fighting the climate crisis, how we could be addressing global poverty, inequality. Our priority should never be war; our priorities need to be public health, the environment, and human well being.”

However, if the government is going to launch a new psychological war against China, it is unlikely antiwar voices like Feinstein’s will feature much in the mainstream press.