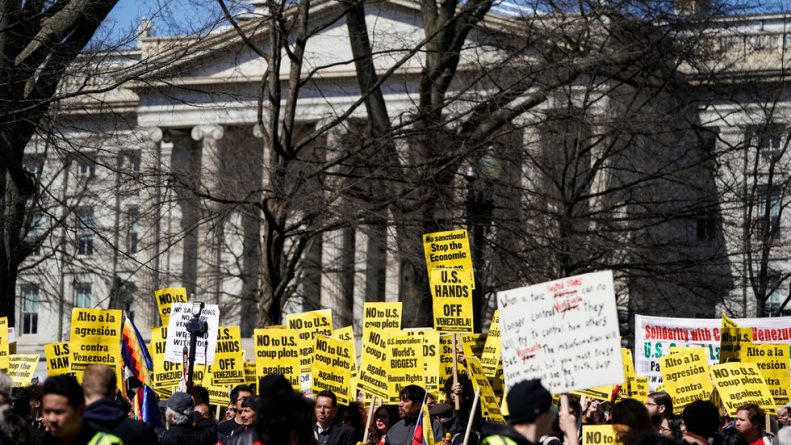 The US Treasury has imposed sanctions on Venezuela’s Economic and Social Development Bank and on four other institutions affiliated with it, calling in its statement for the release of Juan Guaido’s Chief of Staff Roberto Marrero.
While the move came as official US retaliation for Caracas’ targeting the associates of the wannabe president, US Treasury Secretary Steven Mnuchin painted the Bank – known under its Spanish acronym BANDES – as the most vile organization and definitely worth sanctioning.

“The willingness of Maduro’s inner-circle to exploit Venezuela’s institutions knows no bounds. Regime insiders have transformed BANDES and its subsidiaries into vehicles to move funds abroad in an attempt to prop up Maduro,” Mnuchin said in a statement.

On top of that, the official accused Venezuelan authorities of the “kidnapping, torture, and murder of Venezuelan citizens” and urged Caracas to release all “political prisoners,” including Marrero aide to the self-proclaimed president Guaido.

Venezuelan authorities arrested the chief of staff to ‘interim president’ Juan Guaido on Thursday during a raid on a “terrorist cell” that planned attacks on the country’s officials. The government also released images of two rifles allegedly seized by the Venezuelan Bolivarian National Intelligence Service (SEBIN) during the raid on Marrero’s house. Guaido had earlier accused the security forces of ‘planting’ the weapons.

The opposition’s stance on the arrest was supported by the main sponsor of Guaido, the United States, with the National Security Advisor John Bolton calling it a “big mistake” and vowing retaliation earlier on Friday.

BANDES is a Venezuelan federal public company, associated with the Ministry of Finance, which was formed back in 2001. The bank focuses on financing projects, contributing towards development of the country – infrastructure, mass transportation, housing, industry and so on. One of the most notable projects involving BANDES was the launch in 2011 of the Chery Venezuela car factory in cooperation with China.