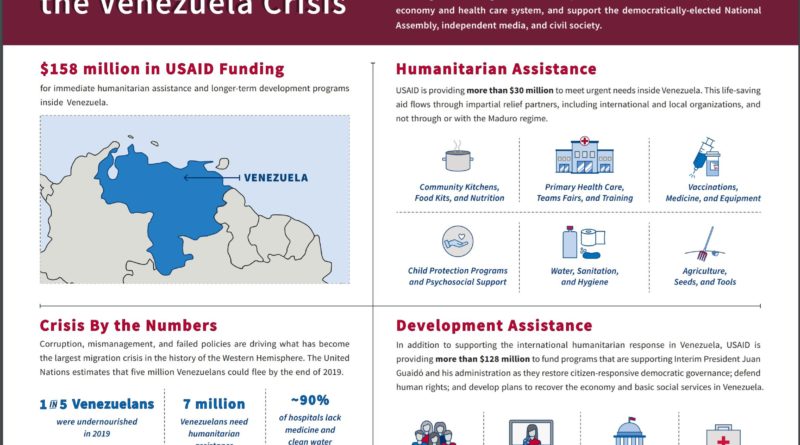 In documents published on its official website , the United States Agency for International Development (USAID, an entity of the US government that receives guidelines from the State Department) admitted having delivered nearly $467 million in “humanitarian and development assistance” for Venezuela, supposedly to address the problems that occurred in the country. $128 million dollars have been delivered to programs proposed directly by Deputy Juan Guaidó, who is considered by the Trump administration to be the supposed “president in charge” of Venezuela.

According to the USAID website , the US government has delivered more than $654 million in what they call “humanitarian and development assistance.” Of that amount, $435 million dollars have been provided by the USAID.

Of that amount, $277 million dollars were given by USAID to support Venezuelans who emigrated to other countries. The money would have been distributed among 16 countries, including Brazil, Colombia, Ecuador and Peru.

In addition, part of this money was used “to help the interim government and the democratically elected National Assembly”, supposedly to support them developing “plans to recover the economy” and implement “social services” in a future and supposed “transition to democracy”.

The other $30 million would have been delivered in “urgent aid programs” within Venezuela, allegedly delivered to “impartial partners” and “local organizations.”

The USAID states that the money is supposedly not directly administered by Guaido, but “is granted competitively to private organizations through contracts, donations or cooperation agreements,” including the private sector, universities, international organizations and NGOs.

However, a usual form of corruption occurs when the private organizations and companies that receive these funds must grant part of them, confidentially, to the people who grant the contracts as “thanks.” This form of corruption, known as “commissions,” is usually very difficult to detect because of the use of frontmen and bank accounts in tax havens.

Additionally, Luis Parra has recently criticized those NGO’s receiving US money as all being subsidiaries of Venezuelan main opposition parties, (AD, VP, PJ, among others).

USAID: interference in other countries
It is necessary to remember that USAID has been the object of harsh criticism in the past, frequently accused of working in collaboration with the CIA or of carrying out its own activities in various scenarios, such as the destabilization of governments not aligned with the policies of the United States.

For these reasons, USAID was expelled from Bolivia in 2013, on the instructions of then President Evo Morales, who accused it of interference in internal political affairs. “Those institutions (…) where they arrive with their resources, blackmail the communities to [create confrontations among] communities. I know how some non-governmental organizations manage the foundations, at the service of the empire,” Morales said in an interview.

In September 2012, Russia also ended the work of the USAID in its territory, where the agency invested about $2.7 billion dollars in the last two decades.

Other US resources managed by Guaidó
The information on the resources that USAID granted to Guaidó was disclosed by the journalist Fania Rodrigues in an article in the Brazilian newspaper Diario Do Centro Do Mondo , and also on her Twitter account.

In her article, the journalist recalls that Guaidó also manages the profits of two Venezuelan state companies abroad: Citgo , which is a subsidiary of the Venezuelan oil company PDVSA in the United States, and Monomeros, a fertilizer company located in Colombia. “After the economic blockade imposed against the Maduro government, these companies were [taken under the control of] the US and Colombian governments,” Rodrigues recalls.

“With this, the assets now in control of a team designated by Juan Guaidó, recognized by these countries as interim president of Venezuela,” she explained.

“For 2020, resources are already guaranteed,” Rodrigues said in her article. US government announced in December 2019 that Congress approved $400 million dollars, which will supposedly go to “humanitarian assistance in Venezuela and neighboring countries that receive Venezuelan immigrants, without stipulating how much is allocated for each country.” Another $17 million was also approved for “democratic political actors and for Venezuelan civil society organizations.”