By US Palestinian Community Network (USPCN)

A pioneer in the movement for Palestine solidarity in the U.S., Richard “Dick” Reilly passed away of complications from lung cancer on the evening of Tuesday, February 11th, 2020, in his Chicago apartment. He was 67 years old.

Known across the U.S., and even internationally, as one of the core leaders of national formations like the November 29th Coalition and the Palestine Solidarity Committee, Dick dedicated over 40 years of his life to supporting our fight for the liberation of Palestine.

The working class son of Scott Reilly and Catherine Freeman, he gravitated as a young man to join the struggle for workers’ and oppressed people’s rights by organizing for a period with the Industrial Workers of the World. Soon thereafter, he was introduced to the Arab Community Center (commonly known as the Markaz, “Center” in Arabic) and began his lifelong activist passion.

Last year, USPCN organized an important event, a debka performance by Wishah, one of the top troupes in the Arab World, and there we explained why our institution is a legacy of the Markaz. The solidarity organizations Dick helped found, worked with, and inspired also had the same political affinity with the Markaz, and today’s Palestine solidarity movement is one of his own powerful legacies. 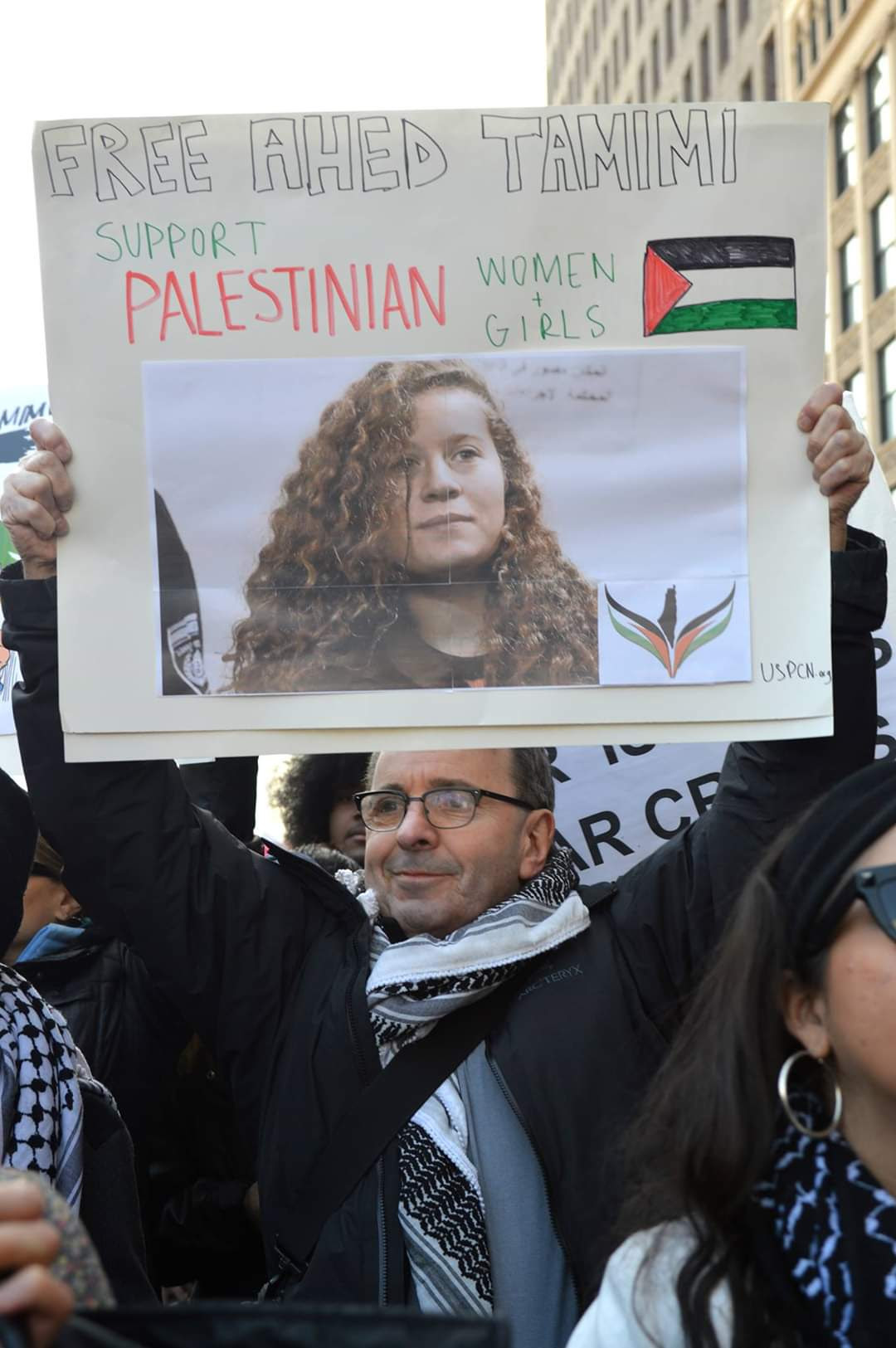 From his base in Chicago, Dick was the Midwest Coordinator and National Executive Committee member of the Palestine Solidarity Committee (PSC), a vibrant group that organized direct action protests, rallies, press work, and educational presentations in communities across the country from the 1980s through the early 1990s, an intense era that saw the Israeli war on Lebanon in 1982 and what is popularly called the First Palestinian Intifada, or Uprising, which began in December of 1987.

One year into the Intifada, Dick helped lead a delegation to Palestine, where he was arrested while participating in a protest commemorating the 1982 Israeli-supported massacre of hundreds of Palestinians in the Sabra and Shatilla refugee camps of Beirut. He was one of seven activists deported by the Israelis back to the U.S.

Although he was never able to visit Palestine again, his work with PSC continued unabated, and his relationship with Palestinians in Chicago and across the U.S. grew even stronger. The PSC organized side by side with the Markaz on a number of important projects, including Palestinian political prisoners’ rights campaigns and concerts for Palestine that were headlined by Black liberation artist Gil Scott-Heron and progressive singer-songwriter Kris Kristofferson, respectively.

There is a common misconception that intersectionality in the Palestine support movement is a new phenomenon, that today’s U.S. Palestinian community and its supporters only recently began relating to other oppressed and marginalized communities. But in reality, Palestinians, PSC, and Dick had deep ties with the most important progressive movements in the 1980s, supporting community organizing in solidarity with the people of El Salvador, Guatemala, Nicaragua, Mexico, South Africa, Puerto Rico, and others; with Black people, Native people, Asians, and Chicanos in the U.S.; and with workers’ rights, women’s rights, environmental rights, and other social justice organizations.

PSC worked with the Markaz to help elect Harold Washington, Chicago’s first Black mayor, and supported the Rainbow Coalition and Rev. Jesse Jackson’s bid for U.S. President, which played a role in prompting Jackson to add support for Palestinian statehood in his platform. USPCN and other Palestinian institutions owe an enormous debt of gratitude to the Markaz, other Palestinian elders across the country, and PSC leaders like Dick Reilly for today’s strong relationships and alliances with many social justice and liberation movements in the U.S.

When the Second Intifada broke out in Palestine in 2000, when the Lebanese resistance ended Israel’s occupation of its land in 2006, and when Israel attacked Gaza numerous times, especially in 2008-9, 2012, 2014, and Land Day 2018 (when the #GreatReturnMarch began), Dick was again supporting our community and leading solidarity efforts – this time organizing with, advising, and mentoring a whole new generation of Palestinians.

He and his wonderful life partner, 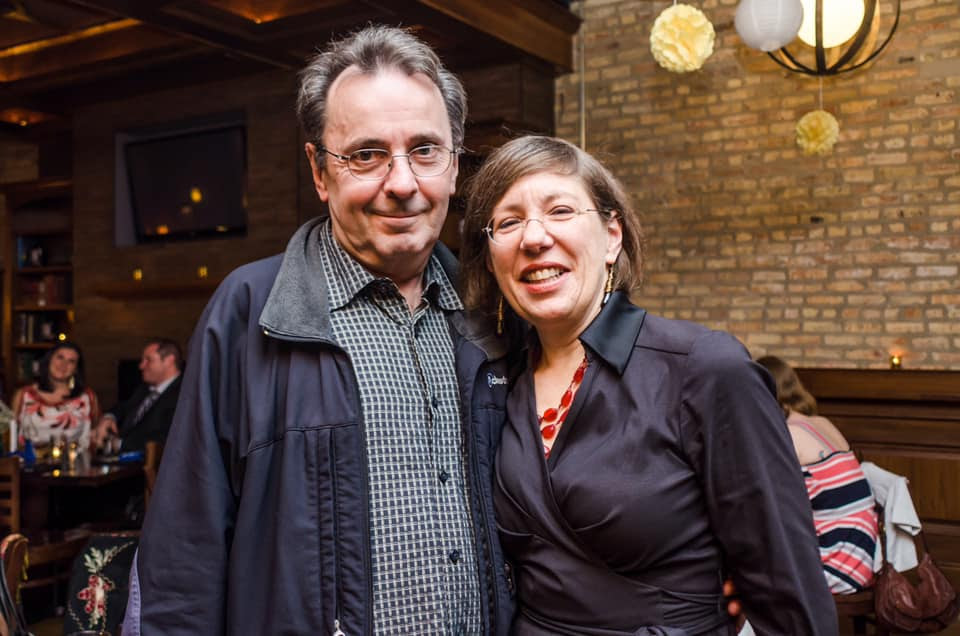 Christine Geovanis, a leading organizer and solidarity activist in her own right, provided much of the press work for USPCN’s organizing at that time – through HammerHard MediaWorks, a labor of love they established with others to support institutions like ours that lacked communications capacity.

A new anti-war movement in the U.S. was established after the attacks of September 11th, and of course Dick was there too, assuming leadership in the Chicago Coalition Against War and Racism, and helping in 2001 to found Chicago Action Medical, an organization of medics, nurses, and activists who provide healthcare to anti-war and other protesters across the city. He was a psychiatric social and crisis worker at Northwestern Hospital, and of course he also helped organize healthcare workers in Chicago.

He played a major role in supporting Palestinians in the U.S. who were again being challenged by the mainstream anti-war movement to decenter Palestine from the work. The argument, of course, like it had been ever since the 1967 occupation, was that the question of Palestine divides social justice movements in the U.S. because of “soft zionist” participation, and occasional leadership, in them.

But we did not budge. The zionists in the anti-war movement who claimed that it would be a tactical mistake to connect Israel with the war on Afghanistan or the impending war on Iraq were isolated, and Dick stood shoulder-to-shoulder with us when we won that battle, leading to the largest national protest specifically for Palestinian rights in the history of the U.S. – 80,000 people marching in DC in response to heroic Palestinian resistance to another Israeli massacre in the Jenin refugee camp in 2002.

Dick was also an extremely close friend to Rasmea Odeh, the Palestinian American organizer who was forced from the U.S. after being wrongfully convicted on an immigration charge in 2017. They had known each other for decades, and he worked on her communications team, strategizing with leaders of the Rasmea Defense Committee to help nullify the jury (without success, unfortunately) in her case. She was shattered to hear of his passing.

USPCN and a number of its members across the country learned a ton from Dick Reilly over the years, but he was also a great listener and learner himself. Christine and he would always ask us for their “marching orders,” because they were the truest of solidarity organizers. Dick understood fully the concept of self-determination and knew that the leadership of any national liberation movement must come from the oppressed nation itself.

He participated in the discussions and the debates with the old Markaz crew back in the day and with the Palestinian and Arab leaders of today’s movement in the U.S., and he offered his insight and opinions (wow, did he have opinions!), but when the decisions were made and handed down, he followed the line of march.

We loved him for this discipline and for his steadfast commitment, always, to the Palestinian thawabet (the “constants”) – our right to Return, to self-determination, to resist Israeli zionist occupation and colonization and U.S. imperialism, and to liberation in an independent state on all of historical Palestine, with Jerusalem as its capital. 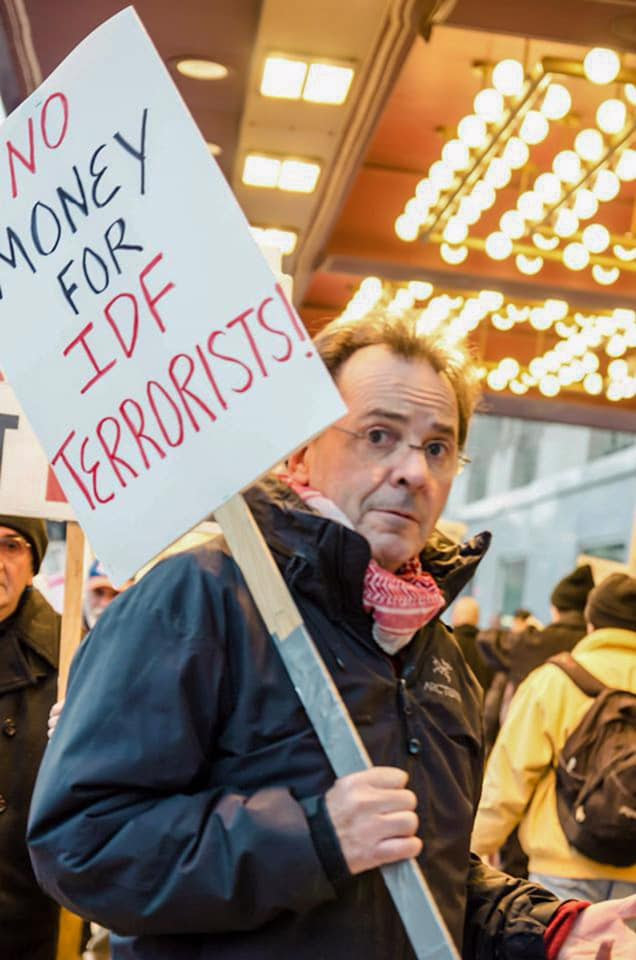 And so, Dick Reilly, after 40+ years of your commitment to us Palestinians, it is time for us to make a commitment of our own: we pledge to the proud Irish Republican our solidarity with you – that we won’t rest until your people are truly liberated in a united Ireland, “when they own everything from the plough to the stars,” as one of your heroes, James Connolly, once proclaimed.

And we also pledge that there will be no rest until your beloved Palestine is free “From the River to the Sea”!

Dick Reilly is survived by his sisters Susan and Molina, his brother Lance, and his life partner Christine Geovanis. Private condolences can be sent to Christine at chrisgeovanis@gmail.com.

The funeral is Tuesday, February 18th, with a 10:30 AM service at Cooney Funeral Home, followed by a funeral procession to the interment at Forest Home Cemetery, located at 863 Des Plaines Ave., in Forest Park, Illinois. For more information, please call 773-588-5850 or visit www.cooneyfuneralhome.com.

Contributions in Dick Reilly’s name are being accepted by the Middle East Children’s Alliance. A GoFundMe page has been established to assist with raising money to cover his medical expenses.