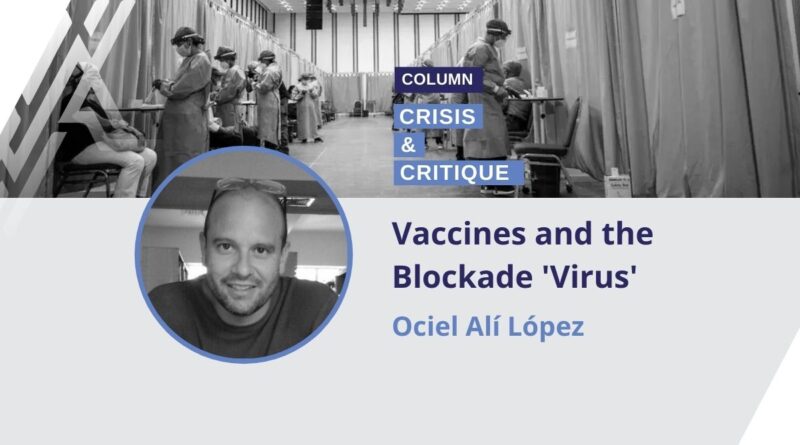 VA columnist Ociel López looks at some of the consequences of the recent payment block of Venezuela’s COVAX vaccine purchase.

Héctor Constant Rosales, Venezuela’s ambassador to the United Nations, received a letter from the World Health Organization’s COVAX program on June 7. The letter explained that the Swiss bank UBS had blocked and is investigating four of the 16 transactions made by the Venezuelan government to purchase vaccines. US-led sanctions were blamed for the move, which will bring an even greater delay to Venezuela’s vaccine rollout.

Sanctions officially aim to “pressure” the Nicolás Maduro government. However, in this case and beyond the perverse effect the policy has on the general population, they also represent a blow to Venezuela’s opposition. The payment block will especially damage the opposition’s radical wing led by Juan Guaidó, which has not only encouraged the sanctions regime but made a big stir about the vaccine shortage. Now, it all seems to be coming back at them like a boomerang.

The news marks a turning point because it forces opposition parties and leaders to engage with the impact of the financial blockade on Venezuelans, as well as the obvious political responsibility they hold for it.

Perhaps it is for this reason that Guaidó has incorporated internationally-managed sanction relief into his discourse. The opposition leader recently mentioned that a commission chaired by Gerardo Blyde will visit Washington and Brussels to push for a “conditional” lifting of sanctions in exchange for government concessions.

Guaidó has attempted to attenuate his discursive shift by talking about “conditioned relief,” with which he tries to explain his new stance: a 180-degree change of position compared to the previous “cessation of usurpation” mantra that became his karma.

The defense and justification of sanctions maintained by a good part of the opposition may turn out to be toxic rhetoric in the upcoming electoral campaign. Campaigning begins in a few weeks and will culminate on November 21 with the so-called mega-elections [where regional and local authorities will be elected].

While military regime change scenarios through a coup or external intervention have been cast aside, the opposition is now discussingparticipating in the elections. This shift leaves the main political leaders and sanction instigators handicapped as the damage of the blockade becomes increasingly evident in areas such as vehicle fuel and now vaccines.

For the ruling party, the blockade is the “irrefutable” proof that it needs to go to elections and blame the opposition ‒ especially Guaidó ‒ for the long queues to buy diesel and the slow vaccination process.

When compared to other countries in the region, Venezuela’s handling of the pandemic gave some political capital to the government and exposed the fantasy that is Guaidó’s interim government. Keeping the situation under control and eventually moving forward with vaccinations will bring undisputed longer-term victories for Maduro.

The COVAX payment block is a financial attack associated more with hawks than doves in Washington. The new US administration remains attached to the Trump line regarding Venezuela while the European Union seeks conciliatory positions and the left gains ground in Latin America.

Sanctions are an issue that dents the US Congress’s bicameral unity on Venezuela. While Congress initially unanimously backed Guaidó’s interim government, it now shows cracks with new actors coming to the fore and an attempt to apply a new approach.

Meanwhile, the people of Venezuela are hit by tightening sanctions amid a new Covid-19 wave, and insufficient vaccines are in sight.

The vaccination panorama
Venezuela has lagged behind other countries on the issue of vaccines. According to a study by Venezuelan journalist Jessica Dos Santos in May, Venezuela is second to last in Latin America in terms of vaccination, only surpassing Honduras.

The country has begun mass vaccination, but has only 2,680,000 Sputnik V and Sinopharm doses purchased from Russia and China. This guarantees vaccines for only 5% of the population.

In this context, the COVAX mechanism is the best hope for a rapid and economical vaccine rollout as the country would acquire 11.3 million vaccines in a relatively short time. With the Johnson & Johnson single dose vaccine which doesn’t require a cold chain distribution potentially arriving, the process may be able to move forward more quickly.

Other international grievances
The Swiss bank’s COVAX payment blockade is not the only obstacle Venezuela faces in the context of the pandemic.

Venezuela continues to wait for the ruling of England’s High Court regarding the proposal that the more than one billion dollars in gold bars held in the country be transferred to and managed by the United Nations Development Program to supply equipment and medicine to counter the pandemic. On October 5, 2020, a court annulled the ruling granting Guaidó’s interim administration access to the resources, which remain in limbo.

A financial blockade against efforts to acquire diesel is deepening as well. This policy was bequeathed by the Trump administration in its final weeks and is generating a calamitous situation in Venezuela. The situation is very difficult to justify for the opposition.

Thus, the Republican sanctions architecture remains at its zenith. This negatively impacts the population and now the electoral chances of the very opposition that backed it.

Will this situation change as we go further into the Democrat administration, and as Europe starts looking for new policy positions? Will the vaccine block be the straw that breaks the camel’s back?

Featured image: What are the implications of Venezuela seeing its COVAX payments blocked? Ociel López analyzes in his latest column. (Venezuelanalysis / AFP)