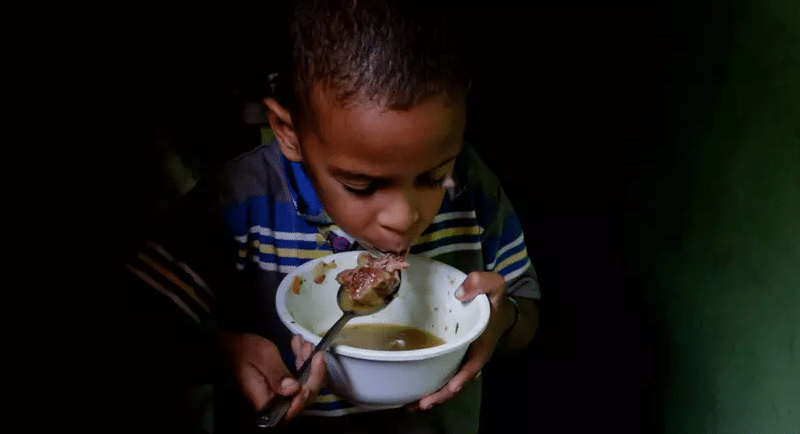 “The terrible suffering and death that Venezuela has experienced in recent years is overwhelmingly a result of economic collapse and deprivation caused by U.S. sanctions.”

Advocates for more a more humane U.S. foreign policy are urging President Joe Biden to embrace Rep. Jim McGovern’s call for an end to “all secondary and sectoral sanctions imposed on Venezuela by the Trump administration.”

“If something is a war crime when people are shooting and dropping bombs, it is an equally serious crime when there is technically no war taking place.”
—Mark Weisbrot, CEPR

In a letter sent to Biden on Monday, McGovern (D-Mass.), chair of the powerful House Rules Committee, cited estimates that more than seven million Venezuelans are “in need of humanitarian assistance,” and that the nation’s poverty rate surged “from 48% in 2014 to 96% in 2019, with 80% in extreme poverty.”

“While U.S. officials debate the sanctions policy in Washington, for people in Venezuela the ongoing crisis is a life-and-death matter,” McGovern wrote.

Under former President Donald Trump, who sought to topple the elected government of Venezuelan President Nicolás Maduro, the U.S. in August 2017 began to unilaterally impose sanctions on Venezuela in violation of international law as well as the charter of the Organization of American States and other international treaties the U.S. has signed.

While Trump’s attempt to force a regime change in the South American country ultimately failed, U.S. economic sanctions “killed tens of thousands of Venezuelans in just their first year (2017–18), and almost certainly tens of thousands more since then,” according to the Center for Economic and Policy Research (CEPR), a progressive think tank based in D.C.

“There is no longer any way to hide the fact, which every economist knows, that the terrible suffering and death that Venezuela has experienced in recent years is overwhelmingly a result of economic collapse and deprivation caused by U.S. sanctions,” CEPR co-director Mark Weisbrot said Tuesday in a statement.

RELATED CONTENT: The Numbers Prove it: Venezuela has Lost 99% of Income due to Inhuman Blockade

A very big change from Congressional leadership. McGovern is Chair of the powerful Rules Committee. He is telling the ugly truth, and for the first time demanding an end to the US sanctions that have killed tens of thousands, & probably more, Venezuelans. Worth reading it all. https://t.co/aF94EgKVz3

The International Monetary Fund has estimated that Venezuela’s GDP per person has decreased by 72% since 2015, CEPR noted, adding that “a collapse of this magnitude is practically unprecedented, even during some of the most destructive wars.”

“Under the Geneva and Hague conventions, to which the U.S. is a signatory, these sanctions would be considered collective punishment, and therefore a war crime, if committed during a war,” the organization pointed out.

Weisbrot stressed that “if something is a war crime when people are shooting and dropping bombs, it is an equally serious crime when there is technically no war taking place.”

In his letter to the White House, McGovern wrote, “Although U.S. officials regularly say that the sanctions target the government and not the people, the whole point of a ‘maximum pressure’ campaign is to increase the economic cost to Venezuela of failing to comply with conditions the U.S. imposes.”

“Economic pain is the means by which the sanctions are supposed to work,” McGovern continued. “But it is not Venezuelan officials who suffer the costs. It is the Venezuelan people.”

“As a member of Congress, I have been a strong defender of the premise that human rights should be at the center of our foreign policy,” said the lawmaker. “I have never believed that sanctions should be used to punish whole populations for the actions of their leaders or to bludgeon an adversary into submission.”

“I believe sanctions like those the previous administration imposed on Venezuela are both misguided and immoral,” he added. “I believe it is time for a course-correction on U.S. policy toward Venezuela. It is time to stop using the well-being of the Venezuelan people as a bargaining chip.”

Applauding the high-ranking House Democrat for his leadership on the issue, Weisbrot said Tuesday that “more Democrats in Congress should join with McGovern, and demand that President Biden end this suffering and death caused by the Trump sanctions.”

During Monday’s NATO summit, Weisbrot noted, the U.S. led and signed a communique that says, “We are committed to the rules-based international order.”

In response, Weisbrot emphasized that “there can be no rules-based international order when one nation—in violation of its treaty obligations—can unilaterally destroy the economy of another, with immense human cost.”