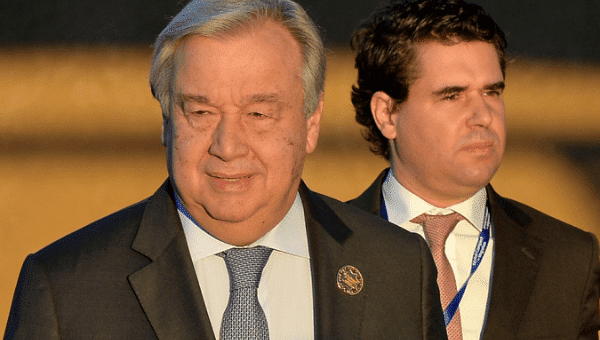 United Nations Secretary-General Antonio Guterres began the Global Compact for Safe, Orderly and Regular Migration by thanking the over 150 government representatives present for the “fantastic miracle” of making the two-day summit a reality. He asked world leaders “to breathe life” into the migration pact signed by those gathered “to demonstrate its utility.”

Over 70 Migrants Released After Detention By Mexican Migration

The migration pact, drafted in July, was signed on Monday at the two-day U.N. migration summit in Marrakesh, Morocco with the aim to reduce irregular migration, integrate migrants into new countries and provide their safe return home, according to the international organization.

Guterres said that migration is “one of the most pressing global challenges of our times.”

He told the international leaders at the summit that “a cooperative approach … grounded in the principles of state sovereignty, responsibility-sharing, non-discrimination, and human rights” are critical to “migration policies” moving forward.

The 40-page document is the first-ever internationally “negotiated agreement to cover all dimensions of international migration in a holistic and comprehensive manner,” says a U.N. statement. It has been rejected by several right-wing governments including the United States, Isreal, Hungary and most recently by Italy, Chile and Belgium. The U.S. and Italian governments have made a regular practice of illegally denying asylum applicants.

Guterres said that countries not signing the pact don’t understand its content and are relying on “false” information to make their decision.

Venezuela’s foreign minister Jorge Arreaza was present at the Morocco summit. President Nicolas Maduro has already implemented components of the pact with his Return to the Homeland Plan that has repatriated over 10,000 Venezuelans over the past several months.

According to the 2017 International Migration Report world migration rose from 173 million in 2000 to 220 million in 2010, then 258 million in 2017. Most migration stems from the overwhelming effects of violence, poverty and climate change in peoples’ home countries.

“Migration should never be the result of despair, but when it is, we must cooperate to respond to the needs of migrants in situations of vulnerability and to face the challenges,” said Guterres during a Monday speech to summit participants. The U.N. leader added: “We must work together to create conditions that allow communities and people living with security and dignity in their own country.”

Guterres told the leaders present that “developed” economies need migration to supply work and young people because these countries are aging and have lower birth rates.

“There is no doubt that migration has very different and sometimes unpredictable effects on our countries and communities and on migrants and their families.” But “it is crucial that the challenges and opportunities of international migration are something that unites us, rather than dividing us,” stressed Guterres.

The United Nations Network on Migration program was also announced and is set to begin to support members states for a more humane management of international migration.