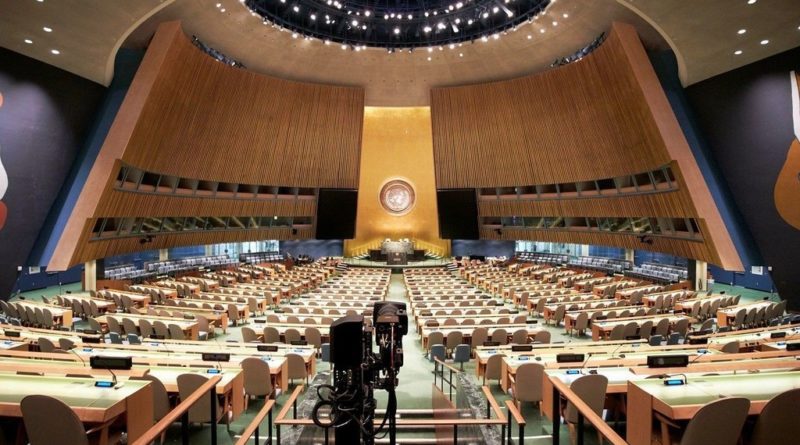 Venezuela, which has one of the highest UN contribution rates in the region, has not paid its dues since 2018.

Mérida, January 13, 2020 (venezuelanalysis.com) – Venezuela has had its voting rights at the United Nations (UN) General Assembly suspended due to unpaid financial contributions.

Venezuela is required to pay US $21.8 million a year to the UN’s budget, but no payments have been reported since 2018.

Article 19 of the UN Charter states that “a member of the United Nations which is in arrears in the payment of its financial contributions to the Organization shall have no vote in the General Assembly if the amount of its arrears equals or exceeds the amount of the contributions due from it for the preceding two full years.”

The same article does, however, allow for some flexibility in the application of the sanction when the General Assembly is “satisfied that the failure to pay is due to conditions beyond the control of the Member.”

Despite financial problems, the Comoros Island, Sao Tome and Principe Island and Somalia all retained their voting rights in October 2019.

Venezuela’s voting rights in other UN entities, including the Human Rights Council, are expected to remain unchanged.

In response, Venezuela’s Foreign Minister Jorge Arreaza has pointed the finger at US-led financial sanctions, without offering a payment schedule to revert the measure or providing evidence of efforts to make the payment since 2018.

According to the minister, “the US financial blockade has closed financial routes through which the Venezuelan state may honour its commitments.”

The top diplomat went on to declare that the US sanctions regime “openly violates international law,” and that UN Secretary General Antonio Guterres was made aware of the payment problem “some months ago.”

Arreaza also called on the UN to “guarantee” Venezuela’s vote at the next General Assembly, scheduled for September this year.

Since 2017, the Caribbean country has been subject to US financial sanctions, including a financial crimes enforcement directive advising international financial institutions to block “suspicious transactions” by Venezuelan state entities. Sanctions were deepened in 2019 with direct measures against the Venezuelan Central Bank and other state banks, alongside punishing new oil sanctions.

A wide-reaching embargo announced in August 2019 also prohibits US entities and foreign third parties, including banks, from dealing with any Venezuelan state bodies or those deemed to have “materially assisted, sponsored, or provided financial, material, or technological support for, or goods or services” to the Venezuelan government.

Venezuela is obligated to contribute 0.728 percent of the UN’s total US $3 billion budget, one of the highest percentage contribution rates in Latin America. Only Brazil and Argentina pay more to the international body.

According to a 2018 resolution, UN contribution rates are calculated based on factors including Gross National Project (GNP) estimates, exchange rates, and debt burden.

Featured image: Unless it makes good on payment, Venezuela will forfeit its right to vote at the next UN General Assembly in September 2020. (IC)
Source URL: Venezuelanalysis.com