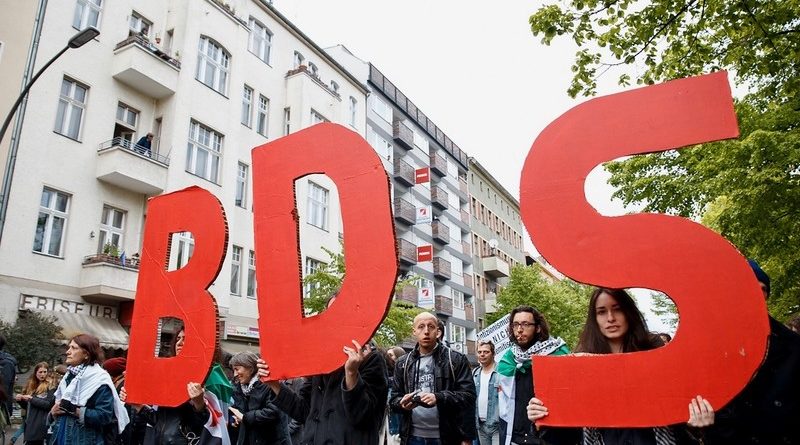 UN experts have warned the German government that its tightening crackdown on supporters of Palestinian rights violates freedom of expression.

It was made public last month after the German government failed to respond.

The independent UN experts expressed concern that a resolution passed last May by the Bundestag, Germany’s lower house, attacking BDS – the boycott, divestment and sanctions movement for Palestinian rights – imposes “undue restrictions to the rights to freedom of opinion and expression, peaceful assembly and of association.”

The nonbinding resolution urges German institutions and public authorities to deny funding and facilities to civil society groups that support the nonviolent BDS movement to hold Israel accountable for decades of military occupation, war crimes and human rights violations against millions of Palestnians.

Yet the resolution has already set the stage for smear campaigns and official repression of artists, journalists and even the head of Berlin’s Jewish museum who have expressed solidarity for Palestinians or support for freedom of speech.

These developments appear already to have vindicated the concern expressed by the independent UN experts that the resolution “may hinder the peaceful activities of human rights defenders, groups and organizations denouncing human rights violations as part of the BDS movement by shrinking the civic space available to them to express legitimate grievances.”

The UN special rapporteurs ask the German government to explain how the anti-BDS resolution complies with Germany’s international obligations to protect freedom of expression so that human rights defenders “are able to carry out their legitimate work in a safe and enabling environment, and without undue restrictions.”

The German government’s apparent failure to respond is not an encouraging sign.

Publication cleared of “anti-Semitism” accusation
But it is not all bad news in Germany for supporters of basic democratic and human rights.

The UN rapporteurs say they “are encouraged by recent regional court decisions” in Germany since the Bundestag resolution, “that have ruled in favor of groups or organizations excluded from cultural events on grounds of their support for the BDS movement.”

And in December, the German press council unanimously concluded that accusations against a major weekly were unfounded.

Der Spiegel had published a major investigation into the activities of Israel lobby groups in the Bundestag.

The magazine assigned six journalists to investigate the influence of pro-Israel groups on the passage of the anti-BDS resolution in Germany.

In July, it published an extensive report exposing the influence of two German pro-Israel lobby groups.

The article sparked a fierce debate in the media.

He accused the authors of using “anti-Semitic clichés like that of the all-powerful Jewish world conspiracy.”

A citizen filed a complaint with the press council claiming that the “entire text” of the article used anti-Semitic tropes, and that its authors demonstrated an “affinity for anti-Semitic stereotypes.”

But “there was no violation of the journalistic duty of care,” the council’s committee of eight representatives of journalists, newspaper associations and trade unions concluded.

“The complainant’s assessment that the article was based on a preconceived intention with clearly anti-Semitic tendencies is incomprehensible to the committee,” the body stated.

Der Spiegel’s reporting cast light on the lobbying activities of Elio Adler, chair of the Wertelnitiative, or Values Initiative.

In the months before the vote, Adler’s group campaigned to classify the BDS movement as anti-Semitic and to ban its funding.

One German member of parliament accused the group of “systematic influence.”

Adler was also a board member of a group known as Naffo that promoted the positions of Israeli Prime Minister Benjamin Netanyahu.

According to Der Spiegel, both groups used “highly questionable” methods to sway German policymakers. These included organizing roundtables and drafting position papers for friendly lawmakers known inside the lobby groups as “contact MPs.”

The groups would also organize junkets to Israel for lawmakers and even arrange donations to politicians. Der Spiegel questioned the independence of politicians who benefitted from such activities.

Despite the effort to portray such reportage as anti-Jewish bigotry, the press council concluded that Der Spiegel’s reporting was factual.

The weekly’s investigation indicates that the Israel lobby campaign in Germany employs tactics reminiscent of those used to gain influence in the UK and the US, as revealed by Al Jazeera’s recent undercover documentaries.

Immediately after the Bundestag adopted the anti-BDS resolution in May, Israel praised the motion for drawing entirely bogus and defamatory “similarities between the boycott of Jewish businesses during Nazi rule and the boycott of Israel.”

Gilad Erdan, Israel’s strategic affairs minister, applauded the German resolution as “an important step in the war against the boycott.”

Erdan has taken credit on Israel’s behalf for the passage of anti-BDS measures in more than two dozen US states.

The ministry pays Israeli newspapers to publish anti-BDS and anti-Palestinian propaganda and “prides itself on having created a ‘network’ of domestic and international organizations to implement its policies,” according to the independent Israeli publication The Seventh Eye.

Austria follows Germany
Despite criticism and setbacks, Israel and its lobby groups are charging ahead with efforts to muzzle Europeans who object to the systematic mistreatment of Palestinians.

This month, Austria’s parliament is set to vote on a resolution similar to the German one: It equates BDS with anti-Semitism and calls for groups that support the campaign or “question Israel’s to exist” to be denied funding and venues.

Parties across the political spectrum, including the neo-Nazi Freedom Party and the ostensibly leftist Social Democrats, have united to back the resolution, which is expected to pass.

Earlier this month, dozens of Palestinian civil society organizations wrote Austrian lawmakers urging them not to back the measure.

“We commend all genuine and serious efforts to combat anti-Semitism because, like you, we reject anti-Semitism as one of the most harmful forms of racism, especially in the light of rising anti-Jewish bigotry and hate crimes across Europe,” the groups said in a statement.

But they say that the Austrian resolution – like measures in many other countries – is “based on a fraudulent definition of anti-Semitism that conflates peaceful protest against Israel’s war crimes and human rights abuses with anti-Semitism.”

Even without a resolution in the national parliament, human rights defenders in Austria already face mounting censorship for expressing support for Palestinian rights.