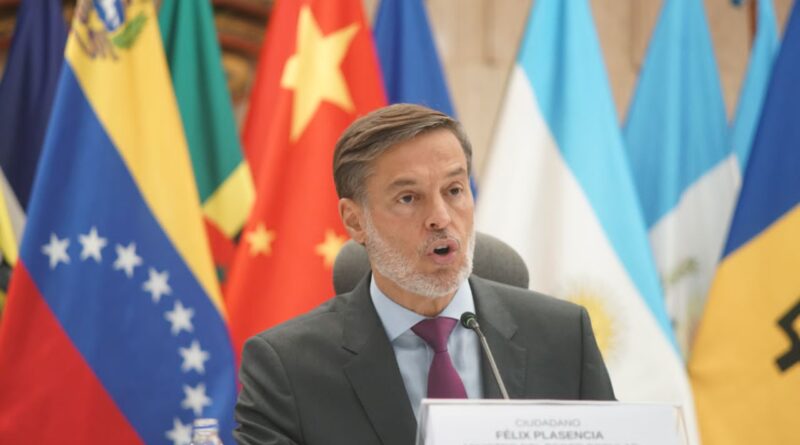 This Friday, January 7, in his speech at the 22nd Summit of Ministers of Foreign Affairs of the Community of Latin American and Caribbean States (CELAC), in Argentina, the Foreign Affairs Minister of Venezuela, Félix Plasencia, called upon all CELAC members to join forces against the blockade on Venezuela and other nations in the midst of the COVID-19 pandemic.

He pointed out that Venezuela has continued to be a victim, for more than a decade, of unilateral coercive measures, wrongfully called sanctions, imposed by the US and the European Union, and insisted on the importance of putting an end to them.

RELATED CONTENT: AMLO Reiterates His Proposal for Assange’s Asylum to Mexico as Extradition to the US Looms

“Once again we call upon the member states of CELAC to join forces to denounce the unilateral coercive measures,” said Plasencia in his speech. “It is incomprehensible that at this time in the global situation of the pandemic there is a tightening of unilateral sanctions and blockade against sister nations.”

He also thanked Argentina, Mexico and Cuba for the cooperation in health matters provided during this COVID-19 pandemic with the supply of vaccines to many countries in the region.

Finally, Plasencia urged for the creation of the General Secretariat of CELAC, to consolidate the region and combat threats to peace and the persecution of democratic governments, and stressed on strengthening ties with countries such as China, Russia and India and organizations such as the African Union, in favor of international integration and interregional cooperation.

In his speech, Plasencia also pointed out that with the COVID-19 pandemic, inequalities that were already present in society were accentuated, and for that reason it is important to strengthen multilateralism, given that there are other threats to peace.

“It is time to strengthen multilateralism,” he asserted. “We reiterate that other threats to peace and stability of our nations and the well-being of its inhabitants persist; therefore, it is important to continue defending the norms of this international principle.”