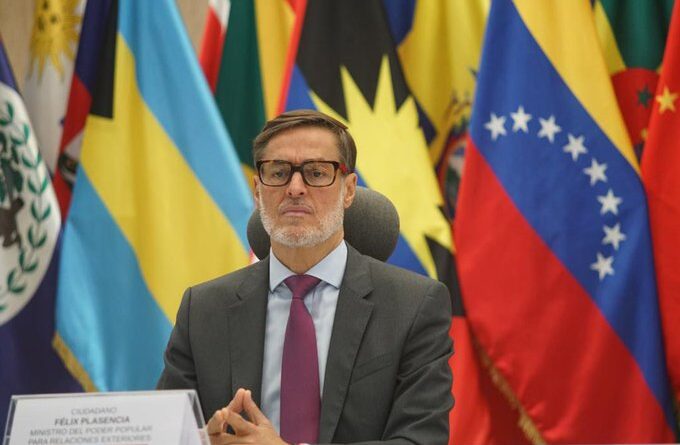 During his speech at the Third Meeting of Ministers of the CELAC-China Forum this Friday, December 3, Plasencia highlighted the Asian giant’s Belt and Road Initiative (BRI) as a promoter of cooperation of China with Latin America and the Caribbean.

The Venezuelan foreign affairs minister stressed that it is essential to translate into concrete projects the special declaration of the Third Ministerial Meeting of the CELAC-China Forum, which further encourages bi-regional cooperation.

The BRI is an infrastructure project launched by Chinese President Xi Jinping to improve China’s connection with its main partners, among which nineteen Latin American and Caribbean countries stand out.

RELATED CONTENT: CELAC: A Strong and United Voice Before the International Community

In this regard, the Venezuelan top diplomat urged other CELAC countries to support the cooperation proposals that China offers to the world; which arise from the common needs of developing countries. Plasencia emphasized that these proposals are open to consultation under conditions of equality and shared benefits, and they reinforce multilateralism.

He also thanked China for the support provided to Venezuela to overcome the COVID-19 pandemic, with medical supplies, vaccines and experts for the control and management of the virus. Plasencia highlighted the Asian nation’s policies in favor of peace and stability in Latin America and the world, as the Chinese government neither interferes not supports any foreign interference in the internal affairs of sovereign nations.

The Community of Latin American and Caribbean States (CELAC) joins China today for the III Ministerial Meeting of the CELAC-China Forum which brings 32 nations together, led by State Councilor and Minister of Foreign Affairs of China, Wang Yi 🇨🇳 and Foreign Minister @m_ebrard 🇲🇽 pic.twitter.com/i9aGtPTxP4

The Venezuelan foreign affairs minister concluded by asking the CELAC member countries to create the General Secretariat of the Community of Latin American and Caribbean States, which was proposed by Venezuelan President Nicolás Maduro at the last meeting of heads of states held in Mexico this September.

China asks CELAC to work together to overcome difficulties
The President of China, Xi Jinping, participated at the forum through video conferencing, and asked the member countries of CELAC to increase cooperation and work with China to overcome difficulties. President Xi explained that both China and CELAC are facing “global turmoil,” so they should focus on the post-pandemic economic recovery together.

He stated that China’s relationship with CELAC members follows “the principles of equality, common benefit and mutual development,” and hence China has always had a firm commitment to overcome the effects of the pandemic as soon as possible.

President Maduro’s congratulatory message
The President of the Bolivarian Republic of Venezuela, Nicolás Maduro, in the occasion of the 10 years of the foundation of CELAC, praised the work of the regional organization in the construction of platforms for integration and brotherhood among peoples.

“CELAC celebrates 10 years of its creation,” he wrote on Twitter, “and I am proud to have participated in the construction of its first foundations, promoted by Commander Chávez. CELAC is the vanguard of the peoples of the Patria Grande [Latin America and the Caribbean], in union, brotherhood and solidarity.”

CELAC was created in Caracas, on the occasion of the Third Summit of Latin America and the Caribbean on Integration and Development (CALC) and the Twenty-Second Summit of the Rio Group, held during December 2-3, 2011.