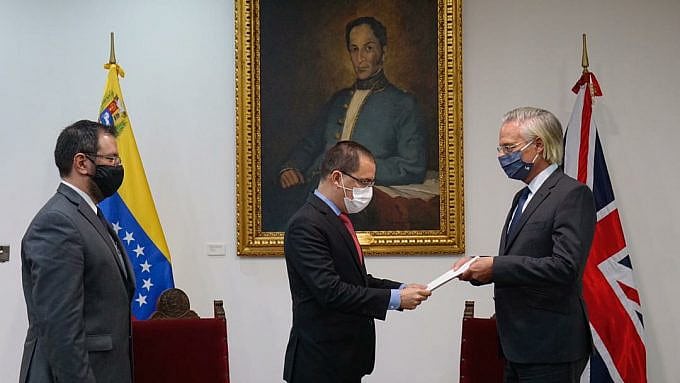 Venezuelan Minister for Foreign Affairs, Jorge Arreaza, delivered a protest note to the United Kingdom Ambassador Andrew Soper on Monday, after an investigation revealed that British public funds were used to finance digital media and organizations without being authorized by the National Government. “We delivered a note of protest to the Ambassador of the United Kingdom in Venezuela, before publications appeared in the media about the use of British public funds for the financing of organizations and digital media in Venezuela, without informing the authorities of the country,” reported the Venezuelan Foreign Minister on his Twitter account.

Local Venezuelan news outlets such as El Universal, Globovisión, Contexto Diario, among others, released this week a study originally published by the British newspaper Daily Maverick, which mentions a millionaire contract between the United Kingdom and some Venezuelan local media companies such as the website Efecto Cocuyo and the Fe y Alegría Radio Institute, as well as the National Union of Press Workers (SNTP).

Some experts in Venezuela have proposed more regulations, like the ones used in the US and Europe, to restrict individuals, NGOs, political parties and news outlets and force them to register as beneficiaries of international funding and in case of failure, make them subject to fines or even criminal charges.

According to reports, the British government illegally financed these institutions under a new project to promote “investigative journalism” in Latin America, which, according to Daily Maverick, “sneakily covers Venezuela.”

According to the press portals, this project run by a European country is destined to “influence the agenda of the media in the country,” and is part of a list of programs that use “independent media” journalism as a tool for regime change.