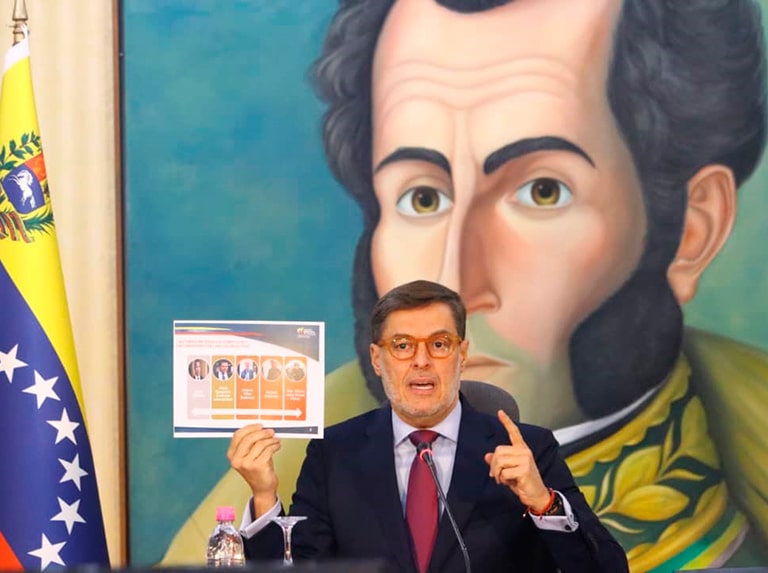 Foreign Minister Félix Plasencia presented this January 19 the evidence to national and international media of the robbery of the Venezuelan Embassy in Bolivia. Photo by Venezuela's MFA.

The Bolivarian Republic of Venezuela demanded this Wednesday, January 19, that the United States government return the Venezuelan assets and diplomatic headquarters in US territory.

At a press conference addressing national and international media, Foreign Minister Félix Plasencia said, “I call on President Joe Biden, and my colleague Anthony Blinken, to respect the rule of law and instruct the corresponding authorities to return the headquarters of our embassy and residence in the capital city of Washington, as well as the headquarters of the Consulate General in New York City, which have been assaulted and robbed from the Venezuelan people.”

“Today they are being destroyed. They must be returned to the legitimate government of President Nicolás Maduro and to all Venezuelans,” reiterated Plasencia.

“As the custodian of these movable and immovable properties,” he continued, “I demand that our headquarter buildings in Washington, the New York Consulate, and the movable property—works of art and archives that are being held there—are returned.”

While the US government, in a fragrant violation of international law, allowed the robbery of Venezuelan diplomatic and consular offices to take place on American soil—in collaboration with former deputy Juan Guaidó and his gang—Nicolás Maduro’s administration on the other hand has been respectful of international law in providing security and protection to the US embassy in Caracas. This situation was recently denounced in a video by a group of US activists who visited Venezuela for the November 21 regional elections. US activist David Paul was among them; he was one of the Venezuelan embassy defenders in Washington DC and was subjected to a criminal trial in the US that lasted several months.

Minister Plasencia, in his speech, also thanked the Bolivian government for the recovery of 11 vehicles that were stolen during Bolivia’s short recognition of Guaidó by another self-proclaimed “president” Jeanine Áñez, when “representatives of Juan Guaidó—head of the gang of international delinquents—destroyed the property of the Republic.”

The minister, who presented evidence of the recovered vehicles, condemned this gang for destroying the library, cultural property and works of art, both in the official residence of the ambassador and in the headquarters of the Venezuelan embassy in Bolivia.

He denounced the presence of this organized gang in Bolivia, which “illegally entered that country to violate the headquarters of the diplomatic representation, destroy and steal assets from Venezuelans,” and that “building an illegal route to facilitate false papers and sell them in the market of that country is a major crime that has criminal and punitive consequences in Bolivia and Venezuela, along with any other civilized country that respects the rule of law and constitutional order.”

The foreign affairs minister also asked the judicial authorities of Spain to respect the Venezuelan legal system, and extradite any criminals who escape from Venezuelan justice and reside in Spain today.