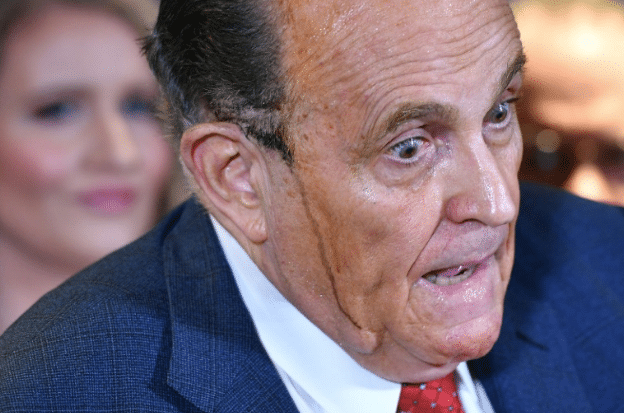 Whereas the US political process has demonstrated all the solemnity of a Hollywood reality show, bona fide elections continue to take place in other nations, where elected leaders try to steer their countries through the morass of an American empire in decline.

“Trump did more for the liberation of humanity from Western imperialism, because of his crudeness, than any other US leader in history,” commented political analyst Laith Marouf. “The latest example was him calling the US elections a fraud. With that he made it impossible to undermine the elections in Venezuela.”

Within the US, Trump and US Secretary of State Mike Pompeo have employed tactics that US-backed politicians have been using on foreign soil for decades: attacking democratic processes, refusing to leave office, exhorting gangs of armed supporters, and crying fraud. Meanwhile US media, who revel in polarizing opinion, have fanned the flames, exposing Trump and his comic entourage’s gaffes for the world. In the process they’ve taken the steam out of their own attacks on Venezuela’s democratic process.

“U.S.’s Pompeo says Venezuelan elections were ‘political farce,’” read an ironic Reuters headline on December 7. “US Condemns Venezuela Election as ‘Charade,’” reported Voice of America weakly the same day. “Venezuela’s Guide to Election Theft,” wrote Wall Street Journal on November 29, eight days before the elections had even happened. “Venezuela’s Election Facade Helps Push Juan Guaido Offstage,” wrote Bloomberg (December 7), referring to Venezuela’s parliamentary elections as “stage-managed.” Like Trump in the US, these outlets were unable to provide any substantiation to fraud allegations, outside of the opinion of a handful of opposition members boycotting the election. Over 90 opposition parties did participate in Venezuela’s parliamentary elections on December 6, won handily by the PSUV/GPP alliance formed in 2012 by Hugo Chávez.

“Venezuelans vote amid allegations of fraud against Nicolas Maduro,” reported Canada’s CBC on December 6, implying that Maduro’s position as head of state was being contested. “Venezuela’s Maduro claims victory in boycotted election,” CBC reported the next day, alongside a photo of a jubilant Maduro, repeating the inaccurate claim. The Canada-led Lima Group, an unaccredited coalition of a dozen or so ever-shifting nations including such bastions of democracy as Colombia, Guatemala, Honduras, Paraguay, and Peru, is committed to overthrowing Maduro.

Venezuela’s elections unfolded without any protests or disturbances. There were no armed militias descending on voting centres — as we saw in Nevada and Arizona, USA — nor gun-toting protestors arriving at politicians’ houses — as in Michigan, USA — demanding an end to vote counting.

Over 200 international observers, including the Latin American Council of Electoral Experts (CEELA) and former heads of state of Spain, Ecuador and Bolivia, attended Venezuela’s elections and none reported any abnormalities. The most dramatic news was that President Maduro changed his voting center at the last minute for security reasons — not far-fetched considering the US placed a $15 million bounty on Maduro’s life.

“This year, however, there is another layer of hypocrisy at play,” wrote Peter Bolton. “Because at the very same time as the US is denouncing an alleged breakdown in democracy in Venezuela as part of a transparent coup strategy, the current administration in Washington is attempting to undermine the result of its country’s own presidential election.”

Nor did former reality-show host Trump help his case when a member of his legal team claimed in late November that Chávez and a cabal of communists had, from beyond the grave, rigged the recent US election. The ridiculous claims were repeated widely by mainstream media and received with great abandon on social media networks.

When they’re not impugning it’s democracy US media attack Venezuela’s free public healthcare system with hyperbolic headlines: ‘The stench is unbearable’: Inside horrific Venezuelan Covid-19 ward,” reported CNN on December 7. In reality, thanks to their partnership with Cuba and China, two nations that have nearly eliminated the pandemic’s spread, Venezuela’s COVID-19 death rate is about 1/25th (or 4 percent) that of the US. More deaths have been recorded in North Dakota, USA, with a population of less than one million, than in all of Venezuela. Biosafety measures at Venezuelan voting centers were lauded by international observers. “There’s no way anyone’s going to get COVID from voting here,” commented medical anthropologist Adrienne Pine.

Finally, as they’ve done so many times, media tried to exaggerate division between Venezuelans: ”Legislative elections leaves Venezuela in political standoff,” reported ABC on December 7, the exact opposite of actual results that will give Chavistas a strong majority in Venezuela’s assembly for the first time in five years. This majority will allow the ruling PSUV/GPP party to pass laws effectively, overcoming the impasse in parliament since 2015.

The reality on the ground is that because of the harm done to everyday Venezuelans by the US policy of economic warfare, encouraged by Juan Guaidó and the most virulent members of Venezuela’s opposition, their coalition lost all the support that they once had among voters. Guaidó and the G4 coalition of political parties doesn’t represent all the opposition — far from it — but they’re the most outspoken in their support of unilateral sanctions, blockades, and US military intervention. In addition, Guaidó and his entourage appropriated billions of dollars in Venezuelan assets, surely not helping to endear voters to their cause.