Diosdado Cabello and part of PSUV directorate during the second press conference informing the results of the party primaries. Photo courtesy of PSUV.

The United Socialist Party of Venezuela (PSUV) held a press conference this Monday night, August 9, and presented additional results of the Open Primary Elections held on Sunday, reporting the results for mayoral candidates in state capitals and major cities, and updating the numbers obtained by the candidates for governor. The candidacies for the governments of Apure, Aragua, Bolívar, Cojedes, Monagas, Nueva Esparta, Sucre, and Trujillo did not manage to obtain the necessary percentage of votes and were sent for review by the PSUV National Directorate.

The Vice President of the party, Diosdado Cabello, indicated that the data of 352 primaries for mayors and governors offices have been received, and only those of six mayors offices are pending. Here is the updated PSUV list of candidates and the votes they received.

“These primaries have to bring us to a position of strength,” said Cabello. “The results must be a guarantee of triumph,” he added, while reading Article 44 of the regulations, which states that “all party members must be willing to give up their candidacy for the inestimable good of unity.”

Based on this, the political high command decided that to be proclaimed winners the pre-candidates for governor must obtain at least 40% of the votes and must receive 10 or more percentage points above their nearest competitor. For mayors, the minimum vote will be 35% and there must also be a difference of 10% over the runner-up, Cabello explained.

If not, “a process of evaluation and review” occurs to confirm candidacies, in order to strengthen each selection and ensure that “the conditions of the campaign benefit unity above all else,” recalled Cabello. “Let there be no irreconcilable positions that divide” party members.

Of the gubernatorial candidacies covered this Monday, eight will be reviewed for not reaching the necessary percentages: those of the states of Apure, Aragua, Bolívar, Cojedes, Monagas, Nueva Esparta, Sucre, and Trujillo. 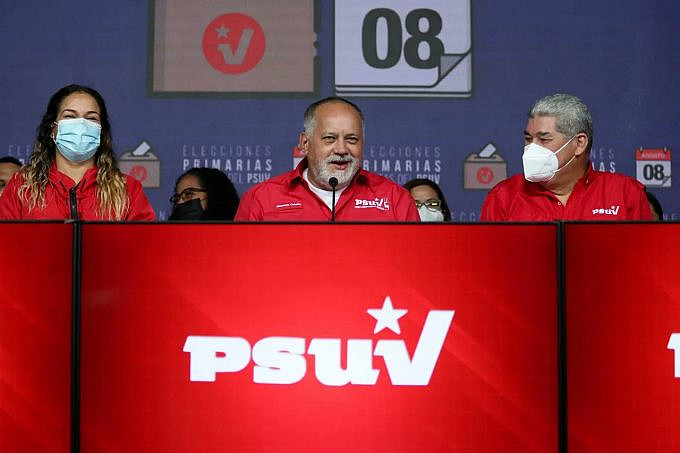 When asked by a journalist, Cabello pointed out that “we still do not have the number of voters who are not members of the PSUV. We applaud the CNE for the procedure that was carried out, since they are responsible for the November 21 elections.”

He indicated that “we would have liked the [voting] centers not to have been combined, or that there had been more machines per center,” but “under these tough circumstances more than 3.5 million people participated and more than 5.5 million attended” to vote. There are “many people from the opposition who are fed up with the coup sectors,” reflected Cabello, asking that they be welcomed. In addition, Cabello dispelled opposition rumors that he is at odds with President Maduro.

“The attitude of the people yesterday was great,” he said.

Cabello also indicated that “the strengths and weaknesses of the process will be evaluated as we go, and I guarantee that we will correct anything wrong. What we did was warm up the arm (a baseball reference). Now imagine if they mess with us!”

In the early hours of Tuesday morning, the full results were published on the PSUV website, which can be seen at this link.

In response to another question, Cabello also explained that a smear campaign had already started, and that media labs were spreading the lie again of an alleged animosity between Diosdado Cabello and President Maduro, because allegedly the candidates closest to Maduro were the ones receiving more votes. Cabello described how he and President Maduro laughed together when discussing this fake news launched by the right, who apparently fail to comprehend how the PSUV realized a tremendous mobilization for participation in democratic processes—an achievement that right-wingers could not envision even in their wildest dreams.

Below are the results read this Monday night by Diosdado Cabello at the press conference:

Mayor of Caracas
Carmen Meléndez: 52.69%, fulfilling both conditions (more than 35% of the votes and 10% margin over the runner-up).

Anzoátegui state
Governorship: Luis Marcano, 71.81% is the winner for meeting both conditions (more than 40% of the votes and a 10% margin over the runner-up).

Mayor of Bolívar (Barcelona)
Sugey Herrera has 38.69%
Guillermo Martínez has 24.71%
The difference is greater than 10%, so “Sugey Herrera becomes the standard-bearer of the party,” explains Cabello.

Anaco:
Jesús Ríos: 44.26%
Maria Palomo: 38.72%
Cabello said: “Despite the fact that Jesús Ríos passed 35%, there is no difference of 10%, so it goes to review.” A number of variables will be considered. “It doesn’t mean that both are eliminated,” said Cabello.

Apure state
Governorship
Pedro Leal: 51.71%
Ramón Carrizález: 45.31%
Cabello explains that there is no difference of 10% between the first and the second, so it will go to review.

Mayor of San Fernando
Ofelia Padrón: 36.98%
The runner-up received only 19.52%, so Ofelia Padrón is the winner.

Aragua state
Governorship
Carina Carpio has 38.6%
Rodolfo Marco Torres has 37.52%
Neither of them reached 40% and the margin of difference did not reach the minimum 10%, so this will go to evaluation, review and consultation.

Girardot Municipality
Rafael Morales received 44.21% and is the winner.

Santiago Mariño Municipality
Johana Sánchez received 51.19% and is the winner.

Bolivar
Governorship
Tito Oviedo: 39.1%
Justo Noguera: 35.82%
Will go to review because neither of the two conditions are met.

Carabobo
Governorship
Rafael Lacava with 65.29% meets both requirements and is the winner.

Puerto Cabello Municipality
Juan Betancourt: 57.94%, met both requirements and had more than 30% margin of victory.

Falcon
Governorship
Victor Clark 72.97%. He surpasses the runner-up by more than 40 points and becomes the winner.

Guarico
Governorship
José Vásquez: 54.16% and is the winner.

Lara
Governorship
Adolfo Pereira: 62.81% and is the winner.

Irribarren Municipality
Luis Reyes: 73.73% and is the winner.

Torres Municipality
Ramón Suárez: 49.4% and 18 points higher than the second, becomes the winner.

Miranda
Governorship
Héctor Rodríguez: 62.12%. He surpasses Claudio Farías by more than 10% and is the winner.

Alto Orinoco Municipality
Mariela López 67.12%
Ramiro Moy 29.45%
Eliseo Silva 3.42%
The transmission has not finished yet because it is one of the most remote municipalities.

Featured image: Diosdado Cabello and part of PSUV directorate during the second press conference, reporting the results of the party primaries. Photo courtesy of PSUV.