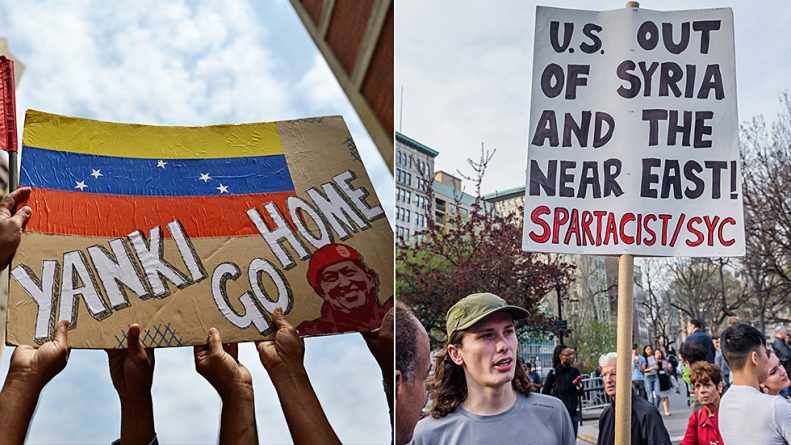 International Opinion
May 14, 2019 orinocotribune Eva Bartlett, Syria, trump lost in space, Trump not knowing what to do, US Imperialism, Venezuela

It echoes the bombastic & hollow humanitarian-crisis type of war propaganda which has been used repeatedly in resource-rich nations, from Afghanistan to Iraq to Libya to Syria. And now we’re seeing it in Venezuela.

The regime-change recipe is straightforward: demonize the leadership and those who defend the country; support an opposition that is inevitably violent and whitewash their crimes; sanction the country & attack the infrastructure to create unbearable conditions; create fake news about humanitarian issues; possibly wage false flag incidents to incriminate the government; control the narrative; and insist that intervention is necessary for the well-being of the people.

In Libya,black Africans are being sold as slaves in a country devastated by Western fake humanitarianism and bombings.

Venezuela has for years been defiantly resisting the economic and propaganda wars, led by the US and Canada, as well as coup d’état and assassination attempts, only to see the anti-Venezuela rhetoric once again ramped up in recent months.

In spite of the wreckage trail that America’s regime change efforts have left over the decades throughout Latin America and the world, when comparing tactics against these countries and now again against Venezuela, some people surprisingly insist that this time it is different.

Venezuela isn’t Syria, they say. This time, they argue, it really is about a ‘corrupt regime,’ and ‘human rights’ — or in the case of Venezuela, a ‘humanitarian crisis’… as if the US has ever had the best interests of any people, including their own, at heart.

They ignore the West’s murderous sanctions against Venezuela and the propping up of the violent ‘opposition’ — an opposition that has burned civilians alive — as well as the millions of dollars spent supporting it. https://www.theguardian.com/world/2017/may/22/venezuela-man-set-on-fire-during-anti-government-protests

Then there’s the more recent violent actions against Venezuela, like the February 23 attempt to ram aid trucks into Venezuela, and the April 30 US-backed coup attempt by Guaido and Leopoldo Lopez (a violent right-wing opposition leader) — an attempt clearly rejected by masses of Venezuelans.

Colectivos, the new ‘Shabiha’
Prior to 2011, the Western corporate media actually had many positive things to say about Syria’s leadership, praising President Assad as an open-minded reformer. When the regime-change operation kicked off, Assad and allies were number one enemies. In both Venezuela and Syria, presidents Maduro and Assad were legitimately elected and retain wide support among the population.

Yet, the Western corporate media and the politicians they echo routinely deem both countries to be “dictatorships” and the elected presidents illegitimate — while backing unpopular and undemocratic puppets they seek to put in place.

It is an utterly disingenuous tactic used to silence the voices of the masses — along the lines of Western corporate media calling those of us who actually question, let alone go to the places in question, ‘conspiracy theorists.’

Venezuela’s shabiha are the colectivos, and are likewise depicted as government-backed thugs, and designated by the US’ actual thugs as ‘terrorists.’

These collectives are organized, grassroots groups of people who come together as educators, feminists, pensioners, farmers, environmentalists, to provide healthcare in their communities, among other things, or in defense of their nation.

In Venezuela, I spent time with the leader of a youth collective of 170 families. The collective helps the community’s youth with their needs and organizes activities for them, as well as providing affordable produce to the local community. During the power outages, this same colectivo supported hundreds of families in obtaining drinking and washing water, and in storing perishable foods.

On March 30, I joined hundreds of members of a motorcycle-taxi union colectivo driving their motorcycles through and around the capital in a show of support for their country and defiance against foreign intervention. These were women and men making a statement with their physical presence: they would not allow their country to be attacked, from within or without.

One of the organizers, acutely aware of how colectivos are portrayed, told me, “We are not terrorists, the terrorists have come with that lackey opposition,” and went on to say that governments bring terrorism to Venezuela.

Another man at the motorcycle demonstration said, “We are suffering because of terrorism that has been implanted through a US puppet named Juan Guaidó. We say to you Guaidó and we say to you Trump: ‘You took away our water, you took away the light, but you ignited our soul, and we are determined to defend the country with our lives if it is necessary.’”

The same bikers later joined up with the tens of thousands of Venezuelan civilians who took to the streets in a festive show of support for President Maduro. Two weeks prior, on March 16, I’d walked for a few hours in another such mass demonstration, filming demonstrators, hearing their opinions on the non-president Guaido, on their support for Maduro, and on their refusal to see their Bolivarian project be destroyed.

Earlier that day, circling around for an hour on the motorcycle-taxi I had flagged down, I searched for opposition supporters who were meant to have converged in multiple points across the city as per Guaido’s calls to take to the streets. In one of the locations I instead found Maduro supporters, and finally in other locations found handfuls of supporters, then a couple dozen supporters in the opposition stronghold, Altimira.

In Syria, mass demonstrations supporting President Assad occurred from the early months of 2011 and in years following.

Sanction the country & attack its infrastructure
The US and Canada have for years put Venezuela under crippling sanctions, a form of collective punishment.

UN Special Rapporteur Idriss Jazairy on May 6 noted the hypocrisy of imposing devastating sanctions and related economic measures and yet it is claimed these help the Venezuelan people.

UN expert Alfred de Zayas aptly calls sanctions a form of terrorism, “because they invariably impact, directly or indirectly, the poor and vulnerable.”

US talking heads downplay the drastic effects of sanctions, but the reality of their effect is staggering.

A recent report estimated that sanctions caused 40,000 deaths in 2017-2018, with 300,000 more Venezuelans at risk. Recently, a six-year-old boy needing a bone marrow transplant and treatment (provided by an association in agreement with the PDVSA, Venezuela’s oil and natural gas company), died as a result of his treatment being denied due to US sanctions on PDVSA.

When I arrived in Caracas in March, it was three days into the first of two major power outages in Venezuela that month. Of the first, the Venezuelan government maintains that the US targeted Venezuela’s power grid, through cyber attack, using electromagnetic pulse devices, and by physical attacks.

Targeting electrical infrastructure isn’t a foreign concept for the US, and during the first outage, even Forbes wrote that, “the idea of a government like the United States remotely interfering with its power grid is actually quite realistic.”

Hours before the power cut on March 7, Marco Rubio foresaw that Venezuela would “enter a period of suffering that no nation has confronted in modern history.”

In Syria, since 2011 terrorists have targeted electricity stations and power plants. Syrians in Aleppo lived for years without electricity, deprived of power after terrorists took control of the district housing the power plant. Those who could afford it bought generator electricity by the ampere.

Following the 2006 Israeli bombing of Gaza’s power plant, Palestinians suffered years of power outages for 18 or more hours a day. At present, Gaza has eight hours of electricity per day.

Clearly, the concept of attacking infrastructure like electricity and water is one the US and allies are intimately familiar with, in order to creating hellish living conditions for the people of the country being targeted.

Starvation & garbage eating crisis
In Syria, every time an area occupied by Al-Qaeda and Co. is being liberated, corporate media screams en masse about starving civilians, thrusting the blame on the Syrian government when in fact every time hunger has been the result of terrorists hoarding and controlling food and aid.

The starving civilians propaganda has resurfaced in Venezuela, with Western media claiming an epidemic of empty-shelved stores and people eating from garbage.

Jorge Ramos, a Univision journalist, claimed to have filmed three men eating out of a dumpster very near – even minutes from – the Venezuelan presidential palace, Miraflores. In reality, Ramos filmed in Chacao, an opposition stronghold nearly 7km from the palace, more like half an hour away in Caracas traffic.

In late March, I walked with a youth colectivo leader I’d gotten to know around the barrio below his Las Brisas district in western Caracas.

To illustrate his point that the Western hype about mass starvation was nonsense, he knocked on doors in the lower-class district asking people we met if they were starving, and whether they’d eaten today. Most we met were confused by the odd question (clearly they haven’t seen Rubio’s Twitter feed).

In the hilltop housing complex of Ciudad Mariche, locals likewise were adamant that there isn’t a humanitarian crisis. One man told me: “We’re not starving. We have many general problems, but not starving. This is not a humanitarian crisis. Say to your governments, this isn’t a fight against Maduro, this is a fight against a people that are trying to be free.”

Any state other than the US in Syria, Venezuela, ‘illegal’
According to the bully of the world, only the US has the right to intervene in sovereign nations, in spite of the fact their uninvited intervention is illegal.

The US has threatened Venezuela’s allies, including Cuba and Russia, bizarrely claiming Russia was intervening in Venezuela without the government’s consent, a claim which runs contrary to the bilateral agreement Russia and Venezuela have.

The hypocritical posturing of the US hasn’t dented Russia’s alliance with Venezuela, with Moscow announcing the intent to create a “UN coalition of countries to ‘counter’ the eventual invasion of Venezuela by the US.”

In any case, like Syria, Venezuela will not be overtaken so easily, with its armed forces of 200,000 and its nearly 2 million militias preparing to defend their land.