Earle Herrera as deputy during a heated speech in the National Assembly under the control of extreme right politicians defending Chavismo. File photo.

Through his Twitter account, Venezuelan Minister for Communication and Information Freddy Ñáñez announced the passing of prominent journalist and remarkable Chavista Earle Herrera. “I am very sorry for the death of Earle Herrera, an institution in journalism, a lucid man and faithful to ideas,” wrote Ñáñez. “His articles accompanied us with humor and intelligence on sunny and rainy days, and now with his silence he will continue to demand more from us. Until we meet again, maestro.”

Born in El Tigrito, Anzoátegui state, on April 23, 1949, Herrera was an outstanding professor at the Central University of Venezuela’s School of Communication. He was a deputy in the National Assembly since 2006, and a member of the 1999 and 2017 National Constituent Assemblies. He was awarded the National Journalism Prize four times, and published dozens of books in addition to articles, essays, and poetry. His wife was the journalist and university professor Asalía Venegas (1950-2019), with whom he had two children, Argimiro and Simón.

• Venezuelan President Nicolás Maduro said: “Today Earle Herrera departed to eternity, a man of the word, a brilliant journalist and an indispensable revolutionary. With great pain and sorrow in my heart, I express my condolences to his family, friends and relatives. Your example will continue to live among us, maestro.”

• The Minister for Culture and journalist Ernesto Villegas wrote: “It shocks, hurts and puzzles, but, looking at it well, it is not surprising. You went after Asalia to whisper to her: ‘I love you beyond life/ I revive to love you beyond death.’ To Simón, Argimiro, and other family members, friends, disciples and comrades, a big abrazo. Long live Earle!”

• Venezuelan deputy Diosdado Cabello wrote on his Twitter account: “Earle Herrera, dignity and solidarity in every act, in every response, fly high dear brother! Very hard news. You remain among your comrades forever, Honor and Glory to you, warrior of the Homeland. Venceremos!”

• “Shocked by the news of the death of Earle Herrera,” said Felix Plasencia, Venezuelan Foreign Affairs Minister. “He leaves us as an incomparable man, an exceptional journalist, a first-rate writer, one of the most renowned university professors in the country, and a deputy who always knew how to convey the voice of the people to parliament.”

• Lucía Córdoba, Venezuelan journalist, wrote: “Goodbye my beloved teacher Earle Herrera. What you taught us—in other words, doing good journalism—I carry as one of the greatest treasures. Thank you for your word, that you always expressed without hesitation, for your honesty and integrity, for your wisdom, simplicity and good humor.” 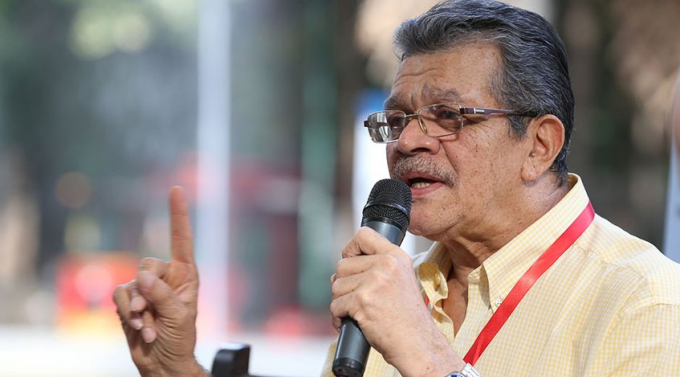 • Journalist Carlos Carreño said: “A man of journalism, without mincing words, with a curious sense of humor… You departed to meet your love,” referring to Herrera’s wife, Asalia Venegas, who passed away in 2019. “Rest in peace, Professor Earle Herrera.”

• “I deeply regret the death of Earle Herrera,” wrote Larissa Costas. “I always saw him with a smile. An exceptional sense of humor. An honest and caring man. May relatives and friends receive the words of condolences from the Costas Manaure family.”

• The journalist Jessica Sosa wrote: “He leaves us the light that he lit in the hearts of his students. He leaves us his poetry, his articles, his program El Kiosco Veraz [The Kiosk of Truth]. He leaves with Asalia, to continue loving her. Goodbye maestro!”

• Miguel Pérez Pirela, Venezuelan philosopher, wrote: “I deeply mourn the departure of Earle Herrera. Great and admired friend. Man of ideas. Intellectual of praxis and social transformations. A man consistent with his convictions. Beloved Earle, from the roof of the whale to this day you never gave up! I cry deeply!”

• Elías Jaua wrote: “Earle in the chair, Earle in the university march, Earle in the assembly in the Great Hall reciting, Earle my bench-mate in the 1999 Constituent Assembly, Earle my friend since then. Together with Earle in the resistance against the fascist coup of April 11… Earle, goodbye!”

• The official account of the National Book Center wrote: “Earle Herrera began from the game (and the struggle) of life. But he stays with us in his books of fiction and poetry, essays, reports and journalism, his fine humor, his love for the country, for which he was the featured writer of FILVEN 2020. Goodbye, Earle.”

• The musician Gerardo Valentín tweeted: “Earle Herrera was one of the most conciliatory politicians in the stages of greatest conflict. Without compromising his beliefs, he always opened debate with respect. We very much regret his departure, and we will miss his program (always entertaining and thoughtful),” in reference to his weekly Sunday show on publicly owned television network VTV, El Kiosco Veraz.

Featured image: Earle Herrera defended Chavismo during a heated speech in the National Assembly under the control of extreme-right politicians. File photo.