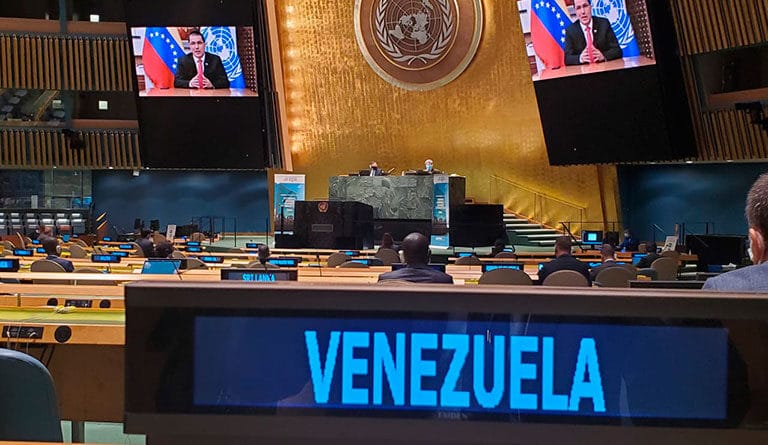 “We ratify the Venezuelan Government’s commitment to multilateral cooperation against corrupt practices, in favor of transparent management and equitable power relations, on the political, economic, public and private levels,” Arreaza stated during his speech, via videoconference, at the special session of the United Nations General Assembly against Corruption.

The top Venezuelan diplomat denounced “the criminal application of an economic blockade and unilateral coercive measures which, as acts of unquestionable corruption, have frozen assets of more than $30 billion belonging to the Republic, that was destined to guarantee the food and healthcare to the people, particularly in the midst of the COVID-19 pandemic.”

“We are referring to a form of corruption induced from centers of power with geopolitical intentions,” added the Foreign Affairs Minister. “A good part of this wealth has fallen into the accounts of corrupt politicians, legal offices, and even the dark hands of the United States government.”

Arreaza stressed that economic and political solutions must respond sine qua non to public welfare, especially for the most vulnerable.

In that sense, he indicated that holding a public or private position “entails a great social responsibility that must be honored at all times.”

“No society is exempt from the scourge of corruption, both on its public and state levels, as well as in the typically obliged private dimension, which is structurally protected by an economic model that rewards exploitation and usury, and that promotes the concentration of wealth in few hands and generates an inequitable and unequal society. There is no public corruption without a private corruptor,” he said.

He denounced that “these established and ingrained exploitation schemes are the main cause of the most widespread and lamentably evident corruption practices, which constitute a serious affront to the pillars of the United Nations, especially human rights.”

He pointed out that the Venezuelan State has acted firmly against corruption at various levels and pointed out that “it maintains a permanent improvement in the application of mechanisms based on the Law against Corruption and Safeguarding of Public Assets.”

Likewise, it reported that Venezuela, as a signatory state to the convention, from June 7 to 10 of this year will begin the second cycle of the review examination of the application of the Convention against Corruption, covering the period 2016-2021.

Arreaza stressed that this examination confirms Venezuela’s commitment to the convention.