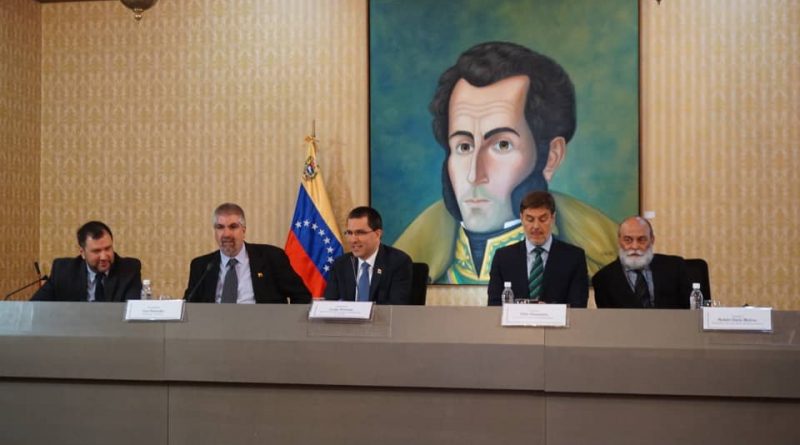 Chancellor Jorge Arreaza, made a working tour through various countries of the world, with the aim of strengthening bilateral relations in the European, Asian and African continents.

The tour began at the end of March on the African continent. There he visited Namibia, where he met with the president of the nation, Hage G. Geingob; the vice president, Nangolo Mbumba; the President of Parliament, Peter Katjavivi; as well as with the Deputy Prime Minister and Minister of International Relations, Netumbo Nandi-Ndaltwah, who expressed their desire to expand cooperation with Venezuela on issues such as mining, housing, education, culture, energy and agriculture.

The meetings were held within the agenda organized for the diplomat Arreaza in Pretoria, Republic of South Africa, where he participated in the Conference of Solidarity with the Sahrawi Arab Republic and in support of the struggle of the African people.

“The peoples of Africa, of our America and of the world are supporting the Venezuelan Constitution, international law and rejecting any kind of intervention in the internal affairs of Venezuela,” Arreaza said through a TV broadcast from the Ministry of Foreign Affairs headquarters.

Europe
From Africa, Arreaza arrived on April 1 in Turkey, Eurasian nation, where he held a meeting with his Turkish counterpart,  Mevlüt Çavuşoğlu, in which they reviewed multilateral and bilateral cooperation in various sectors.

At the meeting the Turkish foreign minister stressed that Turkey rejects the unilateral coercive measures that are sought to be imposed against Venezuela and against any country.

RELATED CONTENT: Bashar Al-Ássad: “What is Happening in Venezuela is Similar to Syria”

He also met with the director of the University of Ankara, Erkan Ibis, who stressed that they are closely monitoring the coercion that the United States government is seeking to implement against Venezuela.

“In Turkey, the father of the country, Mustafa Atatürk, taught imperialism a lesson. We are sure that (Venezuelan President) Nicolás Maduro will do the same”, said Ibis, the Venezuelan Foreign Ministry reported through its Twitter social network account.

In the Turkish nation he also met with the director of the Center of Studies of the University of Ankara, Neyiti Kutlunand with the Minister of Energy and Natural Resources of Turkey.

On the other hand, the head of the Foreign Ministry, attended the Republic of Serbia, where he met with the Deputy Prime Minister and Foreign Minister, Ivica Dačić, (a meeting) in which they discussed the political and strategic alliances that have been generated in recent years between both nations.

Middle East
As part of his work tour, the foreign minister visited the Lebanese Republic, where he had a meeting with Lebanese President Michel Aoun, in order to reaffirm ties of respect, solidarity, friendship, cooperation and bilateral cultural exchange.

From Beirut, the Lebanese capital, he also met with the Minister of Foreign Affairs and Emigrants of Lebanon, Gebran Bassil, with whom he analyzed the geopolitics of both nations.

During the visit of the Venezuelan diplomat to Lebanon, Arreaza participated in a Solidarity Assembly, which was attended by various political parties and social movements to express their support for the Venezuelan people and government.

After completing this visit, Arreaza stressed that “Lebanon is an independent country that respects international law and multilateralism and we have that in mind. We have great potential for cooperation, for commercial exchange, for energy consulting from Venezuela, now is when we are going to open a new stage in relations with Lebanon. ”

Later he traveled to the Syrian Arab Republic, where he strengthened the bonds of friendship and solidarity with the Middle Eastern country.

Through his Twitter, Arreaza also noted that “In Syria we see how unjust and criminal wars are. The sequels of destruction and pain are profound. Observe how in the town of Malula, terrorists supported by the imperialists destroyed the oldest Christian temples, now under reconstruction,” in reference to one of the attacks of the Al Nusra Front, supported by the US government against the town of Malula, one of the oldest Christian centers in the world that still retains Aramaic as a language.